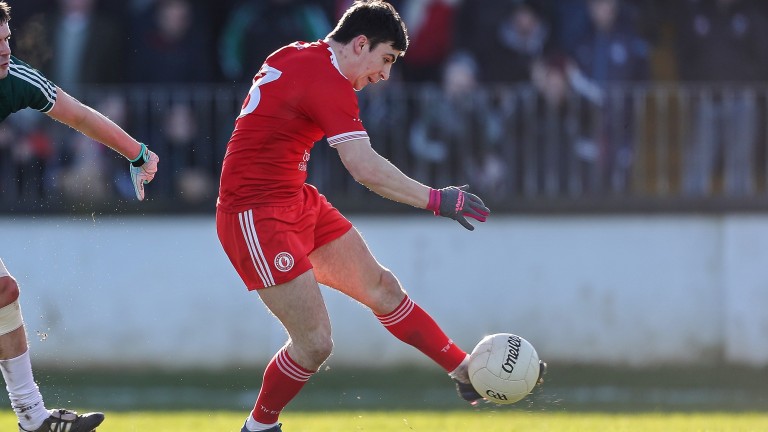 Lee Brennan is flourishing up front for Tyrone
INPHO/Laszlo Geczo
1 of 1
By David Jennings UPDATED 1:12PM, MAY 11 2018

Dublin deserve to be odds-on and Stephen Cluxton lifting the Sam Maguire for a fifth time on the second day of September is the most likely final scene to the 2018 All-Ireland football championship.

But, there are better oods-on shots running around tracks such as Towcester and Tramore on a Tuesday evening who have far less to beat than the Dubs, so the advice is to stay away for the time being.

The market suggests Kerry are the second-best team around and Mayo next in the pecking order but it could be argued that Tyrone are in the best position to tackle Dublin and now is the time to cash in on some attractive prices about Mickey Harte’s men.

Before their All-Ireland semi-final with Dublin, everyone was pointing out that the Dubs had not been tested in 2017 and that they might be vulnerable. Perhaps Tyrone were the vulnerable ones, though, as they had won every game by eight points or more on their way to their showdown with the champions.

Tyrone could not afford to concede an early goal against Dublin, though, so when Con O’Callaghan rattled the net inside the first ten minutes it was game over. They are not the sort of side who can chase a game. They need to set the pace and then sit back and play on the counter-attack.

Tyrone are chasing a third Ulster title on the trot, something Harte has never achieved in his lengthy spell at the helm. They have been the dominant force in what is billed as the most competitive of all the provinces. It’s not. Tyrone are streets ahead of the pack.

Sean Cavanagh has retired but this Tyrone team look stronger than ever with Harte finally giving the clinical Lee Brennan a chance to flourish up front.

Brennan blossomed this spring and so did Tyrone in the latter stages of the league. The first four rounds were frustrating for followers of the Red Hand County. They were awful against Galway in round one but were every bit as good as Dublin for 50 minutes in round two and outplayed Monaghan for long periods in round four only to pay the price for wayward shooting and several missed goal opportunities. They were the better team by at least four points in that clash.

Format
The significant change in format to this year’s All-Ireland Senior Football Championship is that the quarter-final knockout round that follows the qualifiers is to be replaced by two four-team groups, known as the Super 8s.

Tyrone finished their league campaign with three straight wins against Donegal (2-13 to 1-10), Mayo (2-14 to 0-8) and Kerry (1-16 to 0-14). Their five-point defeat of the Kingdom, despite Ronan O’Neill missing a penalty, was their first over Kerry in eight years, teeing them up perfectly for the summer ahead.

Tyrone are no bigger than 5-4 to win Ulster and, if they complete the provincial hat-trick, they will enter the Super 8s in Group 2 alongside the Leinster winners, highly likely to be Dublin. That will give them a crack at the All-Ireland champions in the group stages but, most importantly, means that they will not meet them in an All-Ireland semi-final.

Tyrone should fear no team outside Dublin and the new format is right up their street. They are 12-1 to go all the way in 2018 and that makes plenty of appeal from an each-way perspective given that they are likely to avoid the defending champions in the last four.

Whatever your opinion of Tyrone and, even if you believe their chances of All-Ireland glory are remote, you will struggle to make a case for them not reaching the All-Ireland semi-finals again. They have all the necessary ingredients to go far and the advice is to snap up the odds-against available about them getting to the last four. That looks more than generous.

Mayo appear to have been written off by the experts as Galway’s price to win another Connacht championship continues to tumble, but Stephen Rochford’s charges have the Tribesmen in Castlebar this time and it would be a surprise if they don’t reach the All-Ireland semi-finals.

Given their ability to peak in August and early September over the last couple of years, the new Super 8 format will suit them as much as anyone. Their veteran performers have one more year to reach the Promised Land so do not expect them to lie down lightly.
Kerry appear to be in a transition phase and, apart from their 1-15 to 2-9 win over Mayo in round two when playing most of the second-half with 13 men, there was little to get excited about in the league.

Recency bias has everyone purring about Galway but they gave the league 100 per cent while most of the other teams in the top tier were experimenting. They are progressing fast under Kevin Walsh but there is a suspicion that the likes of Mayo could catch up with them in the championship.

The rest should not make an impact. Even the most enthusiastic Kildare supporter would not expect them to lift the Sam Maguire in 2018 but odds of 11-8 about the Lilywhites reaching the Super 8s looks good value.

They are on the easy side of the draw in Leinster, avoiding Dublin until the provincial decider and swerving Meath too. They play Louth or Carlow in the Leinster quarter-final and, if they win that as they should do easily, they would face either Westmeath, Laois or Wexford in the semi-final. They would be 1-3 or shorter to win those two games and another Leinster final joust with Dublin should set them up nicely for the final round of the qualifiers.

A victory in round four of the qualifiers would see them through to the Super 8s so odds of 11-8 about them getting there look well wide of the mark. They should be odds-on.

Kildare have seven rounds of Division 1 league football so are better equipped to cope with the physical demands of the championship than most and in Kevin Feely, Daniel Flynn and Niall Kelly they have a trio of seriously talented footballers who would walk into most sides in the country.

Cian O’Neill is making progress, despite relegation from Division 1, and there is no way they should be 11-8 to make the make the top eight.