Tyrone can finish on top of the pile after promotion

Donegal are surprise candidates for drop 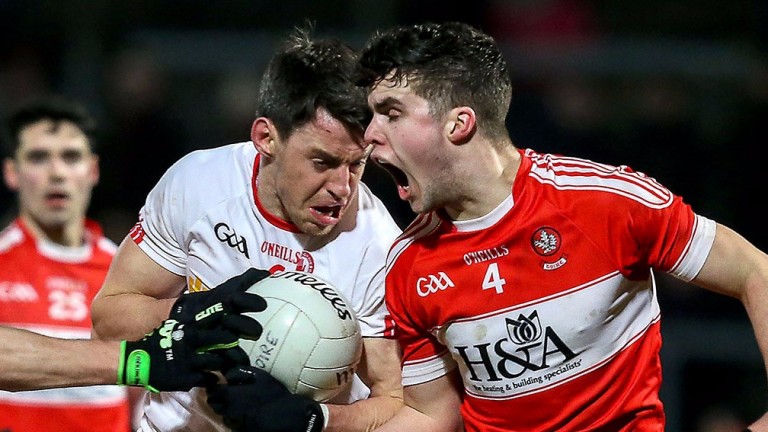 Only two teams have won National Football League Division One since the turn of the decade. Cork won it in 2010, 2011 and 2012 before Dublin’s domination began. The Dubs are chasing five in a row and the 11-8 Boyle­Sports are offering about that happening will appeal to plenty.

But the top tier has never been more competitive. Down and Cork have been replaced by Tyrone and Cavan, ensuring there will be no whipping boys in the division, and Dublin have to travel to Kerry in round five so topping the table might not be as straight­forward as in previous seasons.

Dublin are likely to improve as the year goes on and it could be a case of them sneaking into the top four and exploding into life once reaching the semi-finals. It is worth remembering that while they have lifted the trophy for the last four years, they topped the table in only two of those years.

With that in mind, the most appealing market in Division One is who will finish top and Tyrone look the value.

Mickey Harte’s men went unbeaten through Division Two last term and something similar could happen this term despite the rise in class.

Tyrone have already won the McKenna Cup, showing no signs of rustiness in disposing of Derry by 2-13 to 1-7 in the decider at Newry last Saturday night. Peter Harte, Mattie Donnelly and Ronan O’Neill all played in that game and they look especially keen to start the campaign on the front foot.

Tyrone’s first game is against Roscommon, probably the poorest side in the division, at home in Omagh on Sunday. A wide-margin win looks in store there and that should set them up for a successful spring.

Although they face a trip to Croke Park to face Dublin in the second round of fixtures, rounds three and four are against Cavan and Monaghan at home and they should have at least three wins out of four by the time they travel to Donegal in round five.

The brand of football Tyrone play suits this time of year. Possession is paramount, they are super-fit and they are a few years into their cycle with the current crop of players. They possess quality forwards now and also have a terrific home record in Omagh. They are not expected to drop any points at home.

Dublin might lift the cup once again, but it could be Tyrone who make most of the running.

From a relegation point of view, Donegal could be surprise packages.

They have to tackle Kerry and Dublin in two of their first three games and it is hard to envisage them getting any points out of either outing which will leave them fighting to keep their heads above water from an early stage.

They are likely to need some­thing from their final fixture but a trip to Castlebar to take on Mayo is not appetising.

Division Two looks weak with none of the sides capable of challenging for All-Ireland honours in 2017. Cork are favourites but they were poor during the last campaign and Galway are one side who have definitely progressed over the last two years.

Kevin Walsh has been given time and, while it was disappoint­ing to see them exit the All-Ireland race so tamely at the quarter-final stage last year, they were still crowned Connacht champions and should be entering the new campaign in a good frame of mind.

They appear to have unearthed a gem in Barry McHugh from the Mountbellew/Moylough club. He kicked six points, four from play, in the comfort­able FBD League final triumph and looks the natural scoring forward the Tribesmen have been searching for. Johnny Heaney looks to have a new lease of life at wing-back and there is a nice blend of youth and experience in the side.

The fact that Galway play Cork and Derry in Pearse Park is a big bonus and victory over the Rebels in round one would quickly see them become short-priced favourites for the title.

Tipperary could struggle to repeat their heroics of 2016 when they reached the All-Ireland semi-final and Division Three could turn into a shootout between Laois and Armagh. At 9-4 the Orchard County are favoured.

Seamus ‘Banty’ McEnaney has taken over at the Wexford helm and he is the sort of manager who could have an immediate impact. He is full of ambition and enthusiasm and winning Division Four looks his sole chance of silverware in his first season.