Twitchy Tiger may stumble at first on comeback

Woods under huge pressure to impress 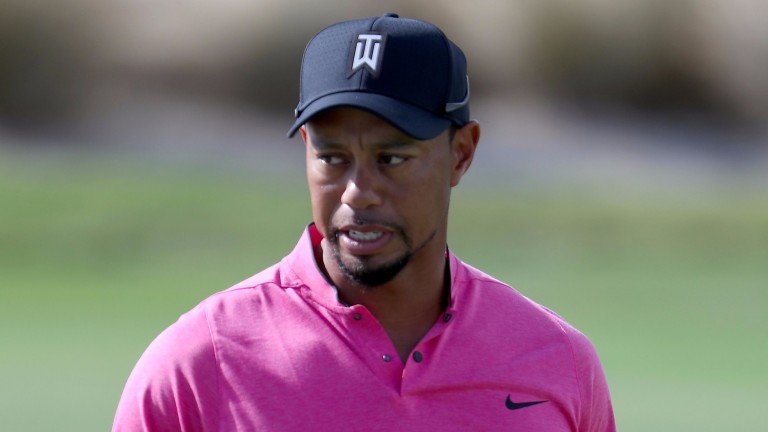 Tiger Woods could find himself under early pressure at Albany
Christian Petersen
1 of 1
By Steve Palmer 8:04PM, NOV 30 2016

Golf fans the world over will fall silent in unison today when living legend Tiger Woods approaches the first tee in the Bahamas for his latest comeback. The antici­pa­tion of his opening drive in the Hero World Challenge is immense.

With that intense scrutiny comes massive pressure and the strong possibility of a terrible shot. Even when in his pomp, Woods was prone to buckling under first-tee nerves, and more recently it has been even worse. He has bogeyed his first hole in his last three Opens.

BoyleSports have issued a raft of Tiger specials for the Hero and their 3-1 about him carding bogey or worse on the first hole is the most attractive offer. Woods, with more than 15 months of competitive rust in his system and lots of new equipment in his bag, seems likely to struggle for par or better on the 451-yard par-four first. The first is the fifth-toughest hole on the scorecard.

Woods starts the latest stage of his career at high-noon local time – 5pm UK and Ireland time – alongside the man who has laid claim to his Sunday red. Patrick Reed always wears a blood-red final-round shirt, copying the style made famous by Tiger.

Reed, runner-up in last year’s Hero, seems likely to outscore Woods in their twoball, but better value lies in two earlier matches. JB Holmes can be fancied to account for Zach Johnson in the 4.30pm duel, while Jordan Spieth looks a strong option against Matt Kuchar.

The Albany track being used this week has five par-fives, all of which are open and inviting, so aggressive big-hitters such as Holmes are licking their lips. He outscored Johnson in last year’s Hero, closing with a 64, and can be expected to repeat the dose.

Spieth won the Australian Open 11 days ago and the last time he did that, the cocksure Texan followed up with a runaway Hero triumph. With short-game confidence restored from his trip down under, expect Spieth to go well again at a course where he finished fourth 12 months ago. Kuchar, who missed the cut by five shots on home turf in the RSM Classic last time out, finished 14th of 18 last year.

The four players who have trekked to the Bahamas from the World Cup of Golf in Australia are entitled to feel some mental fatigue. Rickie Fowler is in the same boat as Russell Knox, but the American is more likely to overcome the handicap than the Scot, and can win a 72-hole match. Fowler, who led the United States to a share of second place in the World Cup, was third at Albany last year, while Knox is making his course debut.

Woods is 11-4 favourite with Sky Bet to finish last, but Knox is superior value at 16-1. Knox is one of only six players in the field who have not competed at Albany, one of whom is Woods, an Albany member who has countless practice rounds under his belt there. Henrik Stenson, Louis Oosthuizen, Emiliano Grillo and Brandt Snedeker are the others.

Lack of course experience, an unsuitability to the layout, married to the fact Knox has had a hectic recent schedule – Malaysia, China, Mexico, Australia and the Bahamas in just over a month – could result in a Hero flop. The each-way terms are a fifth the odds the first four.