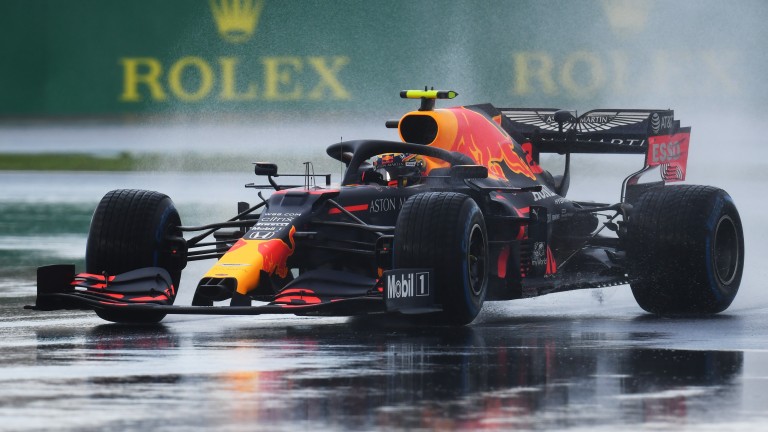 Alexander Albon splashes his way around the Istanbul Park circuit in qualifying
Clive Mason
1 of 1
By Adam Scriven 5:30PM, NOV 14 2020

Free F1 tips, best bets and analysis for the Turkish Grand Prix at Istanbul on Sunday.

There's nothing like a downpour for shuffling the Formula One pack, and that was certainly the case in qualifying for the Turkish Grand Prix where Mercedes' 2020 stranglehold on pole positions was finally broken at the 14th attempt.

Lance Stroll was one of a handful of drivers to make the intermediate tyre work for him on the damp track and the young Canadian, who had been a 66-1 shot to be the fastest qualifier, registered a first career pole position for Racing Point.

More showers are forecast for race day but bookmakers don't rate his chances of taking the chequered flag first, and Stroll is available at 20-1.

For much of the session, and indeed all weekend, Max Verstappen had been in a class of his own. After the initial runs in Q3, the Red Bull driver lapped the Istanbul Park circuit four seconds quicker than anyone else.

With Mercedes struggling on the slippery newly-resurfaced circuit, Verstappen looks to have an open goal from second on the grid and odds-on quotes are understandable.

The Dutchman won the second Silverstone race and has five second places this season. He was on course to finish second again at Imola last time before a tyre failure ended his race, and reliability is probably his biggest threat.

Lewis Hamilton will seal his seventh world title if his Mercedes teammate Valtteri Bottas fails to score eight points more than he does. With Hamilton starting sixth and Bottas ninth it looks a formality, though the Brit can sometimes lose interest in a race when he has no chance of winning.

Under normal circumstances Hamilton would be of interest at 9-4 even starting sixth, but Mercedes for once seem to have got something wrong with their set-up this weekend.

Verstappen's Red Bull teammate Alexander Albon is fighting for his future after scoring just one point in the last four races.

But the Anglo-Thai driver is enjoying a relatively strong weekend in Turkey and lines up fourth on the grid.

Struggles in qualifying have often been blamed for Albon's disappointing performances and he looks a decent price to pick up a second career podium finish with the Red Bull flying at this circuit.

FIRST PUBLISHED 5:30PM, NOV 14 2020
Mercedes for once seem to have got something wrong with their set-up this weekend