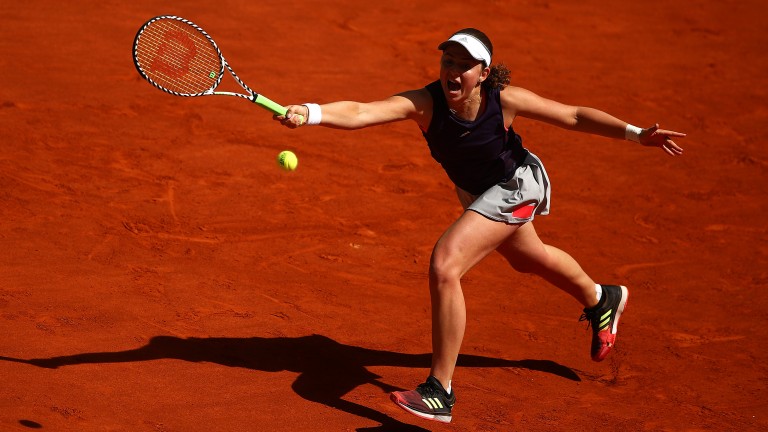 Jelena Ostapenko, French Open heroine in 2017, looks to be coming to the boil with Roland Garros approaching
Julian Finney
1 of 1
By Adrian Humphries 2:05PM, MAY 14 2019

Jelena Ostapenko has been showing signs of a resurgence on clay and the Latvian probably ought to have too much on the slow terrain for Mihaela Buzarnescu in Rome.

Not that Buzarnescu, 31, is a below-average performer on clay, because she isn't. However, the late-developing Romanian, while adept on the red courts, has done her best work on hard courts and in the USA.

So this looks a decent chance for Ostapenko, who bludgeoned her way to French Open glory in 2017, to add to the promise of her outings in Madrid last week.

This will be the pair's fourth meeting. Buzarnescu won their first clash 6-1 6-3 on a Doha hard court early last year, but Ostapenko has since nosed ahead in their personal series following a 6-1 6-2 win on grass in Eastbourne last summer before avenging that Qatar loss when triumphing 6-1 4-6 6-2 in the emirate state earlier this season.

So as this will be their first clay meeting, it's no surprise to see Ostapenko installed favourite.

At the Magic Box last week Ostapenko hammered Anastasia Pavlyuchenkova 6-2 6-1 before coming up short against red-hot Kiki Bertens, who went on to lift the trophy, 6-4 6-3 in the last 32. That looks pretty decent form to be taking to the Italian capital.

Buzarnescu's effort in Madrid was a similar one - she defeated Ajla Tomljanovic in straight sets before losing to Anastasija Sevastova in quick time. But in terms of progressiveness, Ostapenko looks the one with better claims of victory in their Foro Italico opener.

Little appeals on the men's card, on which in-form Budapest champion Matteo Berrettini, a native of the Eternal City, has been well backed to upset world number four Alexander Zverev.