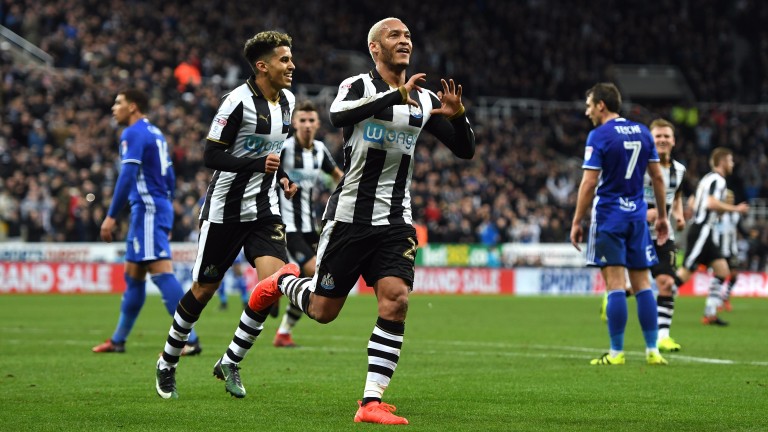 Newcastle average 2.21 points per game on their travels this season – more than any team in the top four divisions – and are worth backing to defeat Wolves at Molineux.

It is another massive game for the Magpies, who are determined to cement the top-two status that they have held since mid-October.

Wolves have shown an appetite for the big games this season – dumping Premier League Stoke and Liverpool out of the FA Cup and defeating Newcastle 2-0 in last September’s league meeting at St James’ Park.

The Wolves defeat was damaging on another level because it was the moment Newcastle midfielder Jonjo Shelvey got involved in a war of words with Romain Saiss which triggered a five-game ban after Shelvey was found guilty of racial abuse.

Shelvey’s ban covered four league games and included 1-0 defeats at home to Sheffield Wednesday and away to Blackburn.

Newcastle are a better team with Shelvey in the side but punters must decide how well he will handle the occasion, with Wolves fans certain to make their feelings known.

The Magpies will be without top scorer Dwight Gayle – back in training but not deemed fit to return to the squad – while midfielder Isaac Hayden, who limped off during the first half of last Saturday’s 1-0 win at home to Derby with an ankle knock, is a doubt.

But Newcastle have one of the strongest squads in the division and their counter-attacking 4-2-3-1 formation is perfectly suited to getting victories on the road.

It will suit them that Wolves are likely to get on the front foot.

Paul Lambert’s side will be keen to draw a line under last Saturday’s 2-1 loss at Burton which probably ended any talk of them making a late dash towards the playoffs.

The rest of the season will be about making sure they are safe and putting the building blocks in place for a serious promotion push next term.

Wolves have made progress under Lambert but their home record – four wins, three draws and six defeats – is poor for a club of their stature and it could get a bit worse after they have faced the Sky Bet League’s awayday experts.

Team news
Wolves
Ivan Cavaleiro, Joe Mason and Mike Williamson are out but Romain Saiss is back from the Africa Cup of Nations. Jordan Graham and Michal Zyro are out long-term.

Newcastle
Dwight Gayle is back in training but won’t feature. Jack Colback and Isaac Hayden are doubts. Vurnon Anita and Rolando Aarons are out but Chancel Mbemba and Christian Atsu are available after Africa Cup of Nations duty.