Exacting test can bring best out of Nairo Quintana

Tour promises to get much more serious in next two days 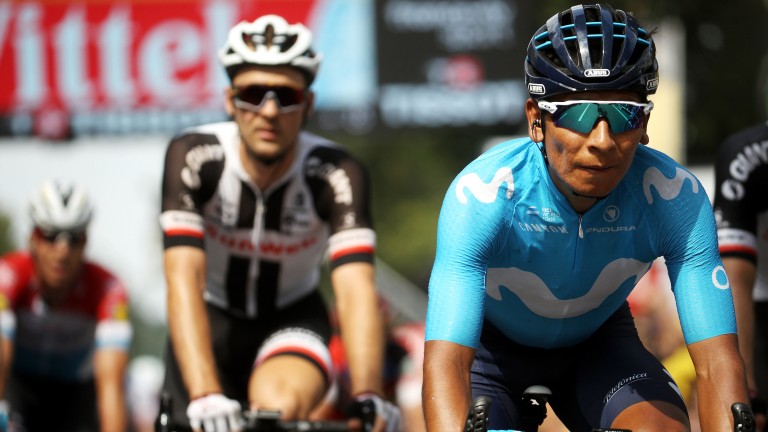 The first of three days in the Alps on Tuesday failed to bring about a major shake-up in the race for the yellow jersey as Julian Alaphilippe claimed France’s first stage win of this year’s Tour from a breakaway.

Indeed, race leader Greg van Avermaet was able to extend his advantage at the top of the general classification to more than two minutes with a remarkable fourth-placed finish on the day. However, whether the Belgian will still be in possession of the leader’s jersey by the end of Thursday's stage to Alpe d’Huez is extremely unlikely.

After a relatively sedate opening the Tour promises to get much more serious over the next two days with two summit finishes that should see the genuine contenders leave the safety of their teams behind and begin to stake their claims on the Maillot Jaune.

The first of those Alpine tests is a 108.5km route from Albertville to La Rosiere that is nearly identical to stage six of this year’s Criterium du Dauphine, with super-category ascents of the Montee de Bisanne and Col du Pre, a category-two climb of the Cormet de Roselend before the action reaches a crescendo on the slopes of La Rosiere - a 17.6km effort at an average gradient of nearly six per cent.

Geraint Thomas, second in the overall standings, Romain Bardet, Dan Martin and Adam Yates all rode the Dauphine so will know what to expect from today’s exacting examination. For the other GC contenders, such as Chris Froome, it will be a journey into the unknown but you can bet that the meticulous Team Sky will have learnt from Thomas’s experience at the Dauphine and have a plan in place to attempt to land an early blow on their rivals.

Using the first summit finish as a launchpad to stamp authority on the race is a tactic Sky have regularly employed at the Tour.

It is therefore no surprise to see Froome towards the head of the market, although there is a suspicion that he could be attempting to replicate the blueprint of his Giro d’Italia success, which was based around him peaking in the final week of the race.

If there is a team who can match Sky in the mountains then it is undoubtedly Movistar.

The Spanish outfit have a battalion of climbers at their disposal, although who they are riding for is a real conundrum.

Movistar have three prospective leaders in their ranks, with Alejandro Valverde currently in third place, Mikel Landa in eighth and Nairo Quintana a minute or so further back in 18th.

Colombian Quintana has been playing catch-up since stage one when he suffered a mechanical in the final 5km, which saw him lose nearly a minute on his rivals.

However, since then he has been quietly going about his business and exceeded all expectations on the hellish cobbles on Sunday to finish in 24th place while the carnage ensued behind him.

Given his climbing brilliance he is still probably just about Movistar’s number one option and a big performance on the mountainous terrain on which he excels would reaffirm that position heading into the second half of the race.