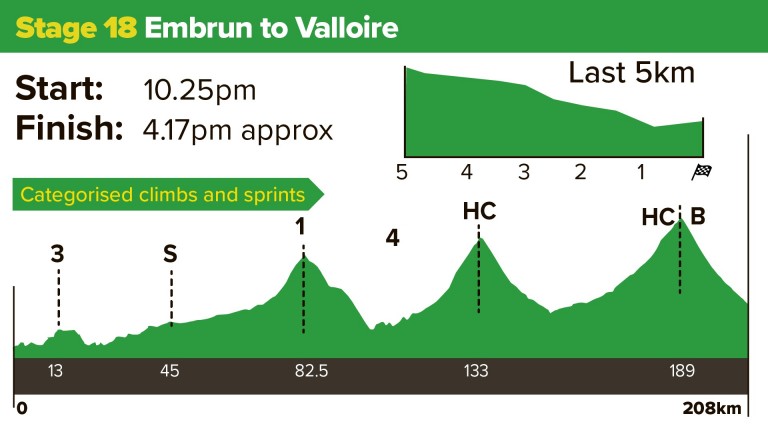 It has been the most gripping Tour de France in many years and on Thursday the 2019 edition reaches its climactic phase as the riders tackle the first of three stages in the Alps that will decide the champion or perhaps even turn Sunday’s traditional procession into Paris into an actual bike race.

The general classification has usually taken clear shape by this stage of the Tour but this year has been different, and there are seven riders with a bona fide chance of taking the final yellow jersey.

Between now and Saturday evening the candidates will do battle over 464km and seven enormous climbs that are either first or hors category. They will have to endure immense mental and physical pain, risk life and limb on high-speed descents, and hope the rigours of this unique three-week challenge do not take too heavy a toll.

They were at least allowed a second successive relatively easy ride yesterday as a big group went clear, led home by 12-1 chance Matteo Trentin, leaving the main men to come home at their leisure.

But there will be no respite from now on. Today’s 18th stage, a 208km beast, goes uphill from the start and after the fairly tame early ascent they then have to tackle the legendary cols of Vars, Izoard and Galibier before hurtling downhill for 19km to the finish at Valloire.

Things get no easier in the following two days, with the relief of shorter routes offset by mountain-top finishes. It promises to be utterly absorbing and with France holding two great chances of their first Tour triumph in 34 years, pretty much the whole country will be tuning in for the stage finishes.

Before looking at who might take the honours in stage 18, let’s assess the big guns’ chances of winning the Tour.

Julian Alaphilippe leader
He has ridden miraculously to reach the Alps in yellow but by losing the wheels of his rivals in the last of the Pyrenean stages he gave the impression that his fairytale bid to win the Tour will evaporate on the giant slopes he has to conquer between here and Paris. But he has had three days to recover and it would be dangerous to assume he is certain to wilt.

Geraint Thomas 2nd at 1:35
He is the defending champion and has been there and done it over three weeks of combat. Having been dropped twice in the first set of mountain tests, though, he has to prove his form before he can be regarded as the likely victor.

Steven Kruijswijk 3rd at 1:47
The Dutchman has dug in and kept tabs on his rivals when the gradient has risen in a way that suggests he has the stamina for the podium but perhaps not the killer instinct for the top spot. But he has good support from his team and it might just be that this race will be decided by the last man standing rather than the most combative.

Thibaut Pinot 4th at 1:50
The Frenchman is favourite after showing the most formidable form in the Pyrenees and, whereas most of his rivals seem content to try to win by not falling off the back of the lead group, he has shown a desire to further his prospects by kicking clear of that group. He will be keeping a close eye on the weather, as he hates it too hot but is also susceptible to losing time by having to descend on wet roads, which he also dislikes.

Egan Bernal 5th at 2:02
At 22 he might be too young to improve from fifth place to first, but he rode strongly last weekend and will relish the chance to give it a go if Ineos decide he, rather than Thomas, is their chief weapon. These long Alpine climbs should be his ideal terrain and he can certainly win.

Emanuel Buchmann 6th at 2:14
The progressive German has ghosted into the picture by failing to put a foot wrong without ever looking like he is about to explode and ride away from his rivals. But he has shown excellent form at high-altitude this year and will take some shrugging off.

Mikel Landa 7th at 4:54
He may be considered too far back to challenge but this mountain maverick is more capable than most of his rivals of producing a rabbit from the hat and shaking up the standings, and he will relish the chance to do just that in the coming days.

I would offer up a top three of Pinot, Bernal and Kruijswijk at this stage but it is beautifully unpredictable and all cycling fans should be happy to sit back and watch the final episodes unfold.

Pinot gets the vote for Thursday's stage. A break could go clear in which case Simon Yates, who has had the luxury of being able to take things easy in between selecting the stages to target, will need serious consideration.

But with time bonuses available at the top of the final climb it is hard to see Pinot wanting to keep his rivals company all the way to the finish and he might even decide to ignite the race on the Izoard.

Having lost 1:40 when crosswinds snapped the peloton last week he has been the strongest rider this year and can close the gap with another display of power.

FIRST PUBLISHED 7:07PM, JUL 24 2019
Between now and Saturday evening the candidates will do battle over 464km and seven enormous climbs