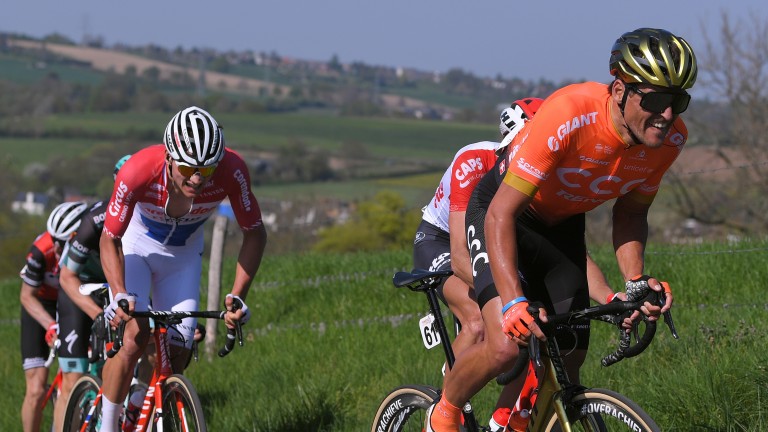 Dylan Groenewegen claimed his first stage win of this year’s Tour de France on Friday as he got the better of Australian Caleb Ewan in a sprint finish into Chalon-sur-Saone.

Predictably, the longest day of this year’s race was a rather sedate affair until the final kilometres when the sprinter’s teams took charge on the run-in to the line and there is no change at the top of the general classification.

All the yellow-jersey contenders finished alongside Groenewegen as Italian climber Giulio Ciccone retained the Maillot Jaune for at least another day.

After a rare day on the flat, the peloton return to the rolling terrain that characterises this year’s route.

There are no huge ascents on the 200km stage from Macon to Saint-Etienne but seven categorised climbs, including a quintent of category-two tests, add up to nearly 3,800m of climbing making for an extremely energy-sapping day out.

It looks a stage suited to the Classics specialists and Olympic champion Greg van Avermaet is a likely player should he be in the shake-up towards the finish.

A winner of four stages of the Tour de France in his career – two individually and two in team time-trials – Van Avermaet has a  punchy climbing style that will be suited to the up-and-down nature of the stage.

The Belgian has been in the mix on the two hilly stages of the Tour so far, finishing fourth on stage three and fifth on stage five, and has plenty of options at his disposal depending on how the stage pans out.

He can stay with the other one-day specialists in the peloton and launch a late solo attack late or he could even decide to get in the breakaway as he did when winning a medium-mountain stage at the 2016 Tour that put him in the yellow jersey.

At over 14 minutes down on GC he is likely to be given some rope by the overall contenders should he go up the road.

Bora-Hansgrohe’s Max Schachmann is another who could challenge for the stage win.

The newly-crowned German champion is nearly 17 minutes adrift of race leader Ciccone which makes him an extremely dangerous proposition for fellow stage hunters.

A stage winner at last year’s Giro, Schachmann had a fine Spring Classics campaign with third place at the prestigious Liege-Bastogne-Liege and fifth at both Amstel Gold and La Fleche Wallonne.

You need to be a high-quality climber to compete in those races and Saturday's parcour looks right up his street.

FIRST PUBLISHED 6:36PM, JUL 12 2019
He can stay with the other one-day specialists in the peloton and launch a late solo attack late or he could even decide to get in the breakaway