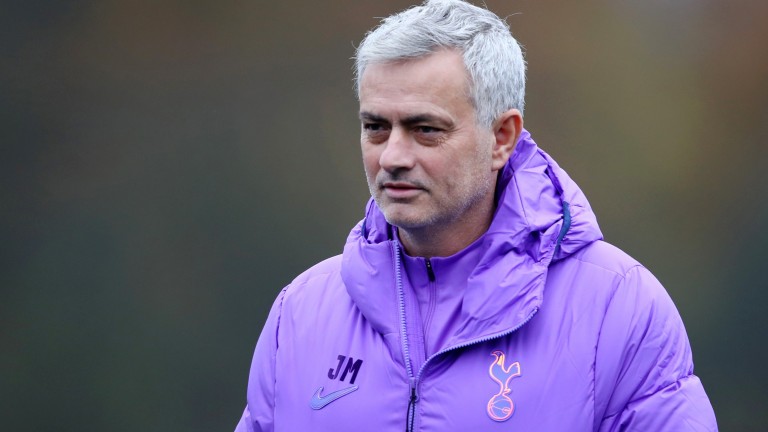 Jose Mourinho can lead Tottenham Hotspur to victory against Olympiakos in the Champions League
Julian Finney
1 of 1
By Dan Childs UPDATED 5:37PM, NOV 25 2019

Jose Mourinho is off to a flying start as Tottenham manager and can secure a victory over Olympiakos to take them through to the Champions League last 16 with a game to spare.

The Portuguese has a lot more work to do to get Spurs into a satisfactory Premier League position but his charges are handily placed in Champions League Group B with seven points from four games, which is six more than fourth-placed Olympiakos have.

Mourinho took Spurs back to basics with his team selection at West Ham on Saturday and it worked a treat for the majority of the game.

Tottenham's defence were protected by the midfield shield of Eric Dier and Harry Winks and they looked a threat on the counter-attack with the pace of Heung-Min Son and Lucas Moura.

Mourinho's tactics look ideally suited to playing on the road but they may not be as effective in home matches against teams prepared to sit back and defend.

In those matches the onus will be on Spurs to set the tempo and they may need to use the creative talent of Christian Eriksen and Giovani Lo Celso, who were left out of Mourinho's first starting line-up.

Olympiakos need a victory to stay in contention for a top-two finish but they are unlikely to exhibit a win-at-all-costs mentality.

Europa League knockout-stage qualification looks a more realistic objective and they will be hoping for a favour from Bayern Munich, who take on third-placed Red Star Belgrade in the Serbian capital.

Anything they take from the Tottenham Hotspur Stadium would be a bonus and their tactics are likely to be similar to their cautious approach to their matchday four fixture away to Bayern, which ended in a 2-0 defeat.

They defended diligently in Bavaria but were undone by goals from Robert Lewandowski and Ivan Perisic in the 69th and 89th minutes.

It was a fair outcome after Bayern had won the shot count 27-3 but Olympiakos were in the game until the final moments and their dogged performance should be a warning to Tottenham not to expect an easy night.

Olympiakos came from 2-0 down to draw 2-2 against Spurs in Athens on matchday one with right-sided forward Daniel Podence sparking the comeback with a fine counter-attacking goal.

Podence's pace will have to be respected and Spurs need to keep a close eye on 35-year-old attacking midfielder Mathieu Valbuena, who has been capped 52 times by France and still has an eye for a killer pass.

Mourinho will be keen that Spurs look after the defensive duties better than in the final 20 minutes at West Ham after a 3-0 cruise turned into a 3-2 tight squeeze and he is sure to be targeting his first clean sheet.

There may be some changes if he holds a few players back for Saturday's Premier League clash at home to Bournemouth, but the structure of the side is unlikely to be much different.

Mourinho's first priority is always to win the game and supporters hoping for a swashbuckling performance may be disappointed.

They may have to be content with a low-scoring success and punters could profit by backing Tottenham to win in a game with under 4.5 goals.

Olympiakos's last 12 away games have all featured fewer than five goals.