Tottenham to bounce back from Liverpool heartbreaker 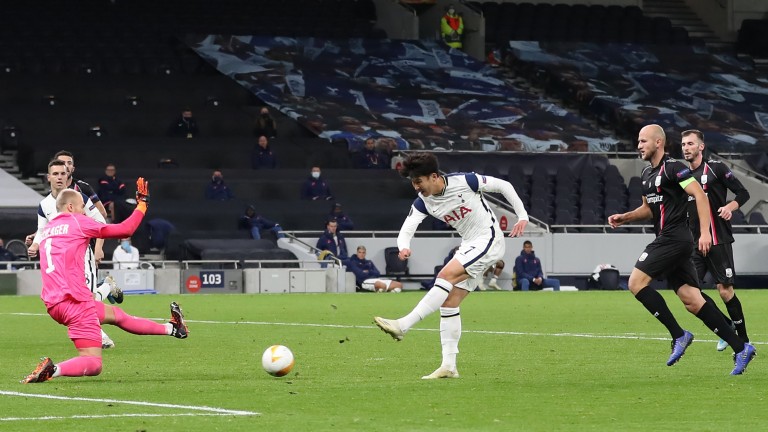 Heung-Min Son scores for Tottenham against LASK in the Europa League
Catherine Ivill
1 of 1
By Mark Langdon 4:43PM, DEC 19 2020

Leicester
Jonny Evans and Timothy Castagne return to the squad and Daniel Amartey could also be back. Caglar Soyuncu and Ricardo Pereira remain sidelined.

Tottenham were left gutted by their late 2-1 defeat at Liverpool on Wednesday but they can bounce back to winning ways with a home win over Leicester.

Spurs boss Jose Mourinho may have been as wayward as Steven Bergwijn's shooting when he declared that "the best team lost" at Anfield given Liverpool forced 11 attempts on target. It is true, though, that Tottenham achieved greater expected-goal figures and passed up a number of opportunities before Roberto Firmino's last-gasp header for the Reds.

Not all purists enjoy the way Mourinho goes about achieving results, but Tottenham's players have fully bought into the process – for now, at least – and the Liverpool loss was their first since the opening weekend.

Tottenham have hit Manchester United for six, beaten Manchester City to nil and gone to Stamford Bridge and gained a battling point.

They have also topped their Europa League group and are in the EFL Cup quarter-finals so it is easy to see why the players are prepared to do whatever is required of them when the results are impressive.

Slick counter-attacking has been the trademark with Heung-Min Son often linking up with Harry Kane, who loves facing his former club and averages a goal every 60 minutes against Leicester, where he had an unhappy loan spell early in his career.

Leicester were caught on the break last term, losing 3-0, and the Foxes can throw in some stinkers in a campaign where consistency has been difficult to find for many teams.

To borrow the Spurs Amazon documentary title it has been all or nothing for City, who are without a draw this term.

They have been good enough to thump Manchester City 5-2 but Brendan Rodgers' side have lost three of their last five, including a disappointing display when going down 2-0 at home to Everton on Wednesday.

Scoring seven spot-kicks has given them an unusual advantageous leg-up in the Premier League and the fear for Rodgers will be that Mourinho totally shuts down the space for his creative players to supply the ammunition for Jamie Vardy in open play.

Vardy, with 18 goals in his last 18 away games, usually needs space to be at his best and Tottenham have been able to plug those gaps throughout the campaign.

Rodgers also has a shocking record against Mourinho – two draws and five losses in seven games – and quite often falls into the traps set by his Portuguese rival.

Perhaps Rodgers is too determined to enforce his style on a man who showed him a path to the top when they were at Chelsea together.