Dortmund could be value, but expect late action 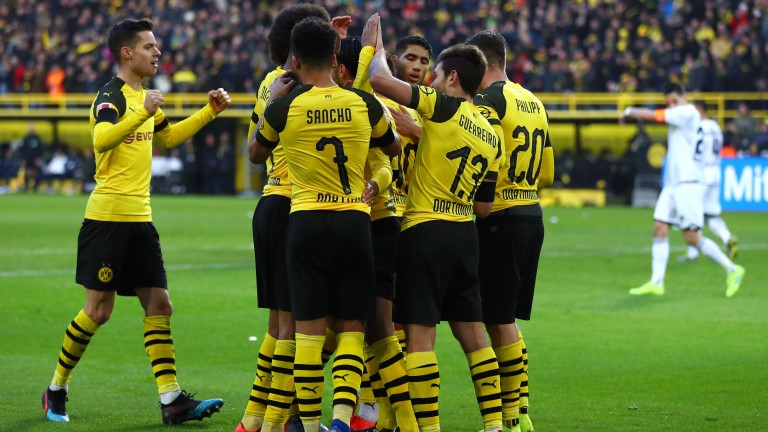 Spurs and Borussia Dortmund kick off a triple whammy of Anglo-German crackers in the last 16 of the Champions League and the Bundesliga leaders look as though they can stand their ground at Wembley.

December’s draw threw up three showdowns between England and German big guns with Liverpool and Bayern Munich and Manchester City and Schalke crossing swords next week.

While bookmakers and punters have few doubts City will take care of Schalke, the tasks facing Tottenham and Liverpool look far more daunting with Dortmund 4-5 shots to see off Mauricio Pochettino’s men and make the last eight.

Had Pochettino been able to go into battle with Harry Kane and Dele Alli available those odds would have been different.

Tottenham have definitely stuttered over recent weeks without their 20-goal top scorer and his right-hand man, and even though Dortmund must also make do without their skipper, Marco Reus, the visitors have headed for London at the perfect time.

Pochettino isn’t best pleased at having this huge fixture just three days after his team were given a proper work-over by Leicester in the league. They won that match 3-1 but the visitors missed a penalty, had plenty of chances and it was Tottenham’s spirit as much as anything else which got them through a tricky match.

And that’s nothing new. Spurs have needed late interventions to sneak wins against Fulham, Watford and Newcastle in recent weeks and really are clinging on to the top two in the title race by their fingernails.

Even in the Champions League group stage time and again they were bailed out by late heroics, managing to turn a campaign which looked doomed at the halfway stage into a successful one.

They are allowing chances galore but are also able to find a way of scoring goals, with South Korea’s Heung-Min Son contributions worth their weight in gold. When this paper-thin squad needed someone to score the goals that the injured Kane wasn’t going to, Son has stepped up with ten in his last 11 outings.

As for Dortmund, they’ve had an extra 24 hours to prepare for this game – they drew 3-3 with Hoffenheim on Saturday – although the manner in which they threw away a three-goal lead might be more perturbing.

It means their lead is now down to five points but they continue to impress.

Keeper Roman Burki has been rock-solid in goal where he boasts the third best minutes-per-goal ratio of all German cats. Axel Witsel is proving invaluable shielding a defence which will stay organised and disciplined while waiting to launch the Yellow-Blacks’ famed attacking stars on the counter.

Even minus Reus, Dortmund are well served by young aces like Christian Pulisic and Jadon Sancho, kids who will pose a huge threat to Tottenham’s not-always-convincing rearguard.

Dortmund, who pipped Atletico Madrid for top spot in qualifying for the knockout phase, have scored in each of their last 13 matches and at least twice in nine of those.

There is an obvious temptation to back goals in a tie between two attack-minded outfits – their four European matches over the past couple of campaigns have produced 13 goals.

However, the magnitude of the occasion may dictate that both show a desire to stay in the tie for the full 180.

A late goal, however, still looks more likely than not. All six of Tottenham’s group games and five of Dortmund’s produced goals after the 80th minute of matches.

Key stat
Dortmund have kept one clean sheet in their last ten matches.