Tottenham back into second spot after easy win at Cardiff 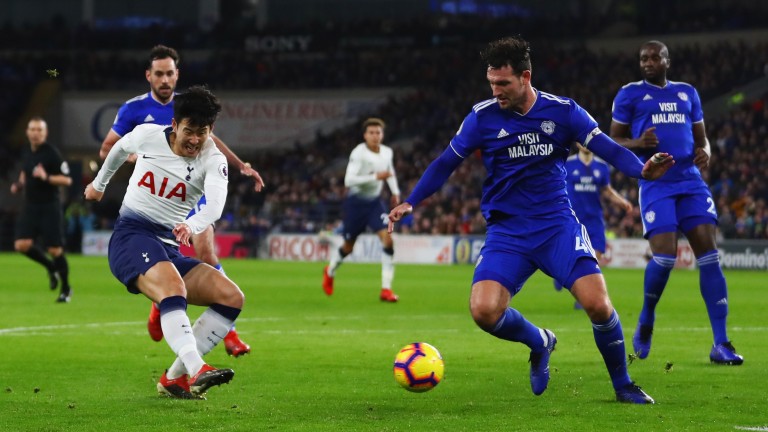 Tottenham narrowed the gap to Premier League leaders Liverpool to six points with a 3-0 victory at Cardiff.

Spurs, who lost 3-1 to Wolves last Saturday, bounced back emphatically at the Cardiff City Stadium with goals from Harry Kane, Christian Eriksen and Heung-Min Son.

The win moved the Londoners back above Manchester City into second spot and they are 22-1 with Betfair and Paddy Power to win the title.

Arsenal are 7-2 to land a top-four finish following their 4-1 win over Fulham at the Emirates. The Gunners are two points behind Chelsea in fifth spot and six clear of Manchester United in sixth.

Everton lost ground on the top six after they were beaten 1-0 at home to Leicester. Jamie Vardy scored for the Foxes who eased the pressure even further on boss Claude Puel.

Puel remains favourite to be the next top-flight manager to leave his post after a run of just one win from eight games through November and December. But after picking up three wins from their last four games - including victories over Chelsea and Manchester City - the Frenchman has been eased to 2-1 with Sky Bet to be the next gaffer to go.

Huddersfield chief David Wagner is next best at 5-1 along with Burnley boss Sean Dyche.

Leeds remain favourites to win the Sky Bet Championship despite their thrilling 4-2 defeat at Nottingham Forest.

The Whites overcame an early Forest goal and a red card to midfielder Kalvin Phillips to take a 2-1 second-half lead but Forest bagged the victory with goals from Jack Colback, Daryl Murphy and Ben Osborn.

Leeds are 13-8 with bet365 and Betway to finish as champions ahead of 9-2 shots Norwich, who could only draw 1-1 at Brentford.