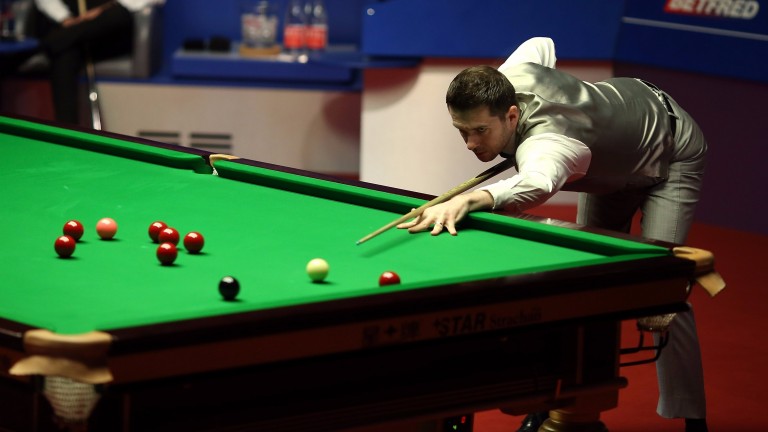 Humphries’s top tip
Mark Selby 13-2
Mark Selby has tightened his grip on the world number one position with some dominant performances in the first half of the season and the Leicester ace looks capable of adding a second Betway UK Championship triumph to his title roster.

Selby was superb in winning his second Betfred World Championship crown in Sheffield in May and he showed that his dictatorial powers on the baize haven’t diminished when whipping Ding Junhui 10-1 in the final of the International Championship in China at the end of last month.

The Jester is second favourite to rule the roost in York over the coming 13 days and that could be a decent investment with John Higgins, recent winner of the China Championship and Champion of Champions, and Mark Allen, who occupy the same fourth quarter as Selby, on course for a huge last-16 rumble.

After a slow start to the campaign, Kyren Wilson returned to somewhere near his best with a run to the semi-finals of the Coral Northern Ireland Open last week. The Kettering cueman could be a title threat in the 128-player line-up at the Barbican Centre, but one swallow doesn’t make a summer and punters may want to see more from Wilson before receiving confirmation that he is back.

Of the others in the fourth quarter, Anthony McGill and Ben Woollaston, are methodical performers who have the talent to triumph in the second most important ranking event in the sport.

McGill, in particular, excels in longer matches, so the best-of-11-frames format that lasts up to the final could be welcomed by the 80-1 Scot, who won his first important title at the Indian Open in July.

Next best
Stuart Bingham 28-1
Some observers are still not convinced about Stuart Bingham’s chances of staying in the top echelon in the wake of his world title triumph last year.

But the seasoned Essex potter showed his class when finding only Higgins too good in the China Championship earlier this month and Bingham could be keen to claim a second major title and prove a point.

He’s good enough to win in York, although his good buddy Shaun Murphy, who could also be a major player in the third quarter, may feel it’s his turn to win one after losing to Bingham in last year’s Crucible final and in the Guangzhou semi-finals earlier this month.

Of the other seeds in the third quarter, Barry Hawkins will do well to last the pace in York having been pipped by Mark King in a thrilling final in Belfast on Sunday, while the still-improving Liang Wenbo may do well to go one better than he did in York last year having already captured a sizeable title in the Coral English Open last month.

Stephen Maguire, who has started the season well, could be a handful as he attempts to regain a top-16 ranking, while talented Chinese youngsters Zhou Yuelong and Yan Bingtao could worry Liang in early outings.

Other notables
Defending champion Neil Robertson is the top seed but while the Australian cannot be ruled out, he hasn’t shone as brightly as expected in recent months so could be one to take on at the available prices.

Ronnie O’Sullivan, in the same first quarter as Robertson, is the title favourite and he certainly stepped up his level in the Champion of Champions, suggesting he could be a big danger in York.

Shanghai Masters hero Ding Junhui has already shown enough this season to be on the short-list in his hunt for a third UK trophy, while there have been signs that Judd Trump, winner of this tournament five years ago, may not be far from his best.

Day-one matches
Oliver Lines could have enough potential to oust Martin O’Donnell but The MoD has posted some decent wins this season and that probably explains why bookmakers are struggling to find a favourite.

Zhou Yuelong can be considered at 8-11 conceding a start of 1.5 frames to Duane Jones, but the Welshman looks a promising sort who it may be wise not to underrate.

Rory McLeod has been struggling to find the form that saw him lift the Ruhr Open trophy last season and the Wellingborough-based
45-year-old could be a vulnerable favourite against Jak Jones, another useful performer from south Wales.