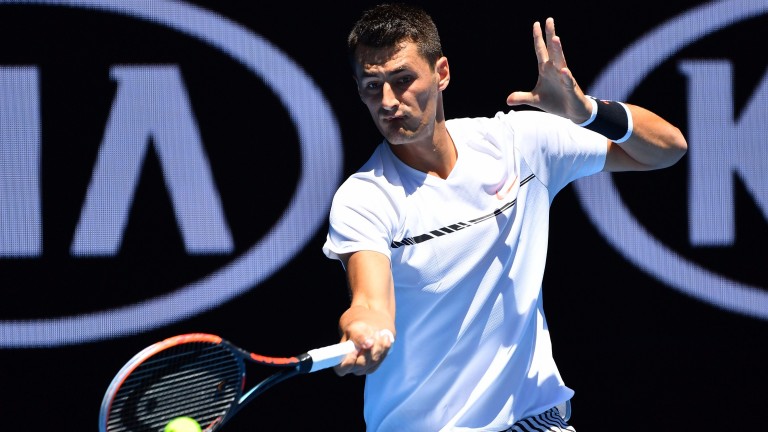 Bernard Tomic had not looked to be at his peak going into the first Grand Slam of the season, but there was little wrong with his 6-2 6-1 6-4 dismissal of Thomaz Bellucci in the first round at Melbourne Park.

Victor Estrella Burgos has the next crack at downing the Queenslander, but while the journeyman from the Dominican Republic has had some joy in his previous two outings against Tomic, things could be tougher for the veteran in their third date.

Estrella Burgos has won three of the five sets the pair have contested, but two of those three were on clay. This time the pair are clashing on a hard court in Tomic’s homeland – and the Gold Coast maverick looks sharp.

Tomic hasn’t always won sets by wide margins – he used to be comfortable about winning them in tiebreaks – so backing him to post a quick victory may be wiser than supporting him on total-games handicaps.

Lacko v Sela
Lukas Lacko has had a problem with self-belief, but it may be worth chancing that the Slovak is making strides in that area.

Lacko has bundles of natural ability but until now he has been one of the worst serial under­achievers on the ATP Tour.
His results in qualifying, however, were excellent and a reproduction of the form that took him to victories over Maximo Gonzalez and Denis Kudla would give him a big chance of thwarting Dudi Sela.

The problem is, Lacko has seldom played two matches alike in the main draw of a Slam, so punters are unlikely to want to risk high stakes on a performer who is often frustrating to follow.

Sela fought back from the loss of the opening set to beat Marcel Granollers 5-7 6-3 6-2 6-0 and that’s a fine result on paper, but if Lacko produces the quality he is capable of the experienced market leader could struggle.

Barthel v Puig
Monica Puig is still basking in the glory of her extraordinary Olympic singles gold triumph last summer, but the Puerto Rican may receive a tough test from Mona Barthel in their last-16 rumble.

Puig is going the right way and looks sure to win more decent titles in her career, but she is prone to inconsistency and form lapses and Barthel, who saw off a brave effort from 16-year-old Aussie Destanee Aiava 6-3 7-6 in her opener, could be worth siding with again now the German is starting to rediscover her touch.

Barthel looked as if she might do some serious damage in Grand Slams a couple of seasons ago, but it didn’t happen for her at the time. It’s way too early to give up on such a competent performer, though, and Barthel can be backed to win at least a set against Puig, who dropped just one game in her opener.