Title contenders unlikely to slip up at lowly Lokeren 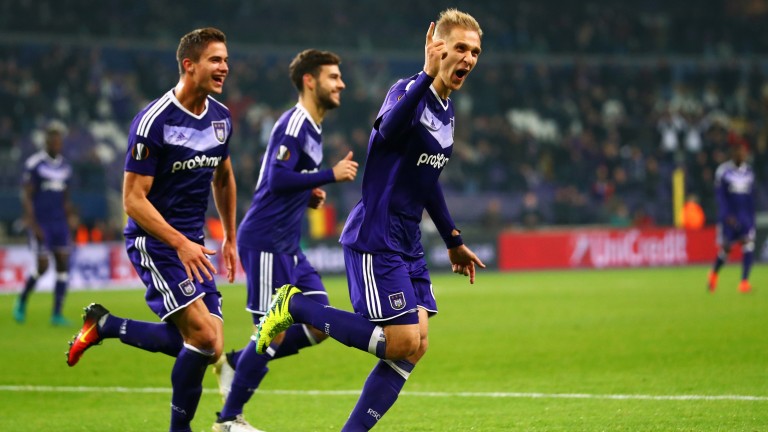 Anderlecht celebrate a Lukasz Teodorczyk goal against Mainz in the Europa League
Getty Images
1 of 1
By Dan Childs 3:47PM, FEB 3 2017

Anderlecht’s title push was dented by a 0-0 draw at home to Standard Liege on Sunday but they can respond by beating lowly Lokeren at the Daknamstadion.

Before last weekend’s setback Anderlecht had won five Jupiler League games in succession and were piling the pressure on leaders Club Brugge.

The Brussels giants will go top of the table for at least two days if they avoid defeat at Lokeren but head coach Rene Weiler will only be focused on collecting maximum points.

Anderlecht are the top scorers in the division and Polish striker Lukasz Teodorczyk, who is on a season-long loan from Dynamo Kiev, has been their main attacking weapon, scoring 17 goals in 23 appearances.

However, he benefits from playing in a very offensive side and gets excellent service from 19-year-old creative midfielder Youri Tielemans, who is attracting reported interest from some of Europe’s top clubs.

Anderlecht have a couple of Europa League last-32 fixtures against Zenit St Petersburg to look forward to later this month but they seem to be fully focused on domestic matters for the time being.

They should possess too much quality for Lokeren, who are winless in five and need to improve if they are to avoid being sucked into a relegation struggle.

Lokeren are the second-lowest scorers in the division and have netted just ten times in 11 home league games.

They have drawn each of their last three home fixtures but are sure to be wary of Anderlecht, who Lokeren haven’t defeated in their last seven league meetings.