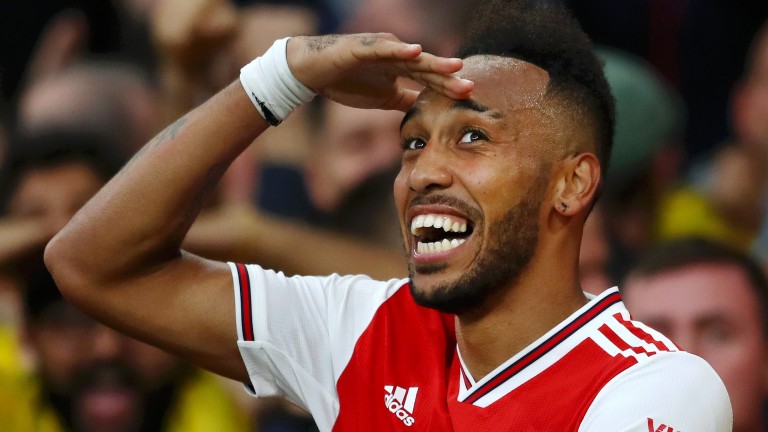 Arsenal's flakiness on the road came back to bite them again at Sheffield United on Monday but it’s not often they put a foot wrong at the Emirates.

The Gunners have won 16 of their 20 home games in 2019 and should oblige at long odds-on once more against Vitoria Guimaraes.
While the Portuguese visitors have lost both of their group games, Arsenal have sauntered to a 3-0 success at Frankfurt and won 4-0 at home to Standard Liege.

Those 20 games at the Emirates this year have average 3.25 goals per game, so backing a home win in a match containing at least three goals looks a value bet.

Arsenal have scored at least twice in five of their six home games this season.

Celtic
Olivier Ntcham is unavailable but could be back this weekend. Tom Rogic has returned to training and Ryan Christie is available after a domestic ban.

Lazio
Stefan Radu, Adam Marusic and Luis Alberto have not trained this week.

Lazio were always going to be the glamour game for Celtic in this season's Europa League group stage and the excitement generated by the visit of the Serie A side can rouse the Parkhead masses enough to help them secure a draw.

Bookmakers are struggling to find a favourite and it's a match which looks tough to call, particularly as Lazio are not expected to give this contest their full attention due to a busy calendar ahead.

A fully-focused Lazio may well have had enough to secure victory over the Bhoys, but a draw will do them quite nicely and it would also be of use to the hosts, who lead Group E by one point.

Lazio's main aim for the season is to finish in the top four in Serie A and qualify for the Champions League, however, Simone Inzaghi's side are down in seventh and were fortunate to escape with a 3-3 draw against Atalanta on Saturday following a thrilling comeback.

They take on Fiorentina, Torino and Milan before the Celtic reverse fixture, so top goalscorer Ciro Immobile is tipped for a spot on the bench among a raft of reported likely changes.

Only Inter have stopped Lazio from scoring this season, although Immobile accounts for most of their firepower.

He scored two penalties against Atalanta and also bagged a double in the 2-2 draw with Bologna and notched the winner against Rennes on matchday two of the Europa League.

Immobile did not feature on matchday one as the Romans lost 2-1 at Cluj and Inzaghi's domestic priorities may help to explain a dodgy away record in Europe.

Lazio have lost seven of their last nine Europa League road encounters, including four of the last five in the group phase.

That will catch Celtic's attention and it will be interesting to see who else Inzaghi decides to rest.

Luis Alberto is tipped for a place on the bench and it would be a big gamble should Serbian midfield powerhouse Sergej Milinkovic-Savic be among the subs.

Neil Lennon has promised his Celtic side will up the tempo and they will no doubt look to test goalkeeper Thomas Strakosha, who is likely to be forced into starting despite an elbow complaint with reserve stopper Sylvio Proto already sidelined.

This is a step up in class from what Celtic are used to domestically, but they have won six on the spin at Parkhead and can use home advantage to obtain a positive result.

Lazio have lost seven of their last nine Europa League away games.

Willy Boly's late winner at Besiktas could prove to be a key moment of Wolves’ Europa League campaign and Wanderers can build on that victory in Bratislava.

That success ensured Wolves head into their two games with Slovan Bratislava only one point behind the top two.

Slovan have an enviable home record in the Europa League, winning their last seven games, but a ban means the crowd for this game will be 21,000 children, which should make the trip less fearsome for Wolves.

Wanderers boss Nuno has fielded strong sides in Europe and that strategy could pay dividends again in Slovakia.

Wolves have scored in eight of their last ten Premier League and European outings.

The situation in Group G could not be tighter with all four teams locked on three points after two rounds of fixtures.

Porto are the bookies’ favourites to top the section and the Dragons can justify that stance with a home victory over Rangers.

The Portuguese club were sunk at the Tub by Feyenoord three weeks ago but they are much more solid at home, where they have won ten of their last 12 competitive games.

Liverpool and Krasnodar are the only sides to beat them in that run and Rangers may lack the necessary quality to trouble them.

Porto have won their last five home games by a combined 12-1 scoreline.

Manchester United are yet to win on the road this season and an intimidating trip to Belgrade doesn’t immediately spring out as an ideal opportunity to address their away-day woes.

United, who start a run of four games away from Old Trafford at Partizan, have scored just two goals and kept only one clean sheet in five games on the road.

Ole Gunnar Solskjaer has a number of injuries to contend with, especially at the back, and going for goals looks the best strategy.

Partizan have scored in each of their last 12 home games in the Europa League and should continue that trend.

Manchester United have kept one clean sheet in 13 away games in all competitions.