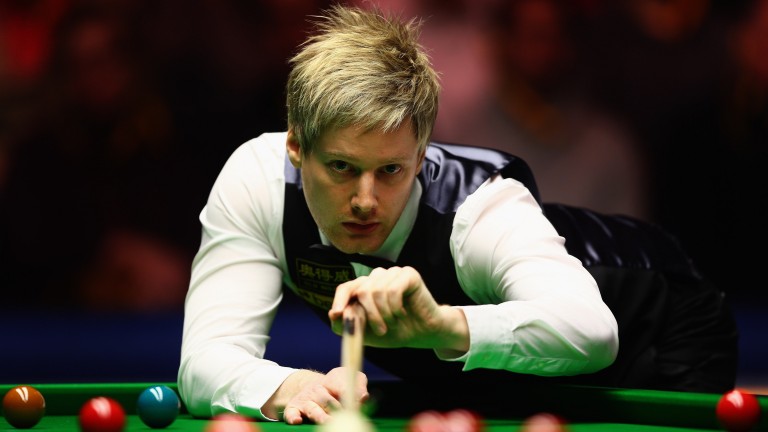 The hectic schedule for the boys on the baize continues this week at the Ricoh Arena in Coventry, the next big-money stop for the fourth staging of the Champion of Champions tournament.

A prize fund of £300,000 has enticed a healthy field for this invitational, with only Marco Fu declining his invitation and Joe Perry taking his place.

Last week’s China Championship winner John Higgins is another late entry having secured his place with that big money success in Guangzhou, and he slots into Group Four setting up a mouthwatering clash with the in-form Shaun Murphy.

The format is a straight knockout with the added twist that the quarters are referred to as groups and players face their opening matches and quarter-finals on the same day.

Market leader and two-times winner Ronnie O’Sullivan kicks off the action this afternoon against Robin Hull and has without doubt landed in the softest group.

Fireworks are expected early on from the Rocket, who should ease through Group Three, but his recent form isn’t good enough to overcome the more challenging opposition thereafter and he is reluctantly passed over.

World number seven Neil Robertson has had a quiet season, but interestingly the Australian pinpointed this tournament and next month’s UK Championship as starting blocks for his season last year and secured both.

Robertson landed the Riga Masters and has gone deep in a number of other tournaments in recent months, but he certainly hasn’t hit top gear yet and may be looking to mirror last season’s exploits.

He is fancied to overcome the much-travelled Stuart Bingham, who was still playing in China on Saturday, in his opener, before facing the winner of Ali Carter and Ding Junhui – two players he has healthy records against on big occasions.

Double-figure quotes about the defending champion and 2010 Crucible king look a tad generous for a tournament in which the standard is expected to be excellent with a barrage of high breaks on show.

No firm had priced up the chance of a maximum break being compiled yesterday evening, but should they do so before the action commences this afternoon, punters should be clambering to get on as playing conditions are likely to be favourable.