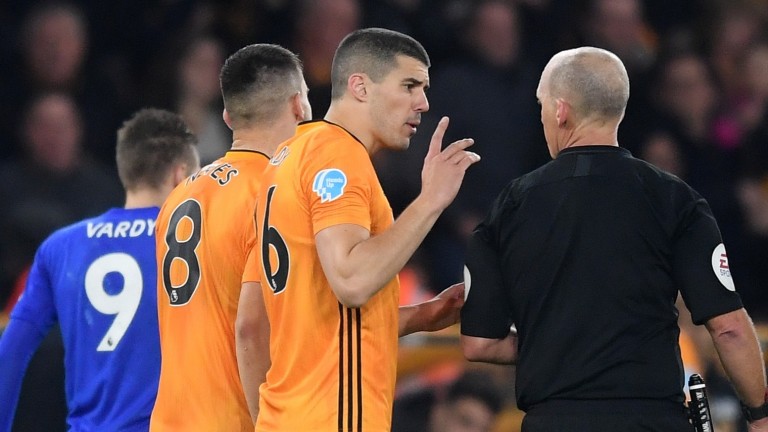 I stopped watching Wolves v Leicester before half-time. VAR disallowed a Wolves goal for offside. I thought the decision was so ridiculous that I did not want to carry on watching.

It was perhaps the worst example of something that has happened too often in the Premier League this season – a player being punished for a supposed offence they did not mean, of which they were unaware, and from which they did not gain an advantage.

Premier League spin doctors will say VAR correctly applied the letter of the law and had no choice but to do what they did. This argument does not stand up.

Premier League officials do not apply all of the laws. They ignore one part of the new handball rule and two parts of the VAR protocol on offside, for instance. Presumably they have been told to.

VAR disallowed two other Wolves goals this season when according to the rule on handball the goals should have stood. One was in an FA Cup third-round replay away to Manchester United, the other was on the opening weekend of the season in the Premier League game away to Leicester.

So officials do not apply all of the rules all of the time. Nor should they. I just think it is unfortunate that the rules they have ignored are rules I think would make the game better.

The idea can be extended to other things. And sometimes it is.

Judges, I am told, try not to make stupid decisions. (Some do make stupid decisions, but they do it without realising). Judges know the law and apply it most of the time, but not when applying it would require them to deliver a verdict that is preposterous. Instead they come up with a form of words that allows them to do what seems fair.

And there is something else that judges do. Others who work with rules do it as well. They ask: was the rule meant to cover this situation?

Was the offside rule meant to disallow this sort of goal? Surely not.

One of the purposes of the rules of football is to say there are some things a player could do to try to gain an advantage that they should not be allowed to do. If a player does something from which they could not gain an advantage, should they be penalised? Surely not. This is a point that rarely comes up in discussions. I think it is the heart of the matter.

The ball is played along the ground to a player who scores then VAR disallows the goal because the player’s eyebrow was offside. Could the player have gained an advantage from their eyebrow being in an offside position? No. The goal should stand.

If you are doing something and get the feeling it is wrong, stop. Straight away. Have the Premier League powers-that-be got the feeling that what they told VAR to do is wrong? Presumably not.

I turned off my television during Wolves v Leicester. I will zap the remote again when I feel VAR has ruined a game. I am not making a protest. I have paid my subscriptions and I do not watch commercials during breaks, so nobody is going to lose out on any of my money. It is just that I no longer want to watch a game that has been spoiled for me by VAR decisions that I think are bad and unnecessary.

I am not the only one appalled by many VAR decisions. Will the Premier League scrap VAR? Not any time soon – that much seems clear. Will they make meaningful changes? They might, but they might not. The reason is cognitive dissonance.

If someone insists they are right, and then they are confronted by evidence suggesting they are wrong, they can react by insisting even more strongly that they are right.

Leon Festinger was a psychologist who coined the phrase 'cognitive dissonance'. He studied a cult in Michigan, USA. Dorothy Martin, the cult leader, said the world would end on December 21, 1954. Aliens would land a spaceship in her garden, whisk her and fellow believers to safety, then flood the earth.

When it did not happen cult members did not become disillusioned. Why? A spaceship had not landed, the earth had not been flooded. Cult members convinced themselves that their faith in the warning had moved the aliens to spare not only them but all humans. This was easier than going home and admitting to their wives and husbands that they had been idiots.

When someone is sure they are right and evidence suggests they are wrong they experience dissonance. They can remove that dissonance by getting around the evidence. They are most likely to do this when they have staked a lot of credibility on being right.