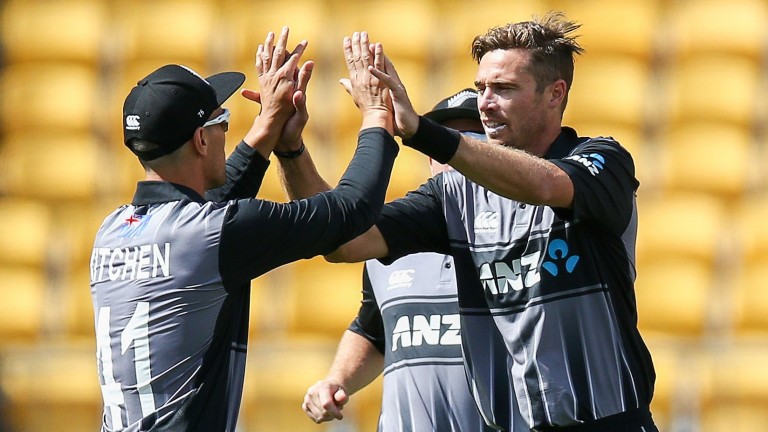 Tim Southee celebrates one of his three wickets in the win over Pakistan in Wellington
Hagen Hopkins
1 of 1
By James Milton 7:00PM, FEB 11 2018

After two disappointing defeats to Australia in the Trans-Tasman Tri-Series, England need a victory over New Zealand in Wellington to bolster their chances of gaining another crack at the Aussies in the final of the competition.

Bookmakers are struggling to split the teams but a repeat of England’s only previous Twenty20 game at the Westpac Stadium would do nicely as they thrashed the Black Caps by ten wickets in February 2013.

Hales and his fellow batsmen were unable to cut loose against Australia’s bowlers in Hobart and Melbourne and even Jos Buttler, deputising for injured skipper Eoin Morgan at the MCG, struggled to time the ball in his innings of 46 off 49 deliveries.

Morgan’s groin strain means he is a doubt for the start of the New Zealand leg of the Tri-Series and England will need to bat with more fluency at a venue where the Kiwis racked up 196-5 against Pakistan in 2016.

Colin Munro and Martin Guptill form a dangerous opening pair and David Willey, who took two wickets in the first over in Hobart and struck with his fourth ball in Melbourne, will be desperate to break that partnership early.

However, New Zealand also pose a significant threat with the new ball, as Pakistan discovered in last month’s T20 fixture at Wellington.

Despite resting ace left-armer Trent Boult, New Zealand had their opponents on the ropes at 22-4 inside the six Powerplay overs and Tim Southee ended up with figures of 3-13.

Southee, who demolished England’s batting unit with 7-33 at the Westpac Stadium in the 2015 World Cup, has taken nine wickets in his last four home T20 internationals and can get over a performance line of 26.5.

England’s Dawid Malan is set to continue at number three and looks overpriced to top-score.

The Middlesex left-hander was brilliantly run out for ten at the MCG but he scored 78 against South Africa and 50 against Australia in his two previous Twenty20 outings for England.