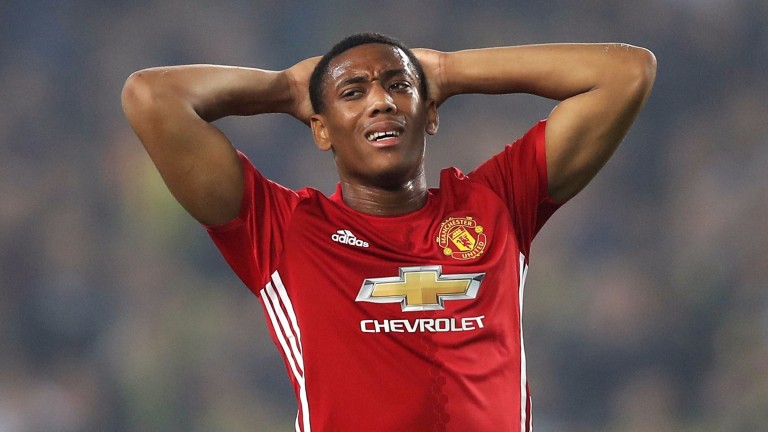 Manchester United have scored just one goal on their Europa League travels this season and a low-scoring outcome looks likely when they take on Group A basement-boys Zorya Luhansk in Ukraine tonight.

United’s nine points have been secured at Old Trafford but they need at least a point this evening to guarantee staying in the competition.

A defeat – available at 11-1 – would spell the end of the Red Devils’ European campaign if Feyenoord are victorious at home to Fenerbahce. And finishing outside the top two would be a huge blow to United, who are 11-2 favourites to win the trophy.

The Europa League was not supposed to be a high priority for Jose Mourinho but its importance has increased due to United’s poor form in the Premier League.

Their 1-1 draw at Everton on Saturday left them nine points off fourth place and they are out to 16-5 for a top-four finish.

Hopes of playing in next season’s Champions League are becoming increasingly dependent on winning this competition and Mourinho signalled his intent to by taking a full squad to Ukraine.

Ideally he would prefer to have left star men such as Paul Pogba and Zlatan Ibrahimovic at home with the aim of being better prepared for Sunday’s league match at home to Tottenham, but he has left nothing to chance and will demand a better performance than he got in defeats at Feyenoord (1-0) and Fenerbahce (2-1).

Anything approaching a competent United performance should be enough to avoid defeat against Zorya but it seems unlikely that Mourinho’s men will finish with a flourish.

Zorya have shown themselves to be a well-organised side conceding just six goals in their five Europa League matches.

They are certain to finish bottom but are unlikely to lack motivation for a fixture they would regard as one of the biggest in their history.

Zorya were not overawed when losing 1-0 away to United on matchday two but they lacked a goal threat and their main outlets were on-loan Shakhtar Donetsk wingers Ivan Petriak and Oleksandr Karavaev, who are both Ukraine internationals.

Petriak and Karavaev may cause United a few problems but Zorya lack a credible goal threat and their usual first-choice centre-forward, Vladyslav Kulach (another Shakhtar loanee), has notched just twice this season.

Zorya have netted just twice in the Europa League and rely heavily on defence so would consider a draw against United to be a favourable result.

United would much rather win (they are warm 4-11 favourites) than hang on for the point but neither side requires maximum points and the sensible strategy is to back under 2.5 goals – an outcome which has occurred in all of Zorya’s Europa League matches this term.