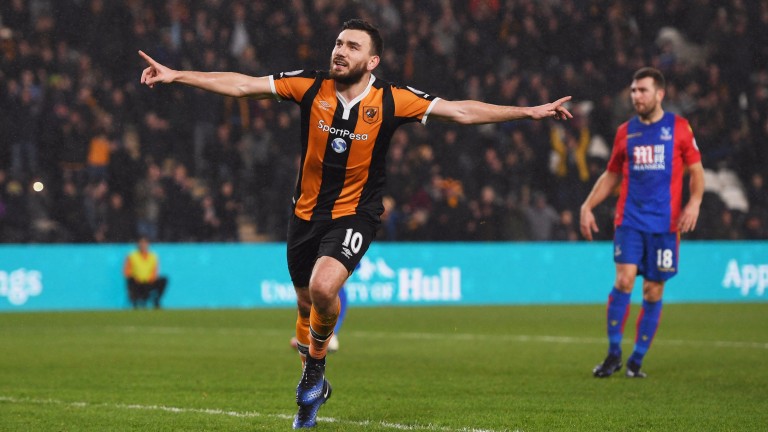 Even the worst teams in the Premier League will pick up a few decent results during the season and rock-bottom Hull can prove that point with a positive result against Everton at the Kcom Stadium.

The inconsistent Toffees have suffered defeats immediately after their last three league triumphs and at the prices don't jump out as great value to follow up Monday's 2-0 win at Leicester.

Everton's victory over the champions was a boost to Ronald Koeman and a tactical triumph after he switched to a three-man defence but Leicester were nowhere near full-strength with Jamie Vardy, Robert Huth and Christian Fuchs suspended.

It snapped a run of disappointing road results for Everton, who had collected one point from a possible 18 away from Goodison Park and they remain heavily reliant on Romelu Lukaku to score goals.

Lukaku has notched ten times in the Premier League - the next best is right-back Seamus Coleman on three - and if Hull's back line can deal with the Belgian that would go a long way to the hosts obtaining a positive result.

Hull will probably go down and deserve to be favourites for last spot after earning six points from their last 16 matches.

However, Mike Phelan's side have shown plenty of character in recent outings.

They hit the woodwork three times before losing 1-0 to a harsh penalty at West Ham and battled well for 70 minutes in Monday's defeat against Manchester City.

Yaya Toure's penalty opened the floodgates in the 3-0 win but there was plenty to admire about Hull's effort with centre-backs Michael Dawson and Curtis Davies leading the defensive effort.

Hull's home record of five defeats in nine matches is slightly misleading too with four of those losses coming to top-six teams Chelsea, City, Arsenal and Manchester United.

The Tigers have beaten Southampton and Leicester, drawn with Crystal Palace and West Brom and only the 2-0 reverse against Stoke was a below-par result at the Kcom.

Phelan's side can be set up well to defend with a five-man defence and the likes of Tom Huddlestone and Jake Livermore sitting in front, although a lack of goals must be addressed in the January transfer window.

However, Robert Snodgrass has at least bagged five times and his quality in the final third can test the Toffees.

Snodgrass' goals are a bonus with his creativity the strongest part of his game and Hull could pose a serious threat from set-pieces, just as they did on Monday when Bacary Sagna was forced to clear Dawson's header off the line at 0-0.

The ball hasn't been running for Phelan's side lately but their luck could turn.

Team news
Hull
Abel Hernandez remains sidelined, while Moses Odubajo, Will Keane, Greg Luer and Brian Lenihan are out. Allan McGregor and Alex Bruce are close to a return to first-team action.

Key stat
Hull have lost one of their last five matches