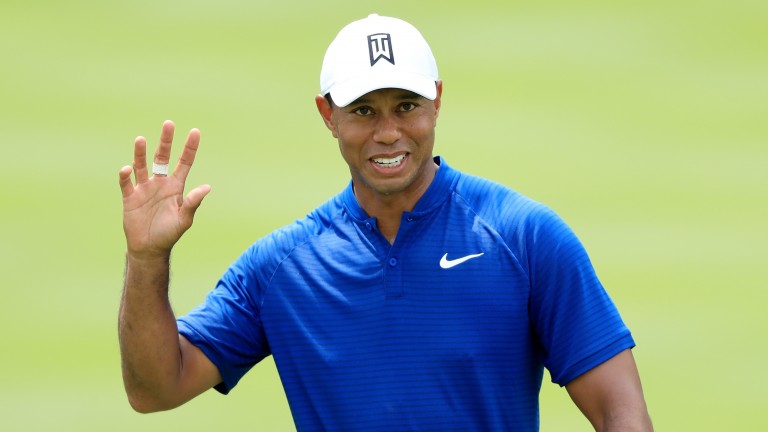 Tiger Woods can finally get his hands on another trophy
Getty Images
1 of 1
By Steve Palmer UPDATED 4:19PM, SEP 19 2018

Bryson DeChambeau, Justin Rose, Tony Finau, Dustin Johnson and Justin Thomas fill the first five places in the FedEx Cup standings with one event remaining – victory for any of them in the season-ending Tour Championship will bring the FedEx Cup crown too.

The other 25 Tour Championship runners must rely on the rest of the leaderboard shaping up in their favour if they are to pocket the overall prize and the accompanying $10m bonus cheque. Only DeChambeau, Rose, Finau, Johnson and Thomas can fully control their FedEx destiny.

Rose, who became world number one after back-to-back runner-up finishes in the previous two playoff events, is contesting Tour Championship market leadership with Johnson and Rory McIlroy. Paddy Power are betting on the FedEx Cup, making DeChambeau and Rose 5-2 co-favourites. Johnson is 5-1, Finau is 6-1 and Thomas is 8-1.

Palmer's top tip
Tiger Woods 12-1
An increasingly confident Tiger Woods is 100-1 with Paddy Power to win the FedEx Cup from 20th place in the standings and the greatest player of his generation will not have given up hope of claiming the lucrative title for a third time.

Bill Haas completed the Tour Championship and FedEx Cup double in 2011, having started his East Lake campaign 25th in the points list, so Woods, the 2007 and 2009 FedEx champ, still has a sniff.

Woods, focused on winning the Tour Championship and ending a victory drought stretching back to the 2013 Bridgestone Invitational, can be fancied to hold up his side of the bargain. Since returning in December from his latest and most successful back surgery, Woods has slowly but surely re-established himself as one of the best players in the world, and his comeback season can end in the best possible fashion.

It is debatable whether anyone has hit their irons with more authority than Woods over the last three months. Fourth place in the Quicken Loans National preceded sixth spot in the Open, where he led with eight holes to play and would have shared runner-up honours had he not missed a tiny birdie putt at the 72nd hole after his winning chance had gone.

That bold Carnoustie effort was followed by even greater fireworks in the following Major – a vintage iron-play performance delivering a final-round 64 for second place in the US PGA – and the old Tiger was showing his teeth at the age of 42.

Sixth place in the BMW Championship last time out provided further evidence that Woods is well and truly back in business, even becoming a force with a driver in his hand. He put a new shaft into his chief at the start of the playoffs – a model he used in his pomp – and it immediately straightened up his driving.

The 14-times Major champion has made driving accuracy improvements at the perfect time to boss proceedings at East Lake, where his record is excellent. He was runner-up three times before winning by an emphatic eight shots in 2007. That astonishing 23-under-par effort is six shots superior to what anyone else has posted over 72 holes at this tight, tough track.

Woods finished runner-up in his next East Lake start in 2009, making only two appearances since and none since 2013, so he will be relishing his return to a more than suitable Donald Ross track. His BMW Championship exploits – on another Ross creation – were particularly encouraging. He finished second for strokes gained from tee to green and second for strokes gained on approach.

The BMW was his most convincing driving performance of the year. He found 13 of 14 fairways in round four, hitting it long and straight all week, and he churned out 16 of 18 greens in regulation in both rounds one and three. The king of golf carded nothing worse than a bogey all week.

Despite a bright start to the year, putting has become the main issue, with a couple of flat-stick switches. His old Scotty Cameron was employed to devastating effect in round one of the BMW, before misbehaving on the Friday. It will surely not be long before Woods delivers a consistent four-day putting performance – it is a club which is traditionally a magic wand in his hands – and East Lake is more of a ball-striking examination anyway.

The week off between the final two playoff events will have done Woods more good than anyone in the Tour Championship field. He has not been used to such a hectic schedule in recent years. The hiatus has afforded him time to go to the gym and get his body in perfect condition for the FedEx denouement.

Hot and sunny weather, with firm and fast turf, is perfect for the modern Tiger to showcase his skills. He is a seven-time US Tour champion in Georgia, including four Masters, and he can finally get back to winning ways in Atlanta. This megabucks gathering holds no fears for the richest player in the field.

Next best
Billy Horschel 28-1
Another former FedEx Cup champion could lay down the biggest challenge to Woods. Billy Horschel carded four rounds in the 60s to win the Tour Championship by three shots in 2014, scooping the FedEx Cup in the process.

Horschel finished seventh in his only other East Lake appearance in 2013, so this is his first visit to the track since he dominated four years ago. Given some hugely encouraging golf in the last couple of months, a repeat success is well within the compass of this greens-in-regulation machine.

Horschel was second in the Barbasol Championship at the end of July, 11th in the Wyndham Championship on another Ross design, third in the Northern Trust, the opening FedEx Cup playoff event, and third last time out in the BMW. A withdrawal from the Dell Technologies Championship with a sinus infection is nothing to worry about – he was fully fit and firing in the BMW – and his putting stroke is looking much better.

Other selection
Webb Simpson 28-1
East Lake is also a great fit for Webb Simpson, who showed with a runaway victory at Sawgrass in May what he can do on a tight, tough, water-strewn layout.

He also has an exceptional Wyndham record (Ross design) and has been in magnificent form this year. Sixth place in the BMW after a pair of weekend 65s has set up Simpson for a Tour Championship title tilt. He has posted two top-five finishes from five visits.

Others to note
Justin Rose
The Englishman has suffered back-to-back near-misses in the last two playoff events, and has twice finished second in the Tour Championship. Another bridesmaids role could be coming.

Xander Schauffele
The defending champion bounced back to form with third place in the BMW Championship and must be respected. He was edged by Tony Finau for the final Ryder Cup wildcard berth.

Patrick Cantlay
The former world number one amateur has the right sort of game for East Lake and has been in solid form all year.

Francesco Molinari
The Open champion finally gets a crack at a course which suits him greatly and he warmed up with eighth place in the BMW. A debutant to be respected.

Justin Thomas
The reigning FedEx Cup champion has failed to find top gear in his last two outings and may be about to surrender his silverware.

Dustin Johnson
The giant Carolinian has had a troubling September, losing his world-number-one status and suffering a well documented relationship crisis with his fiancee. He is unattractive at a short price on a course he has never mastered.

When to bet By 4.40pm Thursday

Where to watch Live on Sky Sports from 6.30pm Thursday

Time difference Georgia is five hours behind the UK and Ireland

Course overview East Lake is the curtain-closer to the US Tour season, with the most successful performers of the year ending their Stateside campaign in the Tour Championship.

It is extremely long for a par-70. The nines were switched last year, the front becoming the back and vice versa. That meant the tournament no longer ended on a 235-yard par-three, but instead a 600-yard par-five. The 14th and 15th holes – a 544-yard par-four followed by a par-three over water – has become a difficult stretch with the finishing line looming.

This is a demanding, heavily undulating venue where no better than 13 under par has been reached in the last ten years. A SubAir drainage system means firm, fast greens are almost certain.

The story of last year Xander Schauffele bravely emerged victorious by a shot, becoming the first rookie to win the season finale, with runner-up Justin Thomas claiming the FedEx Cup.

Weather forecast Sunny and hot, with hardly any chance of rain, and precious little breeze.

Type of player suited to challenge The fairways are notoriously difficult to hit at East Lake, so accurate drivers should prosper. There are only two par-fives and no easy birdies, so players who like to grind out plenty of pars can flourish.