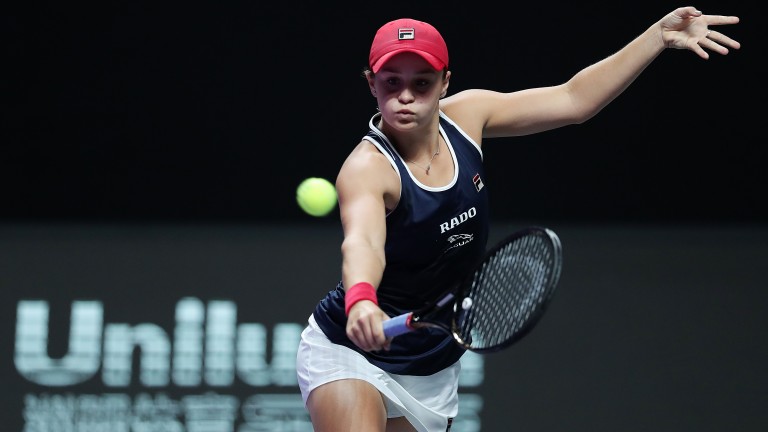 Ash Barty takes on Petra Kvitova with a semi-final spot at the WTA Finals on the line
Lintao Zhang
1 of 1
By Joe Champion 5:38PM, OCT 30 2019

Ashleigh Barty and Petra Kvitova are still in the hunt for a place in the last four of the WTA Finals and that should ensure their Red Group clash is as competitive as the bulk of their previous meetings.

World number one Barty has faced the Czech five times over the last three seasons and all but one match - in the 2019 Australian Open quarter-finals - has gone to three sets.

They meet again before Belinda Bencic takes on Kiki Bertens, knowing that the winner will advance to the semis in what is effectively a quarter-final match.

Barty is a narrow favourite but Kvitova is always dangerous and will take the game to the Australian, for all that the court speeds aren't as quick as the Czech player might normally like.

Bertens, meanwhile, went into the tournament as an alternate following Naomi Osaka's withdrawal and there were also injury complications in the Purple Group on Wednesday after Bianca Andreescu retired when a set down against Karolina Pliskova.

The Canadian, who beat Serena Williams to win the US Open last month, has a suspected torn meniscus and is unlikely to play her final round-robin match so Sofia Kenin is set to take her place to play Elina Svitolina on Friday.

Svitolina has already topped the group which sets up a winner-taker-all contest for second place between Pliskova and Wimbledon champion Simona Halep.

FIRST PUBLISHED 5:38PM, OCT 30 2019
Barty is a narrow favourite but Kvitova is always dangerous and will take the game to the Australian