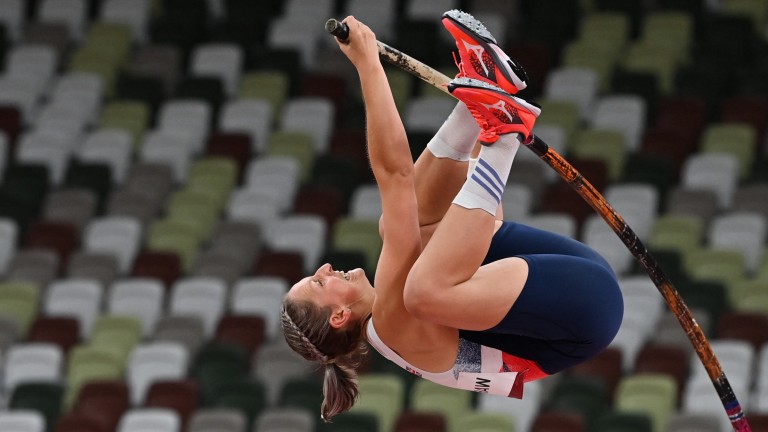 Holly Bradshaw is going for Britain's first medal of any colour in the women's pole vault
ANDREJ ISAKOVIC
1 of 1
By Racing Post Sport 5:33PM, AUG 4 2021

Three things to watch out for in the Tokyo 2020 Olympic Games on Thursday.

The women’s pole vault looks a wide-open contest with Holly Bradshaw one of only a handful of competitors to have shown any consistency. The Brit has performed well all year with only two women bettering her season-best height of 4.90m

Britain’s track cycling supremacy is being sorely tested in Tokyo but they have a genuine chance at a first gold medal of these Games in the form of Matthew Walls in the men’s omnium.

The Oldham rider picked up bronze in the multi-discipline event at the World Championships at the start of 2020 before securing gold at the European level later in the year.

The 23-year-old’s steady improvement and ability in the all-important points race gives hope he can challenge two-time world champion and strong favourite Benjamin Thomas of France.

Thomas was dominant in Berlin last year when claiming the rainbow jersey but the chasing pack looks strong, in particular Walls and 14-1 chance Campbell Stewart of New Zealand, who won the world title in 2019.

The medals will be handed out in the men’s hockey with Australia the favourites to pick up gold. The Kookaburras brushed aside Germany in the semi-finals to set up a showdown with reigning world champions Belgium.

The Belgians saw off India in the last four to reach a second consecutive Olympic final having lost to Argentina in Rio four years ago.

Australia are ranked the number one side in the world but lost the last two meetings with Belgium at the start of 2020.

Steven Gardiner is odds-on for 400m gold after a highly impressive year to date. Barring a DNF in May, the Bahamian is unbeaten in 2021, picking up from where he left off in 2020 after a superb victory at the World Championships.

Gardiner ran a 44.14 in the 400m semi-finals, easily seeing off one of his main rivals, Michael Norman of the USA, in the process. He has the potential to go faster too having run a personnel best 43.48 in Doha.

London 2012 champion Kirani James is Gardiner’s biggest threat but is likely to have to settle for silver if this race goes to form.