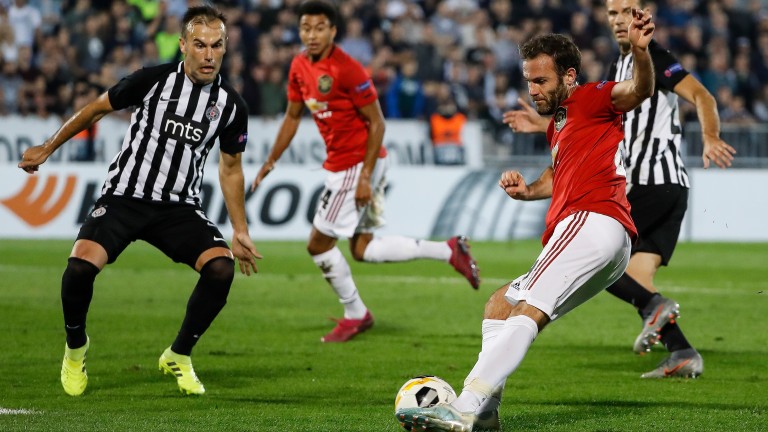 Partizan Belgrade
The Serbian side have no injury worries.

Twelve of Manchester United’s last 15 matches have produced two or fewer goals and only one has produced more than three – and this match is likely to be every bit as dreary as many of those that have gone before.

United are top of their group despite scoring only one goal from open play – their winner in Belgrade two weeks ago was courtesy of an Anthony Martial penalty.

Partizan have lost four of their last seven games in all competitions and despite producing some tidy enough football they looked limited against a well-shuffled United pack in Serbia.

Ole Gunnar Solskjaer is likely to draft in the club's youngsters once more and this promises to be another tepid affair.

Rangers are suddenly looking like a threat in all competitions having made a decent start to their Group G campaign as well as keeping pace with Celtic in the Ladbrokes Premiership.

Good enough to draw 1-1 at the Dragao two weeks ago, the Gers are seriously impressive at Ibrox where they have won 15 of their last 16 in all competitions.

They are up against a Porto side who were dumped out of the Champions League by Krasnodar, have lost at Feyenoord and head to Glasgow after a couple of tame domestic efforts against Maritimo and Aves.

Sergio Conceicao’s men aren’t the force they once were and they are missing the goal threat of Mali frontman Moussa Marega.

Rangers have won 15 of their last 16 home matches.

Wolves
Diogo Jota is suspended and Willy Boly is injured. Morgan Gibbs-White is a major doubt but Matt Doherty has recovered from a knee problem.

All three of Wolves’ Group K encounters have been tight and this one should be no different.

The Old Gold are in a strong position after nicking a 2-1 win in Bratislava but there was little to choose between the sides.

Since then the Slovakians have kept on winning domestically and they are bang in touch in this competition with four points. The draw came at Braga, a match in which Jan Kozak’s men twice came from behind to share the spoils.

Most of Wolves’ matches, domestically and further afield, are tight and this promises to be the same.

Nuno Espirito Santo will have an eye on Sunday’s Premier League showdown with Villa and is without Diogo Jota.

Wolves have won just two of their last 17 matches by more than one goal.