Three things to look out for in this weekend's football 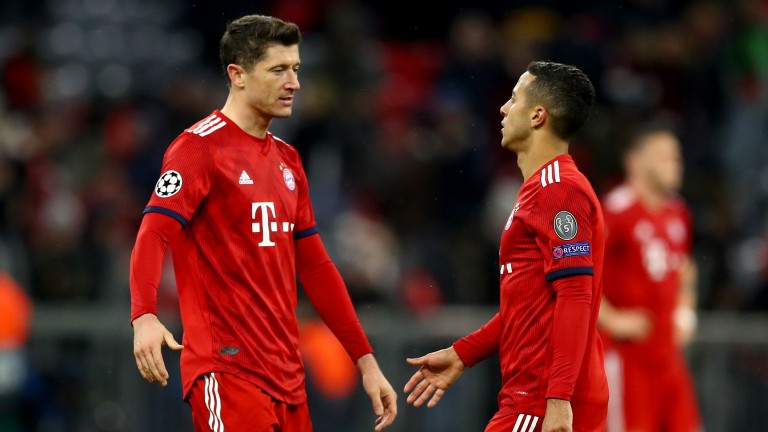 1 Bundesliga battle is coming to a head

Bayern Munich and Borussia Dortmund meet for the 100th time in the Bundesliga and this Klassiker has a lot more riding on it than most.

For the first time in seven seasons Bayern find themselves off the top after the 27th round of matches and they need a victory to leapfrog Dortmund going into the last six fixtures.

It should be a belter and, if previous duels are anything to go by, full of goals. Their last four league meetings have produced 20. Bayern, who have won seven league home games in a row, are short enough at 8-15 though not as skinny as over 2.5 goals which is a 4-9 chance.

Frontmen Robert Lewandowski and Paco Alcacer are in the hottest of form with the Pole needing one more goal to match Gerd Muller’s Klassiker record of 14.

Alcacer scored the late winner when Dortmund beat Bayern 3-2 in November, one of eight times in the league this season that the super-sub has copped for last-scorer backers.

What's the biggest game in England this weekend? Romantics would say either FA Cup semi-final – bookmakers, however, will tell you Everton against Arsenal on Super Sunday.

Okay, it’s not even that super but as a Betfair spokesman explained: “A decent Premier League game will far outstrip an FA Cup tie in terms of turnover”. The magic of the cup, eh?

Arsenal, locked in a captivating four-way tussle for two Champions League berths, have won four in a row against the Toffees, scoring 15 goals in those successes. Everton have lost seven of the last eight meetings of these top-flight mainstays.

3 Hopes of more Wild progress at the Latics

Thierry Henry and Paul Scholes now have something else in common beyond loads of international caps, Premier League winners’ medals and shifts in the TV studio.

They also boast the less distinguished honour of having made their first forays into club management this season, bombed spectacularly, and been replaced by the men they squeezed out in the first place.

Henry crashed and burned at Monaco while Scholes’ misery was endured at Oldham in Sky Bet League Two, with just one win in seven before he was replaced by Pete Wild, who he had taken over from in February.

Wild looks a man to follow. His two stints at the helm at Boundary Park this season have yielded a 60 per cent win rate – the highlight being an FA Cup win at Fulham – with a profit of 12.5 points to level stakes.

The Latics, who have won twice in a week since Wild’s second coming, are 5-2 at Colchester where they are unbeaten on their last four visits.