Thomas and Johnson likely to apply pressure to McIlroy over weekend 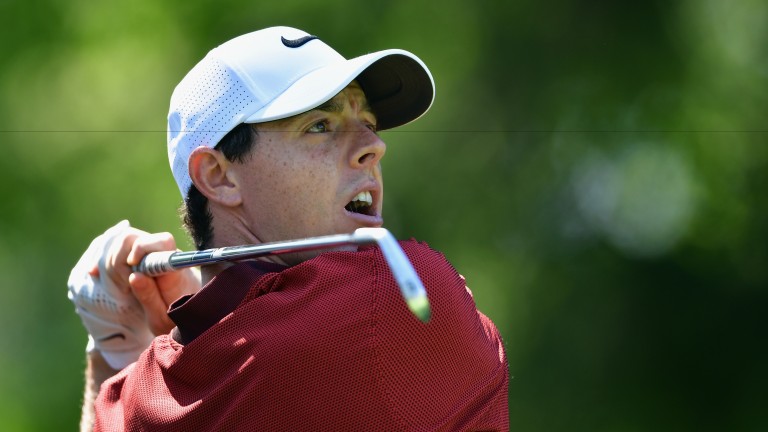 Rory McIlroy has made a sterling comeback from injury in the WGC-Mexico Championship, but some putting issues over his closing holes of round two left the Northern Irishman glum heading to the Club de Golf Chapultepec clubhouse.

McIlroy, sidelined for six weeks with a rib stress fracture, has reached nine under par through 36 holes on his return to competition. The pre-tournament 12-1 chance has forged a two-shot lead and assumed favouritism going into the weekend.

McIlroy's performance has been even more impressive given he was ailing with a stomach problem throughout day one and was unable to eat any food before his round. A Thursday 68 was followed by a Friday 65, and no bigger than 13-8 is available about the former world number one claiming WGC glory on Sunday.

There has been a wonderful tempo about McIlroy's swing in Mexico – slightly slower than normal – which bodes extremely well for the season ahead. The cooling of the putter in his final three holes of round two, though, will have his fans worrying about a potential weekend of woe on the greens.

McIlroy, who has hit 29 of 36 greens in regulation and is driving superbly, has surprised himself by overcoming rust so quickly. “Coming here this week, I definitely would have taken a top-ten. It would have been a great start to come back, but I'm in a great position and can think about trying to win this thing.”

Phil Mickelson, Ross Fisher and Justin Thomas are tied for second place. Mickelson's caddie, Jim Mackay, withdrew during round two with a stomach virus. Mickelson's brother, Tim, took over. Fisher has been enjoying himself with a new putter he put in the bag for the first time on Monday and he leads the putting stats, something the Englishman hardly ever achieves.

The biggest danger to McIlroy, though, is Thomas, who won back-to-back Hawaii titles at the start of the year and closed with two birdies in round two at Chapultepec. After a quiet few weeks on the greens, Thomas is putting better this week – there is more pace and purpose to his stroke – and it would be a surprise if he did not seriously contend on Sunday.

Third-round threeball punters are pointed towards world number one Dustin Johnson, who is swinging with huge amounts of confidence. Johnson would be clear at the top of the leaderboard but for enduring a nightmare on the greens in round one, a succession of short putts narrowly missing the hole.

Johnson can be expected to take care of JB Holmes and Roberto Castro in the 5.48pm UK and Ireland time threeball, moving into a Sunday shootout with McIlroy, Thomas and others.