Things should get better for the slow-starting sides 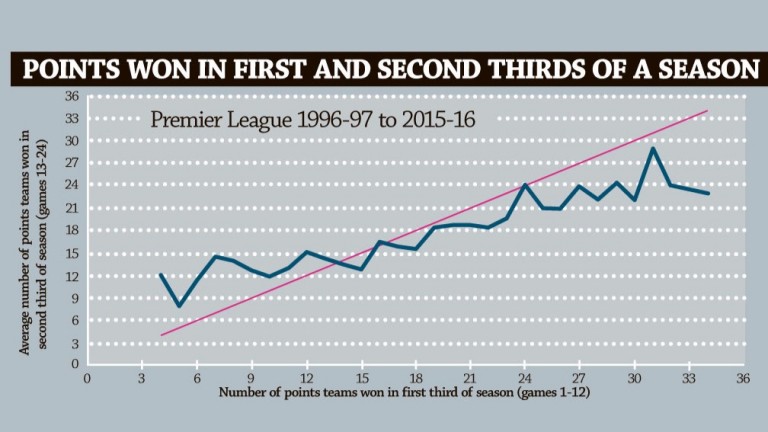 We don’t know the half of it. What we have seen in the Premier League tells us only half of what we would need to know to forecast accurately what will happen next.

By the time we go to our beds tonight all Premier League teams will have played 12 games. A Premier League season can be divided into three sets of 12 games (with two left over at the end, which we will ignore).

The graph shows the relationship between the number of points won in the first and second thirds of a season. It was produced with data from the last 20 Premier League seasons, 1996-97 to 2015-16. Games one to 12 I called the first third, games 13 to 24 I called the second third.

As you will notice, there is a difference between the pink and blue lines.

Overall the best estimate of how many points a team would gain in the second third came from a calculation in which half the weight was given to the number of points they gained in the first third and half to the average for all teams.

If you look at the graph closely, however, you will see that that the blue line is further from the pink line near the bottom than near the top. Generally speaking, bad form is less likely to be reproduced than good form, which should console almost everyone.

The best estimate of how many points slow-starters would get in the next 12 games was a calculation in which one-third of the weight was given to the number of points they got in the first 12 games and two-thirds to the average for all teams.

For the rest it was the other way round. The best estimate of how many points fast-starters would get in the next 12 games was a calculation in which two-thirds of the weight was given to the number of points they got in the first 12 games and one-third to the average for all teams.

Most seasons in the Premier League there is little difference in ability between teams in the bottom half of the table. Differences in results over any number of games are largely accidental. Nearly every season some teams are relegated who are no worse than some teams who were not.

What distinguishes the victims from the survivors is mostly misfortune. Perhaps that is true not only of football.

Don’t get me wrong. I am not saying that you could make accurate predictions of what will happen in the next 12 games of this season for all teams using these equations. They are the ones that would have given the best predictions in the past, and for many teams they should still give reasonable predictions now.

However there may be teams with above-average points who have underperformed. Manchester United, perhaps.

And there may be teams with below average points who have overperformed. Burnley, perhaps – although if they win tonight they will have 17 points, which would put them above average.

Draw a broader conclusion. What we have seen tells us surprisingly little about what we will see.

History does not repeat

GK Chesterton expressed the last point in the story alongside beautifully in an article published more than 100 years ago in the Daily News.

“Every sum if worked out in the same way at any time will bring out the same answer. But it is the peculiarity and fascination of the sums of history that with the most perfect calculation the sum comes out with a slight mysterious difference every time.”

Betting profits and losses, I believe, accrue in that space Chesterton describes – the gap between what the past led us to expect and what we get. Those who make the best allowance for it win.