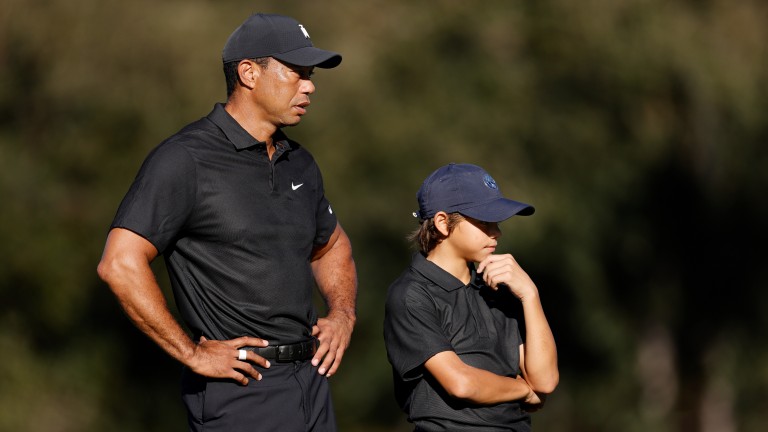 Tiger Woods made a heartwarming return to golf last weekend, partnering his 12-year-old son Charlie at the PNC Championship in Florida, which is effectively a 'bring your kid to work' day for Major champions.

Sporting dynasties are a source of endless fascination, as demonstrated by the viral split-screen clips highlighting the shared golfing mannerisms of Tiger and his cub: the twirling of the club, the picking up of the tee, the triumphant pump of the fist.

In the week that Christians around the world prepare to celebrate the birth of Jesus, perhaps it is timely to consider the experience of growing up in the shadow of an iconic parent.

Charlie Woods isn't the only son of a global sporting legend to have burst on to the scene this month. In fact, he's not even the only one named Charlie.

Savage is the son of footballer-turned-broadcaster Robbie Savage, who was co-commentating on the match for BT Sport when the fruit of his loins was introduced for a late cameo at Old Trafford.

Whatever your opinions about Savage senior – whether you find him annoying, vexing, exasperating or just plain tiresome – it was a moving moment.

American political enthusiasts have been engrossed in the century-long soap opera featuring the Kennedy clan and there is a similar tingle of excitement when sports fans recognise a familiar surname on the teamsheet.

Writer Martin Amis, son of Kingsley, claims that much of the media's animosity towards him is because he is "the only hereditary novelist in the canon" – as if having a prolific author as a father provided Mart with a kind of cheat code to produce his own bestsellers.

In sport, however, there are plenty of examples of offspring following in their parents' lucratively-sponsored footsteps and their successes or failures are magnified by their family backgrounds.

Those of us whose combined family achievements amount to a 25-metre swimming badge, Grade 3 on the descant recorder, and a couple of early-2000s ASBOs are understandably intrigued by these titans of genetics, work ethic and temperament, these tyros for whom nature versus nurture is a win-win situation.

We love to see the similarities between the old and the new, as in the case of Tiger and Charlie Woods's on-course idiosyncrasies.

But we are also conditioned by tech-capitalism to expect constant improvements on what has gone before: never-ending software updates, a new iPhone model every few months, 4G, 5G and 6G, faster connections, sharper pictures, and a version of Robbie Savage who, unlike the original, makes the step up from the Manchester United academy to the first team.

The intoxicating whiff of potential hangs over any youngster bearing a famous name and bookmakers tap into this, offering long-term specials when, say, one of Wayne Rooney or David Beckham's sons are enrolled in a Premier League academy.

I'm sure I've got a betting slip somewhere on Romeo Beckham to score a last-gasp free-kick against Greece that seals England's qualification for the World Cup finals. Think I got 12-1...

As with the Kennedys, the drama of sporting dynasties unfolds over decades. Can we pinpoint the exact moment when Frank Lampard junior eclipsed the footballing achievements of Frank Lampard senior?

England bowler Stuart Broad certainly enjoys the statistical quirk that his highest Test score, 169 against Pakistan in 2010, is seven runs more than the career-best effort of his father Chris, an opening batsman.

Naturally, it will be interesting to follow the progress of Charlie Woods and Charlie Savage. Will Woods become a top-class golfer? Will Savage live up to his bloodline by developing into a truly elite-level outspoken host of BBC Radio 5 Live's 606 phone-in?

But I have a soft spot for those children of sportspeople who stray from their pre-destined paths. Last week I discovered that Kai Widdrington, the professional dancer whose partner AJ Odudu (ankle) was ruled out of the Strictly Come Dancing final, is the son of former Southampton midfielder Tommy Widdrington.

Liam Botham, son of Ian, started out as a county cricketer, dismissing Mike Gatting on his Hampshire debut in 1996, before wisely carving out his own career in rugby union and rugby league. His son James is now a Welsh rugby union international.

One of Zinedine Zidane's kids, Luca, is a goalkeeper for La Liga club Rayo Vallecano although he was sent off 16 minutes into his debut against Sevilla in August - no, it wasn't for a headbutt.

In a similar vein, Sachin Tendulkar's scion Arjun is a left-arm fast-medium bowler who bats at number 11 for Mumbai in domestic Twenty20 cricket.

Despite self-identifying as a bowler, it can't be easy for young Arjun to come out to bat in India with the name Tendulkar on the back of his shirt and start backing away to square-leg, hoping to nick a couple of streaky boundaries to boost his career average of three.

I also have heard, anecdotally, about some incredibly rare examples of the progeny of famous families crashing through the glass ceiling to make it in the world of horse racing.

Clearly, whether you're founding a major monotheistic religion or taking over a dual-purpose training operation, being born in a stable isn't the worst start in life. Merry Christmas!

FIRST PUBLISHED 5:00PM, DEC 22 2021
We love to see the similarities between the old and the new, as in the case of Tiger and Charlie Woods's on-course idiosyncrasies