Why it's high time boxing binned the belts 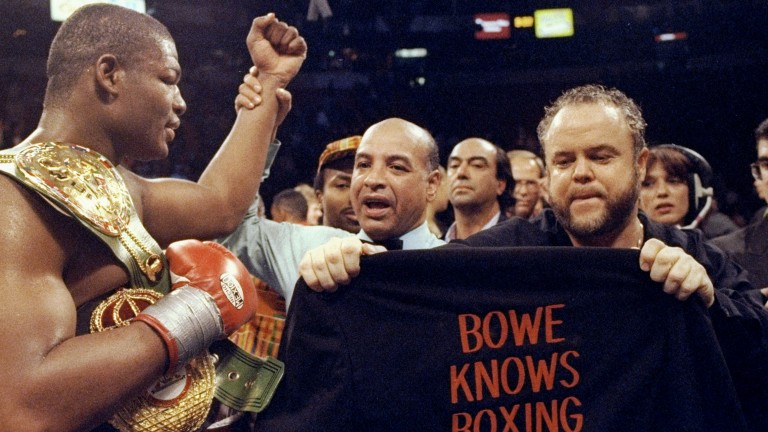 Less than a month after American heavyweight Riddick Bowe became the unified heavyweight champion of the world in 1992, he infamously binned his World Boxing Council belt in front of the world's press.

The New Yorker scored a unanimous decision over Evander Holyfield and then only weeks later the sanctioning body threatened to strip him of the title if he didn't make his first defence against Lennox Lewis.

Bowe's reaction was to drop the belt in the bin stating: "The WBC is wrong, and I will not be intimidated by them. I am the heavyweight champion of the world and today I withdraw my recognition of the WBC. I am stripping them!"

Although the American has since apologised, he may have been on to something looking at the current landscape of boxing.

Belts are predominantly in place as marketing tools for promoters and broadcasters to sell the importance of fights, but a worrying emergence of more and more titles in recent years now only confuses fight fans as well as diluting the merit of the achievement being classed as a 'world champion'.

There are now a ridiculous number of belts on offer, such as interim, gold, silver, regular, super and global, but the WBC took the craziness to another level with the inception of their 'franchise' belt two years ago.

Mexican superstar and four-weight world champion, Saul 'Canelo' Alvarez, who has yielded some of the biggest pay-per-view business in sport in recent years, was the first fighter to be crowned WBC 'franchise' champion in 2019 - which ultimately meant he was still regarded as the champion even if he lost.

As a WBC champion, he would have to pay them a percentage of his astronomical earnings for every fight they sanctioned.

Canelo has the hunger and drive to be the best and be regarded as the best, but in order to do so he must jump through unnecessary hoops.

The traditional barometer in boxing for success is to collect as many titles as possible and, in the event of collecting all four world championship belts (WBC, WBA, WBO and IBF), achieve 'undisputed' champion status in that weight class.

Different belts and different sanctioning bodies make that task very difficult with the ordering of mandatory challenges almost at will and the threat of losing belts should orders not be satisfied - just as the WBC did to Bowe when negotiations between him and Lewis broke down.

Canelo is taking on Britain's Billy Joe Saunders on May 8 in Texas to unify their super middleweight titles, but before he could do so he had to satisfy his mandatory obligations with the WBC in what was a farcical fight.

Turkey's Anvi Yildrim was somehow deemed worthy of challenger status, even though he had not fought for two years and his last performance was a loss to American Anthony Dirrell - who had since lost himself.

It was a quick turnaround for the Mexican, who beat Callum Smith in December last year, but he danced to the WBC's tune and splattered Yildrim inside three rounds in what was a waste of everyone's time except for those earning.

Luckily, we have now arrived at the fight that we want to see, with the best two fighters at 168lbs stepping into the ring.

Saunders has the technical ability to trouble anyone, but he will need to be at his best to compete with a fighter many consider to be the pound-for-pound king.

Tyson Fury currently holds the heavyweight version of the famous WBC green and gold strap and it now looks long odds-on that we will also see the two best heavyweights on the planet trade leather later this year.

Fury and IBF, WBA and WBO champion Anthony Joshua both signed a two-fight deal last week, meaning we are now a step closer to crowning an undisputed heavyweight champion.

Location and date are yet to be announced and there have been plenty of stumbling blocks along the way - most notably Joshua's WBO mandatory challenger Oleksandr Usyk.

As the WBO cruiserweight champion and under the WBO's bylaws, Usyk's decision to jump up a division automatically made him mandatory challenger to Joshua, who also holds the IBO title (but we won't go into that!).

Thankfully the WBO has now sanctioned the undisputed fight with Fury rather than enforcing the mandatory fight - a decision which incidentally came after AJ's promoter Eddie Hearn had suggested, perhaps tongue-in-cheek, that his man would consider vacating his belts to fight Fury anyway and escape the hefty sanctioning fees!

It was refreshing to hear from Hearn that he is open to the option of dropping all the belts, and a move towards the UFC model of one belt for one world champion in each weight class would be welcomed.

It would certainly clear some of the very muddy waters in boxing and no doubt put more money in the pocket of the fighters.

There are eight weight divisions in the hugely popular mixed martial arts competition and each champion has to defend the title once they hold it, except when injured.

After the first instalment of Fury v Joshua, the arm of the new undisputed heavyweight champion of the world will be raised by the referee and then they will be draped in more bling than Mr T.

Everyone knows that they are the number one and number two in the division, the belts are meaningless props and narrative to help sell the fight to the casual audience.

Whoever comes out on top should do just as Bowe did almost 30 years ago and stick all four belts in the bin.

FIRST PUBLISHED 5:00PM, MAR 24 2021
Belts are predominantly in place as marketing tools for promoters and broadcasters to sell the importance of fights