Thomas Tuchel could be a better appointment for Chelsea than expected 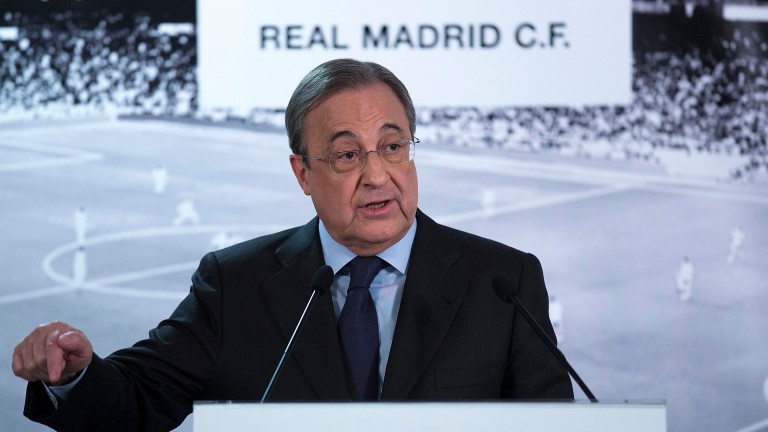 Florentino Perez is one of the most influential figures in modern football, but sometimes the Real Madrid president bears comparison with a stubborn entrepreneur storming out of Dragons' Den after his latest innovation has been rebuffed. It seems he must always get his way.

But Perez getting his way this time would not be a mere blunder that affected only the Madrid club, such as sacking Vicente del Bosque in 2003 or allowing Cristiano Ronaldo to leave the club three years ago, but rather a monumental misfire with far-reaching implications for the entire football community.

The 73-year-old is at the forefront of the potential formation of a European Super League, a competition intended to replace the Champions League and revamp the structure of continental football.

It is a concept which has been whispered about for years but could now have genuine weight behind it after a document laying out the practicalities of the idea was seen by The Times this month. It's an idea one would think had been devised by a bored teenager trying to spice up their latest career on Football Manager.

And the money involved is eye-watering. Any clubs who join are set to scoop an initial £310 million and an additional £213m per season thereafter.

It might seem like the kind of missing-the-point concept put forward by Fifa or Uefa, but both organisations strongly disapprove of a European Super League and neither would give it official ratification.

Any players who would involve themselves in the breakaway league could even face a ban from national team participation and tournaments such as the World Cup.

The impact of coronavirus is thought to have accelerated the European Super League's potential inception but surely the current climate, coupled with the fact that the continent's top leagues look more competitive than ever, means this is the last thing football needs, no?

A competition of this nature would bolster the financial muscle of clubs such as Manchester United, Real Madrid and Bayern Munich but leave European fringe clubs like Leicester City, Lazio and Borussia Monchengladbach with less TV revenue as broadcasters opt to pour their money into the Super League rather than domestic competitions.

And this would come at a time when the major European leagues have been pulsating from top to bottom.

In Spain's La Liga, Real Madrid and Barcelona started the season 4-6 and 15-8 to win the title but have drifted to 3-1 and 9-1 with Atletico Madrid taking initiative at the top.

And even in France and Germany, where 2020 Champions League finalists PSG and Bayern Munich typically dominate, the likes of Lille, Lyon and Leipzig have mounted challenges.

We are finally seeing exciting title races unfold and situations where anyone can beat anyone, not only in the Premier League but across all of Europe's major divisions. Introduce a European Super League and all it will do is make the big clubs bigger.

And what constitutes a 'big' club anyway?

Will it be at the discretion of Perez or other Super League supporters such as Juve chairman Andrea Agnelli and former Barca president Josep Maria Bartomeu as to which clubs will fill the 20 slots?

My beloved Arsenal have been suggested as potential participants, but Leicester have enjoyed Premier League success more recently than the Gunners, who last won the title in 2004. Liverpool did not even have a Premier League title to their name until last year.

And what about newly uncovered Champions League gems Leipzig or Atalanta?

Arguably the best thing about European football is its cyclical nature but we would lose that with a Super League which would comprise pretty much the same teams year in, year out.

Clubs lower down the football pyramid need all the help they can get, not a greater divide between them and the elite. This notion is one which risks a lot for little reward. So sorry Florentino but I'm out.

When the news broke that Chelsea had sacked Frank Lampard and were set to bring in Thomas Tuchel, I was, like most, sceptical. How likely is it that Tuchel will actually bring success to the club more quickly than Lampard?

But in a weird world where I have programmed myself to see the positives in all situations, I realised the move could have a lot of promise for the Blues.

So Chelsea fans, cast aside sentiment for a moment and hear me out.

In Lampard, the London club had an exciting but raw coach who knew how to get the best out of youth but that was about it.

In Tuchel, however, Chelsea will be getting not only a coach but an obsessive manager who likes to be involved in all aspects of the club from player sleeping patterns to recruitment to diet.

He has experienced over-achieving with little Mainz but also led Paris Saint-Germain to their first Champions League final.

He has already worked with Chelsea talents Thiago Silva and Christian Pulisic and could surely hold the key to unlocking the potential of German compatriots Kai Havertz and Timo Werner.

So while Chelsea managers often have the shelf life of a carton of milk, maybe, just maybe, Tuchel could prove us all wrong and buck the trend.

FIRST PUBLISHED 2:36PM, JAN 27 2021
Introduce a European Super League and all it will do is make the big clubs bigger