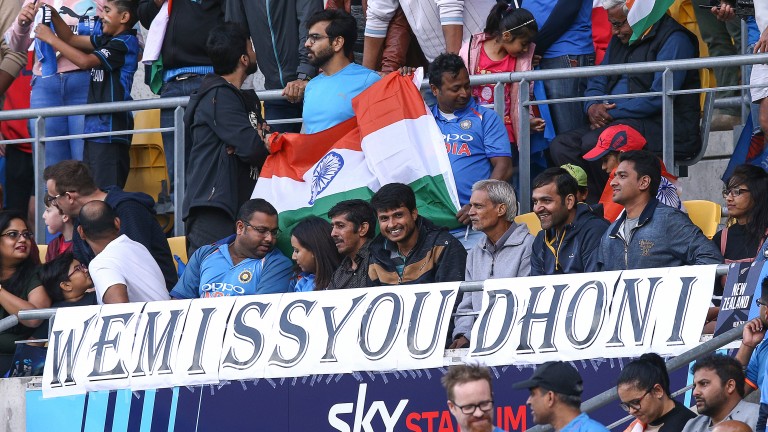 During the heyday of Sir Henry Cecil's unbeaten superstar, one bookmaker ran an advert in the Racing Post featuring the line: 'Death. Taxes. Frankel'.

There was a similar sense of inevitability about the closing overs of Sunday's Indian Premier League playoff between Delhi Capitals and Chennai Super Kings.

Chasing 173 to seal a place in the final, Chennai were cruising at 113-1 before a middle-order collapse handed the initiative back to the Capitals.

By the time Mahendra Singh Dhoni came to the wicket, the Super Kings required 24 off 11 balls. Once their veteran captain had swung and missed at his first delivery, it was 19 off eight. His second ball was pumped over mid-wicket for six but another dot left Delhi's Tom Curran with 13 to defend off the final over.

Curran, a highly competent Twenty20 death bowler with a wise head on his 26-year-old shoulders, had England teammate Moeen Ali caught in the deep off his first ball.

Chennai now needed 13 off five but, crucially, Dhoni was back on strike and, for all Curran's international and franchise-league experience, nothing really prepares a bowler for this type of duel.

For years, Dhoni has been a master of the short-format run chase, letting the required rate tick up to 12 or 13 an over, kidding the fielding team that he's struggling to time the ball, before seemingly flicking a switch and then finishing the contest with three or four brutal flourishes of his blade.

One thing was in Curran's favour, though. Dhoni turned 40 in July and his 2021 IPL stats suggested his powers might finally be on the wane.

Before Sunday's game he had scored just 96 runs from 101 deliveries in this year's tournament. His batting strike-rate (runs per 100 balls) was lower than that of his Super Kings colleague Shardul Thakur in India's Test series against England in the summer.

Had Dhoni gone at the game? Apparently not. A four belted over extra cover was followed by another boundary, off the inside edge. If you're going to flash, flash hard.

Curran tried to limit the damage, bowling a ball well outside the off stump that was called wide. Now just four runs were needed off three deliveries and, to the surprise of absolutely nobody, Dhoni pulled the ball with disdain to the square-leg boundary to seal victory.

At moments such as this it is customary for the commentator to ask rhetorically: "Who writes his scripts?"

In Dhoni's case, a simple Google search reveals the answer: it's a guy named Neeraj Pandey, writer and director of the 2016 biopic 'MS Dhoni: The Untold Story'.

The strapline on the poster reads: 'The man you know ... The journey you don't'. Speaking as a cricket punter, though, I feel I've experienced my own tumultuous journey with Dhoni.

Every bettor has teams or sportspeople they can rely on and others who appear intent on stitching them up at every opportunity. I've always struggled to get on the right side of Dhoni and the teams he captains, which is unfortunate given that he's been around for most of my betting life.

I don't know how much LSD (pounds, shilling and pence, not the psychedelic drug) MSD has cost me over the years but I've certainly developed a minor persecution complex about him.

Ricky Ponting, coach of the vanquished Capitals, hailed Dhoni as "one of the greatest finishers the game has ever seen" but whenever I need some of his late-innings heroics he seems to scratch around before getting out for 11 off 14 balls or something.

Incidentally, Ponting – as befits a man nicknamed 'Punter' – couldn't resist a bit of aftertiming on Sunday, telling reporters: "We were sitting in the dugout thinking if it would be Jadeja or Dhoni coming next. I put my hand up straight away and said I am pretty sure Dhoni will come out now and try and ice the game." What a judge.

I do recall one rare occasion when MS came good for me with a match-winning ODI century against England. I was listening to the commentary outside a retail park in Catford – it was a day to savour for so many reasons – but that, I've just checked, was in January 2017 and it's been meagre pickings since then.

Clearly, Dhoni is a force of nature and players of that ilk cause headaches for punters. You know there's little value in betting on them because everybody knows how bloody brilliant they are – they literally made a feature film about Dhoni – but opposing them is also likely to be painful.

The key is to identify these unstoppable performers as early as possible in their careers. Then it's decision time: can you reconcile yourself to betting on Tiger Woods at 5-2 in a 156-man field or supporting the peerless Phil Taylor in every tournament for the next decade?

Can you commit to backing Cristiano Ronaldo in-play to score the next goal every time his team appear to be heading for a frustrating draw at home to lowly opponents?

If not then the best approach is just to sit back and enjoy these relentless stars without any betting involvement.

After all, I doubt anybody had much fun punting each-way alternatives to Edwin Moses during the legendary 400m hurdler's 122-race winning streak during the 1980s: 'He's looking a bit leggy, his stride pattern is all wrong, he's going to clip one soon … nope, he's won again.'

FIRST PUBLISHED 5:00PM, OCT 13 2021
Every bettor has teams or sportspeople they can rely on and others who appear intent on stitching them up at every opportunity