Qualification phase is in need of a rethink 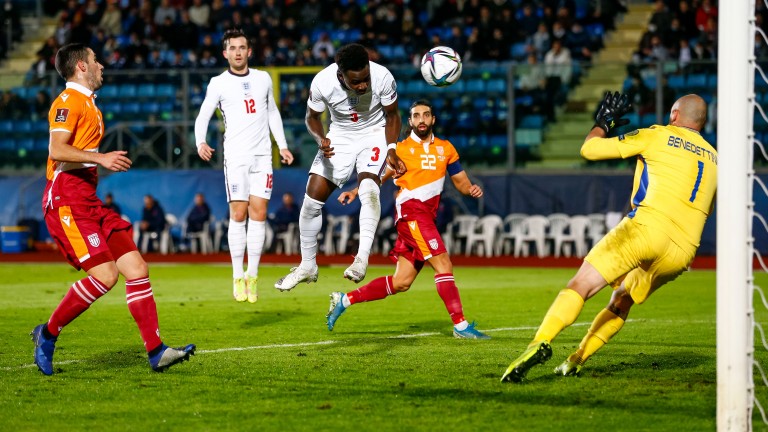 There was not much to be learned as England put San Marino to the sword
Daniel Chesterton/Offside
1 of 1
5:00PM, NOV 17 2021

England booked their place in next year's World Cup in Qatar on Monday night after thumping San Marino 10-0.

The Three Lions were without five first-team stars during their final qualifier but it didn't matter against San Marino, the worst team in international football who were helpless at stopping Gareth Southgate's side from racking up the goals.

I know it's part of my job to watch England, but I could not tell you who played well and what we learned from Monday's win. All I know is England won and it was mission accomplished, but did anyone think anything different would happen?

I wish I could say I was doing something fascinating before rushing to catch the highlights, but I, along with thousands of others, had no interest in watching the Three Lions against a team ranked 210th in the world.

Instead of celebrating another successful qualifying campaign, I've found myself questioning the current set-up within international football.

Don't worry, I'm not trying to emulate Arsene Wenger, but I think the powers that be need to get their heads together and decide if the current format is working.

The last time they decided to do something a little different they moved a World Cup to December, which means instead of packing out beer gardens, we will watch games with the heating on - but that's a debate for another day.

However, the idea of a biennial World Cup does seem silly and such changes to the beautiful game need careful planning and meticulous consideration. Still, there has to be a better solution than playing teams who have no chance of victory.

That isn't directed at San Marino in particular because after all, their squad is doing what we all would do in this situation, but is it time for Fifa to step in?

The players who wear the San Marino shirt with pride are not to blame, but I don't think I am the only person starting to wonder what they are getting from these cricket-score results.

Sure, some of their players will have an enviable memorabilia collection, but they cannot learn anything from these matches.

The consensus from fans in Britain suggests that they cannot wait for domestic action to return. When the likes of San Marino, Gibraltar, Moldova and Malta are named in qualifying groups, it is easy to see why.

San Marino have lost all eight meetings against England by an aggregate scoreline of 52-1.

When they score, their celebrations quickly circulate social media channels and while it is fantastic to see them so happy, why not make it a regular occurrence?

The international calendar is already busy, but those teams would surely learn more by playing each other regularly. Perhaps they could compete in a pre-qualifying tournament before entering the group.

This would improve the quality of the international game and also protect some of the world's best players from meaningless games.

Some will say that's a bit rich coming from an Englishman whose team usually choke at big tournaments, but these games also negatively affect so-called big teams.

Southgate showed no disrespect to San Marino over the weekend, and rightly so, but what has he learned?

Is Aaron Ramsdale ready for the international stage? We wouldn't know yet, because he might as well have not played.

Harry Kane scored four times in one night before being substituted, and yet San Marino's record goalscorer, Andy Selva, finished his career with eight goals from 73 matches.

England have breezed through qualifying campaigns for several years but are often found wanting at tournaments.

The Nations League has helped improve the quality of the international game, and teams are being rewarded for improved results which is how it should be.

Because of the timing of the 2022 World Cup, the football calendar as we know it is being torn apart for a while. Now seems the perfect time to restructure our game and improve it for the long term.

I love an underdog story and would like to see San Marino, Gibraltar, Liechtenstein or Moldova start to improve their world rankings. Still, in the current set-up, they are learning nothing and diluting the quality of international football.

The teams that finished bottom of the ten European qualifying groups won a total of four matches.

That is four success stories from 90 games. The numbers quite simply do not add up, and it's time to alter the qualifying format while we have the chance.

Managers on the right track

And before we all switch our focus back to domestic action, it's important to recognise the work of Steve Clarke, Stephen Kenny and Robert Page.

All three managers have faced their share of criticism but they have proved that they can steer their teams in the right direction with hard work and determination.

Scotland's 2-0 success over Denmark shows the progress they have made under Clarke, and it would be fantastic to see them joined at the World Cup by Wales.

As an England fan, I want the home nations at every tournament to add extra spice to the draw.

Ireland appear to have got the right man in charge to see them through a tricky patch, while Ian Baraclough's Northern Ireland showed they can come again by ending their campaign with a draw against Italy.

Wales and Scotland still have a job to do but their fans can see what can be achieved with a plan in place.