The dream is over but the hope burns stronger than ever 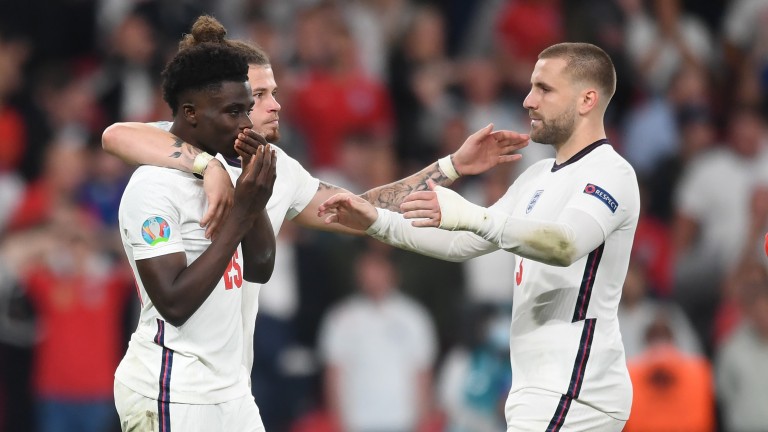 Bukayo Saka deservers support, not hatred, in the wake of his penalty miss
Michael Regan - UEFA
1 of 1
By Bobbie Jackson 5:00PM, JUL 14 2021

After a month full of joy and optimism I came crashing back down to earth much harder than Richard Branson's Virgin Galactic rocket plane on Sunday.

It looked like England were finally going to deliver for the first time in my lifetime. I may be only 31 but I've become all too familiar with the feeling of being deflated upon the conclusion of a major international competition.

My earliest memory of England's pursuit for glory was the 1998 World Cup and the marker was laid down immediately. David Beckham was sent off and the Three Lions went out on penalties in the last 16 against Argentina.

Still, I was optimistic in 2002, arriving at school early to watch my heroes play out a drab goalless draw with Nigeria as they limply made it out of their group.

After reaching the quarter-finals, Brazil sent England packing when Ronaldinho looped a free-kick over the mustachioed David Seaman.

As the years went by the frustration continued. Different managers, new exciting players, but the same gut-wrenching outcome - the group-stage exit in 2014 and the Euro 2016 loss to Iceland being the low points.

But football is a funny thing. Despite being knocked down on more occasions than we'd like to remember we always come running back in the hope that next time might just be different.

Now, I have to admit I wasn't fully on board with the appointment of Gareth Southgate but I convinced myself that surely it couldn't get much worse than the nightmare in Nice. Hearing the Viking clap ring around Wembley on Sunday brought all of those terrible memories flooding back!

But I'm of the opinion that you should back a manager until his job becomes untenable and he did very quickly appear to be going about things differently.

Southgate, a man who bears his own scars from international football, seemingly squashed the old club rivalries that had torn apart the national team for decades, he turned to players that ply their trade away from the big six and, most importantly, he just seemed to get it when his predecessors simply didn't.

He understood the importance of unity, both on and off the pitch, bridging the divide that had grown wider and wider with every underwhelming performance at a major competition - think back to Wayne Rooney's "nice to see your home fans booing you, that's what loyal support is" aimed at fans who travelled to South Africa in 2010 only to see an uninspiring goalless draw against Algeria.

As it stands we are ahead of schedule after this summer's exploits, although it has been argued that Southgate could have gone about things differently on Sunday to complete the job.

The minor details of whether Marcus Rashford and Jadon Sancho should have come on earlier or if Jack Grealish should have been given more gametime will soon fade as distant memories.

We'll all be back to debating whether or not Harry Kane's bootlace was offside in a matter of weeks and shrugging our shoulders as Watford fire another manager just months into the 2021-22 season.

It's worth remembering that England had the second-youngest squad at the European Championships and we came oh-so-close to ending 55 years of hurt.

Kyle Walker was the elder statesman of the squad at 31 and only two others in the 26-man party have hit 30. Surely that has to inspire hope for Qatar 2022.

And so the cycle begins all over again.

I spoke about a sense of unity earlier but that bubble soon burst and the actions of some so-called fans after England's loss to Italy were disgraceful, but painfully not surprising.

Marcus Rashford, Bukayo Saka and Jadon Sancho were the targets of abhorrent racist abuse as if the colour of their skin in some way had an influence on their performance.

The competition started with a plea from Southgate to respect his players after they collectively decided to take the knee before each match in their stand against racism.

Unfortunately, that same backing wasn't echoed from the highest level of government and they were shamefully met with a chorus of boos at the Riverside Stadium in England's pre-tournament friendly against Austria.

As the games went by and the crowds grew and the dissenters were thankfully drowned out by cheers and a show of solidarity, however, that didn't equate to the fight against racism being over and Sunday proves more action is required.

Those same people sending deplorable messages on social media would no doubt have been happy to revel in the euphoria had England's diverse squad of players won the Euros.

The FA and UEFA have condemned the abuse and called for punishments but we've heard this rhetoric before and firmer action is required from governments and football authorities.

Social media companies must be forced to hand over details of the perpetrators to ensure they can be dealt with.

Differing opinions make society and sport great but opinions born out of ignorance and hate must be challenged.

In a racist society, it is not enough to be non-racist, we must be anti-racist. Call it out.

Marcus, Bukayo and Jadon, you were part of something special this summer and we stand with you.

FIRST PUBLISHED 5:00PM, JUL 14 2021
It's worth remembering that England had the second-youngest squad at the European Championships and we came oh-so-close to ending 55 years of hurt