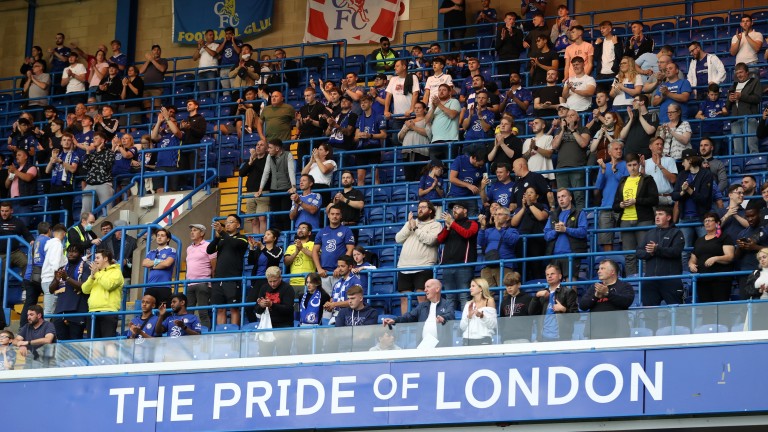 Chelsea are one of a number of Premier League clubs who have already installed safe standing areas
Catherine Ivill
1 of 1
5:00PM, SEP 29 2021

I've never seen myself as a Luddite, either in sport or life in general, but this obsession with change as a euphemism for progress often leaves me wondering what's next and, perhaps more pertinently, why.

Clearly I no longer represent the type of fan on the radar of sports' marketing men, who are seeking to woo the TikTok generation, kids and young adults with time on their hands, money in their pockets, tech on demand and the attention span of a gnat.

My son chided me as a 'legacy fan' at the weekend, emphasising the difference between a bloke in his mid-50s who still appreciates the cultural qualities of matchday programmes, Bovril and a faulty PA system, and someone like him who swears extra-time in a FIFA 21 match is some sort of inconvenient endurance test.

We want different things from our sport. I like drawn Test matches and rattles; he wants YouTube highlight packages and half-and-half scarves.

And I accept that his generation will win out and that's as it should be, which means they will be catered for more and more and I'll just be ushered into some retirement home nursing my VHS collection of 1970s FA Cup finals and moaning there'll never be another Geoffrey Boycott.

So – and I agree it's pathetic, but bear with me – the devil within me couldn't have been happier on Saturday night when Oleksandr Usyk took care of Anthony Joshua at the Tottenham Hotspur Stadium, a rare display of fight and passion at that venue this season though we'll save that conversation for another day.

I'm not a Joshua hater and I hadn't had a bet so there was no financial implication. Indeed, I don't like boxing.

The last time I was actually at a fight – in a working capacity, nothing more – was also at Tottenham, at White Hart Lane as it was in 1991, for that harrowing, heartbreaking bout between Chris Eubank and Michael Watson. There was nothing noble about the supposed noble art that night.

Boxing is one of those sports which is forever trying to innovate, to glamorise, pulling stunts galore, often misguidedly, to feed the insatiable appetites of the box-office masses. So you get blokes in cages punching and kicking seven bells out of each other, Andrew Flintoff dragged into a ring, Mike Tyson and Roy Jones hauled out of retirement for some non-event or other and a YouTuber being biffed by Floyd Mayweather. It's almost beyond parody.

Mark my words, within five years the winner of Strictly will be taking on a bear at the MGM Grand.

The one relatively gimmick-free storyline the boxing world did have to cling to was the zillion-pound prospect of the ever-so marketable AJ squaring up to Tyson Fury, somewhere in Saudi Arabia or space or who knows where, but now that's been blown out of the water by a short, balding family man from Ukraine who doesn't speak any English. Boxing purists seemed to approve; boxing's money men will have been absolutely gutted.

And as I said earlier, yeah it's childish, but I did think that was a giggle.

Football is ever trying to change with money generally the determining factor, hence the ill-fated plan for a European Super League and this week Arsene Wenger's radical shake-up of the international circuit where the headline grabber was a World Cup every two years instead of every four. Wenger is employed by Fifa and Fifa only make money in World Cup years so see if you can figure out what might be the driver behind that brainwave.

Mind, it isn’t only Fifa in possession of a to-do list of other things football-related to fiddle with, the thorny issue of safe standing at football grounds another idea that seems to be gathering traction and one which ought to appeal since it's ostensibly a retrograde step, something for us dinosaurs.

For 25 years now there has basically been a blanket ban on standing in football's top two divisions, a response to the horrors of Hillsborough and absolutely welcomed when it was introduced.

Which begs the question, why? Why would anyone, even inadvertently and with no-doubt reasonable intentions, want to run the risk of undoing such a transformation?

At the moment only pilots are planned but it's got cross-party support and fans obviously love the idea so I think we can presume it's going to happen. And in all honesty, it makes sense.

My blessing, should anyone care, would only be given though if the Hillsborough relatives approve of the idea. Given the scars they carry, their voice outweighs any clarion call from politicians, fans' groups or thinktanks.

FIRST PUBLISHED 5:00PM, SEP 29 2021
For 25 years now there has basically been a blanket ban on standing in football's top two divisions