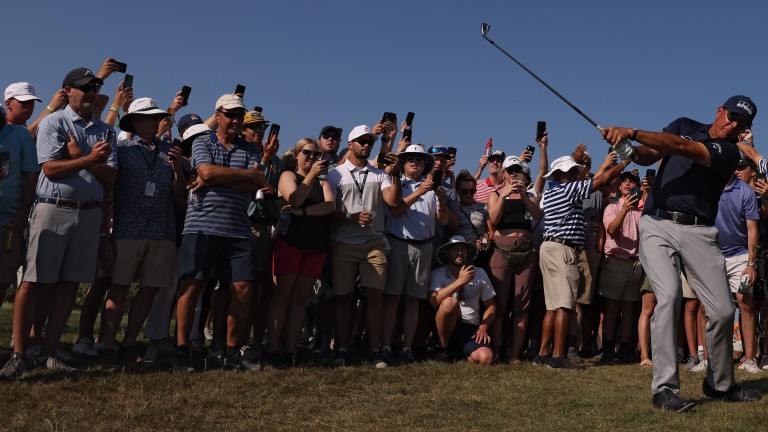 Gradually the light that was barely visible at the end of the tunnel for so long is starting to shine on us, and it is glorious.

Whether it is a much-awaited meeting with friends or family, a pint in our favourite local, a trip to the cinema or a day at the races, things are beginning to return to normal in a way that makes normal feel sensational.

One of the remaining barriers to the end of these arduous Covid-related restrictions is the ending of limits on crowds at sporting events, and we were given a tantalising taste on Sunday night of just how wonderful it will be when we can form a small part of a mass of spectators, adding sound and colour to events and contests that have been so sterile while the turnstiles couldn’t rotate.

US golf galleries would not be many people’s idea of the perfect sporting crowd. Most on-course spectators are perfectly nice, I’m sure, but a loud minority spoil things by yelling moronic things just as players strike the ball, and there is a growing trend towards a lack of applause for good shots due to the fact so many people behind the ropes are filming the action rather than reacting to it.

But at Kiawah Island on Sunday there was a big crowd and an even bigger buzz as one of the great golfing moments unfolded. Phil Mickelson, so regressive he was sent off at 250-1, somehow found the game and the temperament to become the oldest Major winner ever.

At nearly 51, and more than 30 years after his first PGA Tour victory when he was still an amateur, Lefty conquered the longest course in Majors history in thrilling style to send the spectators into a frenzy that made for the most uplifting viewing, particularly as the crowd swarmed on to the final fairway, engulfing the players and caddies.

So many times during this dark time in our lives I have watched beautiful performances and victories and yearned for the triumphant teams and athletes to have been able to bask in the atmosphere their brilliance would have created, so it was a huge joy that Mickelson could savour the magic of his finest hour.

When I packed in this weekly column lark I did so knowing I had covered pretty much everything I had ever wanted to get off my chest, but there was a tinge of regret that I had not done the Phil Mickelson appreciation piece. Well, here it is.

Almost ever since Sky brought live golf on to our screens in the early 1990s Mickelson has been one of the stars of the show.

In a sphere notable for so many slow, steady, dull competitors, he has shone for three decades, the swashbuckling gambler who gets that sport is entertainment like few others.

He has long been affectionately known on the Racing Post sports desk as the Imbecile, a nickname that was created when colleague Paul Kealy, exasperated at losing a bet on Mickelson when he took dead aim at the pin and found the water despite having had enough of a cushion to have safely laid up, texted in anguish: “He’s got the course management of a f***ing imbecile.”

He is, of course, no imbecile, even though that was far from the only time a punter whose money was riding on Phil wished he’d taken the safe option.

But his sense of daring has always been what has made him so special. Like the time when, after a wild drive ended up in a hospitality box, he strolled into the facility and played out from there, casually refusing a beer from a guest.

Or the outrageous flop shot at the Deutsche Bank Open from a seemingly impossible position that landed within three feet and left commentator Frank Nobilo gasping: “That’s just not fair.”

But there is more to Mickelson than his brilliance. He gives a lot to the crowd and in interviews. He’s a good laugh on social media, and as he has got older it has become even easier to warm to him as he lollops along the fairways with that slightly awkward gait, like a mildly arthritic gardener pushing a heavily-laden wheelbarrow.

For a man who has earned $94 million in prize-money and loads more in endorsements there is something quite charming about the way he bows and touches his cap after a decent shot, as if he’s a humble footman welcoming his aristocrat master out of a stagecoach.

This may well have been Phil’s last blast. It is almost impossible to compete at the top level beyond 50 and the rest of his form apart from last week’s miracle has been sketchy.

But what a magnificent way to bow out at the top level with one of the greatest performances the game has ever seen.

As one whose life has been so enriched by watching sport, I can safely say few people have played a bigger part in that than Phil Mickelson.

It was not the most thrilling Premier League season of all time. Nobody would dispute that. A lack of crowds, an excess of VAR interventions and the main issues being tied up well before the final day meant suspense and intrigue largely had the year off.

But we should not overlook how much harder lockdown life would have been without the games having been live on TV to existing subscribers (except for that idiotic, short-lived pay-per-view experiment) plus a few more being on BBC.

It was a season defined by two remarkable slumps, one of which was remedied well before the other. Manchester City were the first to wobble, gaining only 12 points from their first eight league games before they regained their poise and steamrollered their way to the title.

Liverpool had looked sure to capitalise on the Citizens’ slow start, and had amassed 31 points from 14 games by the time they won 7-0 at Palace in December.

But they fell apart during the winter, incredibly managing just 12 points from their next 14, and even though they recovered well to capture a Champions League spot on the final day they ended up 17 points off the top.

That winter of discontent was remarkable when measured against their overall performance in the last three seasons. They averaged just 0.86 points per game during that troubled spell when Klopp was still trying to solve their defensive injury crisis, which compares to the 2.53 points they averaged in the other 100 games they have played since the start of the 2018-19 season.

The betting for next season suggests Liverpool are around as likely as Chelsea and Manchester United to dethrone City, but given the mitigating circumstances surrounding this season’s slump, it would be dangerous to regard the Reds as a spent force.