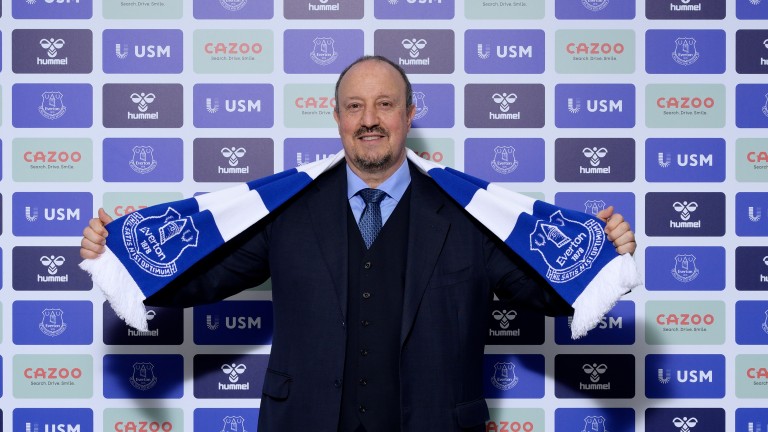 The new year can be a cruel time for football managers. While the rest of us can attack 2022 with gusto, convincing ourselves – at least for a few days – that we're going to eat well, exercise regularly, and excel in our professional and personal lives, Watford's Claudio Ranieri and Everton boss Rafael Benitez begin the year jostling for favouritism in the sack-race market.

Everton's 3-2 home defeat to Brighton on Sunday extended their lean run in the Premier League to one win in 12 games and their bright start to the season (they took ten points from their first four matches under Benitez) is a distant memory.

Rafa is an obvious target for frustrated Toffees supporters, having arrived at Goodison Park with a fair bit of Liver Bird-embossed baggage, but the club's problems are deep-rooted.

Everton's desperation to compete with the top clubs has resulted in a scattergun transfer policy. Current forwards Dominic Calvert-Lewin, Richarlison and Demarai Gray were all shrewd signings but few of the other recent arrivals at Goodison will be remembered fondly.

Too often, the rationale behind Everton's recruitment policy appears to be 'we've heard of this player and he's willing to come to us' – examples include Theo Walcott, Davy Klaassen, returning hero Wayne Rooney, James Rodriguez, Alex Iwobi and Andros Townsend – rather than 'this is a player who will improve our team'.

It's a similar story with their managerial appointments. Since the departure of David Moyes, the six permanent Goodison gaffers have been Roberto Martinez, Ronald Koeman, Sam Allardyce, Marco Silva, Carlo Ancelotti and Benitez (and the next one, the betting suggests, may well be returning hero Wayne Rooney).

None of those six were left-field appointments, only Martinez and Silva might have been regarded as unexposed types, and most of them were aware that, whatever sort of job they did at Everton, they would still have attractive employment opportunities elsewhere.

And here is the root of the issue for the Toffees: what are they supposed to achieve, realistically? English football wasn't invented in 1992 but it certainly changed dramatically 30 years ago and Everton have been the biggest losers in the modern era.

That's not just a gratuitous insult: they have lost more Premier League matches (402) than any other club, ahead of West Ham (400) and Newcastle (383), and that statistic is emblematic of their status in the top flight.

Everton are part of the Premier League furniture – despite this season's travails they are still 12-1 to be relegated – but the absolute limit of their league ambitions would be to emulate Moyes's West Ham side, who finished sixth last season and are leading the way in the race without the big six again this term.

Pundits used to breezily advise mid-table clubs to give the fans something to celebrate by winning a cup competition but that is a tall order these days. The FA Cup has been won by Manchester United, Arsenal, Chelsea, Liverpool or Manchester City in 23 of the 26 seasons since Everton lifted the trophy in 1995.

And City have claimed the EFL Cup in six of the last eight years before plucky underdogs Chelsea, Tottenham, Arsenal and Liverpool reached the semi-finals this term.

All the hype, outrage, whataboutery and recency bias that surrounds 21st-century sport makes it tricky to distinguish between a poor run of form, a full-blown crisis, and a long-term malaise.

Of course, those disasters will soon be forgiven and forgotten when Australia come to England in 2023 and are routed by the evergreen James Anderson and Stuart Broad on juicy seaming pitches under cloudy skies.

Turning around Everton's gradual three-decade decline is a far harder task and the Toffees' main hope for the new year must be that there are three top-flight teams worse than them.

2022 is less than a week old but we may already have witnessed the biggest cricketing shock of the year as Bangladesh defeated New Zealand in the first Test in Mount Maunganui.

Pre-match, Bangladesh had been available to back at 29-1 on the Betfair Exchange. New Zealand, inaugural winners of the ICC World Test Championship last year and formidable opponents on their own patch, were around 1-9 for victory – odds indicative of the fact that it is virtually impossible to fluke a win in Test cricket.

The Tigers, missing star men Shakib Al Hasan and Tamim Iqbal, had lost all 32 of their previous away matches against New Zealand in all formats yet they ran out convincing winners by eight wickets, chasing a target of just 40 in the fourth innings of the match.

Bangladesh's bowlers produced stirring fightbacks in both innings, reducing the Kiwis from 189-2 to 328 all out and from 136-2 to 169 all out. Their first-innings total of 458 was a real team effort with four batsmen scoring half-centuries and number eight Mehidy Hasan Miraz making 47.

The win was sealed by a boundary hit by Mushfiqur Rahim, who stands 5ft 3in, off the bowling of 6ft 8in paceman Kyle Jamieson – a fitting end to a David-versus-Goliath triumph.

FIRST PUBLISHED 5:00PM, JAN 5 2022
Rafa is an obvious target for frustrated Toffees supporters, having arrived at Goodison Park with a fair bit of Liver Bird-embossed baggage