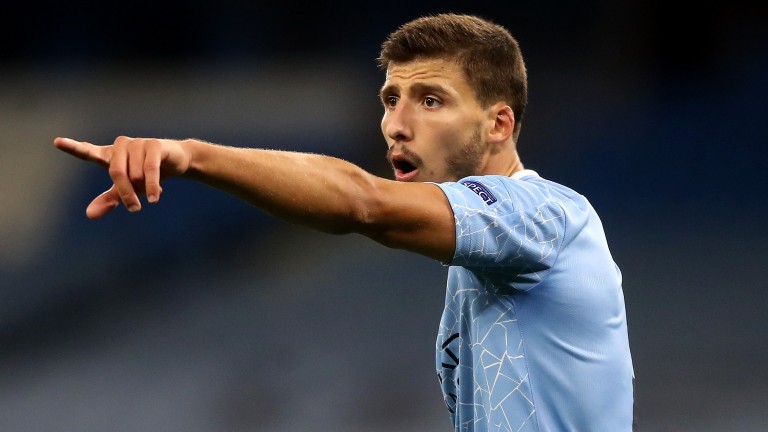 A relegation for Sam Allardyce, no fans in the stands and the Big Six threatening to leave and join a breakaway league - the 2020-21 Premier League season has defied description but I have tried my best to make sense of it all with my own end-of-season awards...

From Eliaquim Mangala to Nicolas Otamendi, Manchester City have tried and failed multiple times when it has come to the recruitment of a top centre-back in the last decade.

They got closer to what they needed with the acquisition of John Stones and Aymeric Laporte but not until they signed Ruben Dias from Benfica at the start of the season had they found a genuine long-term replacement for Vincent Kompany.

City can generally rotate their options in the final third and still hold the upper-hand in games but take Dias out of the equation and they are a weaker side.

The Portuguese star has reinvigorated City's defence with his composure on the ball and commanding voice, making 31 appearances and helping them record 18 clean sheets in the Premier League this term.

Bruno Fernandes deserves an honourable mention for his goals and assists but Dias, as well as deserving the award for Signing of the Season, has been the transformative force in the best team in the division.

So elusive and authoritative is Phil Foden on the ball that it can be easy to forget he falls into the bracket of 'Young' Player of the Season.

The 20-year-old is perhaps the most exciting player not only in the Manchester City camp but in the Premier League at the moment and for England he could be the creative midfield outlet the Three Lions have long required to win major tournaments.

David Silva's departure to Real Sociedad last summer opened the door for Foden, who has been one of the greatest beneficiaries of Pep Guardiola's possession-heavy, striker-less system, netting seven times and laying on five assists in the league this campaign.

Mason Mount would be my second pick for this accolade - the 22-year-old, who has just won Chelsea's own Player of the Season award, was given a chance by Frank Lampard and has gone a step further under Thomas Tuchel. He still has plenty to learn but has shown great versatility to play across the front line or in the attacking midfield positions this term.

The last year has shown you cannot rule out anything in the sporting world but David Moyes and Manchester United flop Jesse Lingard propelling West Ham into the European places? Surely that would be a bit far-fetched.

After finishing 16th in the top flight last term, the Hammers started the season as 5-1 shots to be relegated but a run of seven wins in nine games from New Year's Day until mid-February moved them from the mid-table positions to genuine contenders for a Champions League berth.

Even though the top four is now out of the question it has been an incredible season for the Londoners with Lingard, Tomas Soucek, Michail Antonio and Jarrod Bowen all showing they can mix it with the best.

Where do you even begin with Arsenal? After 24 consecutive seasons of European football, the Gunners look as though they will fail to qualify even for the continent's new third-tier competition, the Europa Conference League.

They were 8-13 to make the top six in the ante-post betting but that now seems generous given what we have seen from them this campaign.

Former Premier League Golden Boot winner Pierre-Emerick Aubameyang has been nowhere near his best, summer signings Willian and Thomas Partey have flopped and the club lack an identity under Mikel Arteta, who is yet to fully convince the Gunners' fanbase.

Add to that a growing divide between supporters and owner Stan Kroenke and it is clear there is plenty to sort at a club who would have been optimistic at the start of the season following last year's FA Cup success.

I cannot recall a more unexpected result than this one. Having revelled in rivals Manchester United's 6-1 defeat to Tottenham earlier in the day, Liverpool fans saw their side obliterated at Villa Park, despite having 70 per cent possession.

It was the first time we saw cracks show in Liverpool's title defence. It was the moment Aston Villa fans realised they could do more than just merely survive in the Premier League this season. And it was the moment Ollie Watkins showed he has what it takes to play in the top flight, firing a hat-trick against the reigning champions inside the opening 39 minutes of the contest.

Arsenal beat Tottenham 2-1 in March's north London derby but a small consolation prize for Spurs was Erik Lamela scoring not only the goal of the game but my goal of the season.

Gareth Bale made a superb cross-field pass to left-back Sergio Reguilon, who knocked the ball across goal with his first touch before Lucas Moura set up Lamela to convert with an inch-perfect 'Rabona' strike.

It was a goal featuring exceptional technical accuracy in a high-stakes contest. Of course it was somewhat tainted by Lamela's sending-off only 43 minutes later.