Four years on and no nearer a payout 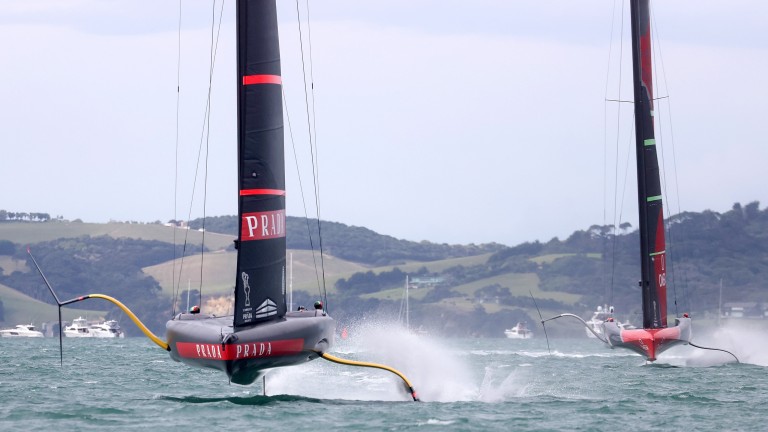 We aren't as punters afforded many opportunities to celebrate sporting splendour at sea while having a bet, which is why it gives me enormous pleasure to mark the climax of the 36th America's Cup.

I say climax as though it's been in some way an eventful, exciting voyage, a four-year spectacle of high drama on the high seas to get us to a point where the last two boats floating can go mast to mast, tiller to tiller for the right to lift the Auld Mug. It's actually been nothing of the sort.

The reality is it's taken the best part of four years to whittle four boats down to two and by the time you read this – weather, covid and whatever else permitting – those final two, New Zealand's Te Rehutai and Italy's Luna Rossa, will be a couple of races into a best-of-13 showdown for the ultimate in maritime bragging rights.

Me? I'm on the Italians at 21-10 though reluctantly, the scars from Roberto Baggio blazing his 12-yarder into some Californian's back garden all those years ago having never quite healed. Still, Forza Italia and all that.

Landlubbers in this country seem to have a generally jaundiced view of the sailing fraternity and events like the America's Cup will never help alter those preconceptions.

This sceptred isle may be more septic than sceptred right now but it's still an isle, surrounded by water, and should you wander down to The Solent on any decent day your view across to the island will be studded with all manner of crafts, from ketches to kayaks, trawlers to trimarans, ferries and fishing boats, the clowns from the tech helpdesk on their jetskis.

Peer out to sea at any time of the year and the chances are there is some middle-management sales exec from Solihull realising a lifelong dream by rowing blindfold to Cape Cod in a yoghurt pot to raise £200 for a hedgehog charity. It's the siren call of the sea, you see, the hypnotic, beguiling, enchanting cry of the foghorn through an autumn mist, it lures you in.

But landies don't quite get it and the America's Cup, where weight of wallet rather than calibre of skipper separates the best from the rest, merely plays to their notion that those who frolic in the waves have more money than sense.

And certainly the qualifying rounds of the America's Cup are about as daft and drawn-out as any qualifying event. And yes, that includes the Nations League.

Six challengers to the holders New Zealand were declared but three didn't even make it out of dry dock. Two qualifying events, in Sardinia and Portsmouth, were then scrapped because of lockdown, a third in December was won by the Kiwis, who didn't need to be in it since they were already finalists. A fourth attempt, the December Cup, was cancelled because of lack of wind.

So three crews – Luna Rossa, Ben Ainslie's Ineos-backed British boat and American Magic – raced off, finally, to pick a finalist. Team Ineos won it, but in fact had done no more than win the right to a race-off against the winner of a playoff between (yes, you've guessed it) Luna Rossa or American Magic.

You could pay off half the world's debt with the money that's been thrown  at this event which, of course, will be money supremely well spent should Luna Rossa land the bet.

Likeable Souness wide of the mark with his ref gripe

There are definite parallels between Graeme Souness's playing days and my driving lessons – intense focus, great spatial awareness, a general sense of being in control, but every now and then there might just be the odd mishap, maybe a missed traffic light here or a chest-high, studs-up, two-footer there. Little things.

I warmed to Souness back then and today I find him an engaging and welcome guest in any matchday studio. His default position, like that of many, is to criticise first, praise later, but whereas Roy Keane, say, will often swerve the 'praise' element of that mantra altogether, Souey does at least stick to the brief.

He's blessed with unquestioned knowledge and an eloquence in delivery – but he also possesses a blind spot, which is his constant plea for referees to have been ex-professional players, the argument being that only if you've played the game can you truly understand it.

Beyond the fact that's utterly disrespectful to the men and women who do this most thankless of tasks and thoroughly patronising, it's also wrong.

If I need guidance on my pension I don't ask a pensioner just because he happens to be one. I'd rather seek counsel from someone who has been trained in the art of dishing up sound independent financial advice, understands gilts, bonds and the tax system and still has his own teeth.

Souness's issue, as with all pundits who rail against referees, is nearly always with the laws of the game rather than the men and women in the middle who continue to do a splendid job – yes, even Lee Mason – with little in the way of love in return.

And the next time I bump into Darren Drysdale I will tell him as much, incredibly politely.

FIRST PUBLISHED 5:00PM, MAR 10 2021
The qualifying rounds of the America's Cup are about as daft and drawn-out as any qualifying event. And yes, that includes the Nations League.