Verstappen or Hamilton would be deserving winner 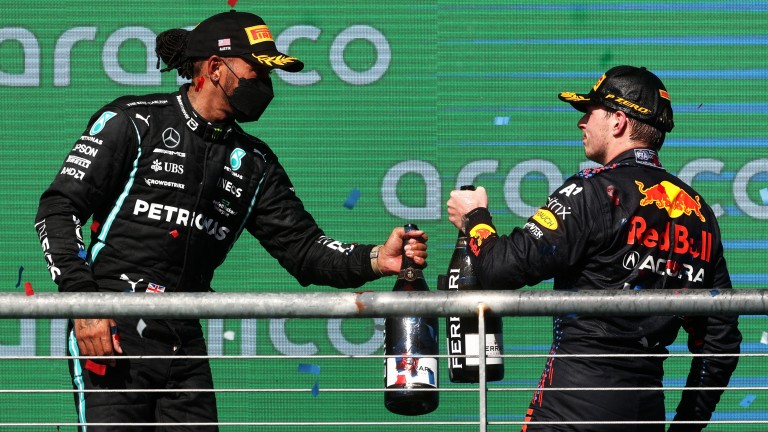 All great sporting dynasties come to an end. If you check the Premier League table, you'll see Manchester United are no longer 15 points clear of the field. It's been a while since Ed Moses won a 400-metre hurdle race, and while I appreciate it's dangerous to say this the day they play in a global tournament semi-final, the Aussie cricket team aren't the all-conquering force they once were, either.

Another spell of sporting domination that could come to an end this season is Lewis Hamilton's reign as the undisputed number one in Formula One.

If he doesn't win an eighth this year to go clear of Schumi on that list too, it will be nothing to be ashamed of.

Hamilton is a general 100-30 shot to prevail in his battle with Dutch ace Max Verstappen, who leads him by 19 points with four races left, starting with Sunday's Brazilian Grand Prix.

To put that into context, that's one point more than a driver scores for finishing second in a race, but such a gap could only be wiped out if the other driver fails to score. A better point of reference is the seven-point gap between the reward for first and second place, which shows that barring incidents or engine trouble, Verstappen really has one hand on the trophy.

The 24-year-old has won nine of the 18 races this season, a figure Hamilton can only match if he wins all four remaining rounds in Brazil, Qatar, Saudi Arabia and Abu Dhabi. Such an occurrence would guarantee the British driver his eighth title, but the trends suggest it's not going to happen.

Three of Hamilton's five wins this season came in the first four races. His only successes since the Spanish Grand Prix in early May came in the British Grand Prix at Silverstone, when he infamously clashed with Verstappen at Copse corner, and in Russia, when he benefited from a late rain deluge that denied fellow Brit Lando Norris a first career victory.

If anything, Verstappen's car advantage is growing greater as the season goes on. He even won at a Mercedes stronghold in the United States last month before adding another victory from third on the grid in Mexico on Sunday.

Hamilton's comments about Sergio Perez being so close to him in Mexico City showing how fast the Red Bull is now were typically misinterpreted from those who like to have a dig at him as being a personal insult to Perez, rather than an appreciation of his rival's car.

The growing realisation that he's fighting an uphill battle had also been clear earlier in the weekend from the desperation in his voice at being told the Red Bulls were six-tenths of a second faster per lap at one stage. But Red Bull's improvement is undeniable. Perez had two podium finishes in the first 15 races, but has made the frame in the last three events now.

Here's the thing. Whoever wins the title, we'll have a great champion. And whoever finishes second, they will have played a full part in making it one of the best title races for years. That's what matters.

Verstappen is blindingly quick, ruthless (sometimes overly so) and has that knack of making some very rapid teammates look like back-of-the-pack plodders that the true champions such as Schumacher, Fernando Alonso and Hamilton have. He would be a fine and deserving winner.

Hamilton still has a year or two left in him to go for that eighth title, even if he doesn't get it this time. And what a season we have in prospect next year with the super-fast Briton George Russell joining Hamilton at Mercedes.

There's no guarantee Hamilton will even have a competitive car next year, given the major regulation changes coming in, opening the door for one team to steal a march on their rivals if they find a crucial edge.

But if Hamilton ends his career with seven titles, 100 race wins and 101 pole positions, he'll still be the best of the best. It's just a shame more people don't appreciate him while they can.

Get on Netflix to thrive, not just survive

While F1 has its issues to deal with - the list of venues for the final races isn't to everyone's taste, and in a world of climate-change conferences, a flying circus of freight is hard to argue for, even with the efficient fuel advances and hybrid power technology the sport has helped to fast-track.

But one surprising area of success for the sport has been a breakthrough in its popularity in America, sparked by an unlikely source.

The recent US Grand Prix in Austin was attended by a sell-out crowd of 380,000 over the weekend, when a decade ago it was struggling to get locals to turn their heads away from Nascar racing.

A widely-cited reason for the change is the Netflix series Drive To Survive, which in three seasons has captured the imagination of the American public and won over a nation of new fans.

McLaren's Daniel Ricciardo appeared on the Ellen DeGeneres Show after the iconic TV host became entranced by the documentary series despite knowing nothing of the sport previously.

A second US race is already confirmed for Miami next season with talk of a third in Las Vegas being added in the near future.

So now we know that all horse racing, or County Championship cricket, or snooker, has to do in order to break America is give Netflix a call and hope for the best.