Depth of squad boosts Citizens' bid for the quad 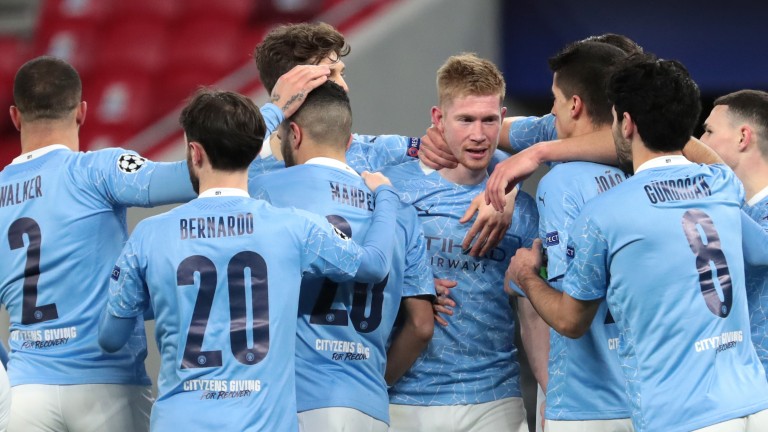 Spring is here, the lambs are in bloom, and new-born daffodils are giddily taking their first knock-kneed steps across the fields.

Joanna Lumley is on the telly, encouraging an all-too-suggestible viewing public to drink Baileys Irish Cream out of enormous hollow chocolate Easter eggs.

The days are getting longer – at least according to those people who insist that "away goals count double" – and backers of Manchester City to win the quadruple are starting to feel excited.

Yes, it's that time of year again. Remember, though, the first rule of Quad Club is 'You do not talk about Quad Club in a press conference before the second leg of a Champions League last-16 tie against Borussia Monchengladbach'.

City's cheery occasional left-back Oleksandr Zinchenko forgot that edict last month when he admitted to the world's media that the thought of winning the Premier League, FA Cup, EFL Cup and the Champions League had crossed his mind.

Fortunately, like a world-weary politics professor picking apart some idealistic young student's essay, Pep Guardiola was on hand to bring that zany Zinch down to earth.

"I am older than Mr Zinchenko, I have more experience and I don't agree with him," the City boss declared. "Four titles is a utopia. It never happened before and I think it's never going to happen."

Pep may be old and wise and fond of wearing a black polo-neck sweater (a surefire sign of a colossal IQ) but Coral are offering odds of 13-2 about the thing that is "never going to happen" in fact happening before the end of May.

I am younger than Mr Guardiola, I have less experience, I don't wear black polo-neck sweaters, and I don't agree with him about City's chances of a clean sweep.

Obviously, Pep is not going to talk up their quad hopes because if they end up winning 'only' the Premier League it will feel like an underwhelming campaign.

But it wouldn't be too gung-ho or hubristic for him to say something like: "It's a big ask and we'll need a bit of luck but if you can get 10-1 about us scooping the lot then fill your boots."

Let's consider the state of play. The Citizens are 14 points clear of Manchester United in the Premier League, having played a game more, and they travel to third-placed Leicester, who are one point further back, on Saturday.

City are 1-500 to win their fifth league title in ten seasons and they can claim a sixth EFL Cup in eight years when they face Tottenham in the final on April 25.

Jose Mourinho, whose love of trophies is so intense that if you cut him he bleeds silver polish, would take great pleasure in derailing Guardiola's juggernaut but it's hard to argue with odds of 1-3 about City retaining the League Cup.

The other two legs of the fourfold, the FA Cup and the Champions League, appear less straightforward.

The Citizens face Borussia Dortmund in the quarter-finals of the Champions League although BVB's star striker Erling Haaland may still be reeling from his failure to score for Norway in last week's World Cup qualifier against Gibraltar.

Next up is a semi-final clash with Bayern Munich or Paris St-Germain, last season's finalists, before what the betting suggests will be an all-Premier League final against Chelsea or Liverpool.

Thomas Tuchel's Blues, who have conceded just two goals in 14 games since the German took charge, also stand in the Citizens' way in the FA Cup semi-finals.

Chelsea appear increasingly difficult knockout opponents and, just in the last six weeks, they have kept clean sheets against Liverpool and Manchester United in the league and beaten Atletico Madrid 3-0 on aggregate in the Champions League.

This will be City's fourth FA Cup semi-final in five years. They beat Brighton 1-0 in 2018-19, going on to complete an unprecedented domestic treble by thumping Watford 6-0 in the final.

However, they suffered surprise defeats to Arsenal in 2016-17 and last July, when the 17-2 Gunners deservedly won 2-0 at Wembley.

Four weeks later, City were knocked out of the Champions League by 12-1 shots Lyon, losing 3-1 in a one-off quarter-final in Lisbon.

In both of last season's knockout shocks, Guardiola's side seemed strangely subdued and indecisive in both penalty areas.

There should be no such complacency or lethargy on this term's run-in given the tough tests posed by Mourinho's Spurs and Tuchel's resurgent Chelsea in the domestic cups and Dortmund, followed by Bayern or PSG, in the Champions League.

And there are plenty of reasons for City, and their clean-sweep backers, to believe. It is hard to pick holes in their form – 25 wins in their last 26 games in all competitions – and they have improved dramatically in defence since last season's league and cup disappointments.

Their squad depth is the envy of Europe, allowing Guardiola to manage his players' workloads carefully without weakening the quality of his starting line-up.

Only two outfield players, Ruben Dias and Rodri, have started more than 23 of City's 30 league matches this term and that relative freshness is a significant boost to their chances of an awesome foursome.

And just imagine the celebrations if they manage it – the fireworks, the open-top bus parade, Zinchenko supping Baileys out of a lifesize chocolate model of Pep's head.

It's never going to happen? We shall see.

FIRST PUBLISHED 5:36PM, MAR 31 2021
Pep is not going to talk up their quad hopes because if they end up winning 'only' the Premier League it will feel like an underwhelming campaign