Despite football's faults it remains vastly superior to rugby union 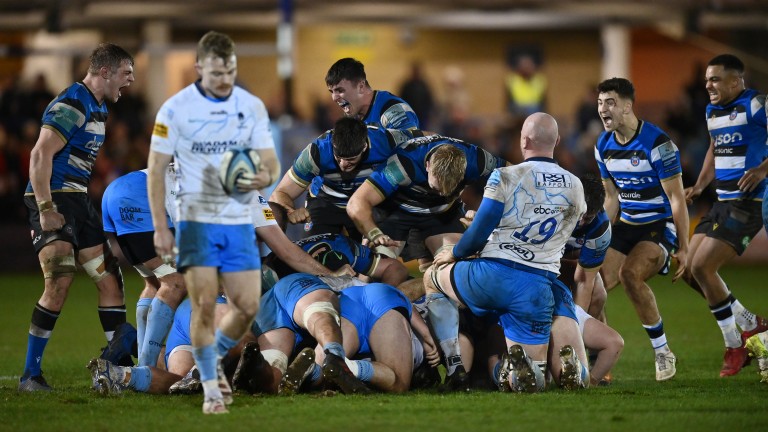 Bath players celebrate their victory over Worcester on Sunday at the final whistle
Dan Mullan (Getty Images)
1 of 1
5:00PM, JAN 12 2022

The debate about whether football is better than rugby union shouldn’t really need to happen, in the same way you wouldn’t try to claim Right Said Fred were a better band than Radiohead.

But some rugby fans brazenly attempt to bang that drum so it is worth reminding ourselves why football is a vastly superior sport, something that was hammered home to me on my first ever attendance at a Premiership game last weekend.

I’d always fancied going to a game at Bath when previous visits to that beautiful city had shown how centrally located their quaint ground is, so when it was discovered a spot of tourism happened to coincide with a match I got some tickets.

In this column a few years ago I said there were three things football could learn from rugby union:

Those points still stand. Football willingly lurches ever closer to a crippling shortage of officials with its imbecilic, incessant campaign of abuse of referees, the ceremony that takes place every time one player replaces another is ludicrously time-consuming, and it is still annoying that a match has to be halted while a physio lumbers across the field to treat a player who is a metre inside the touchline in very little discomfort.

From my visit to the Rec on Sunday you can add a couple of extras to that list, the first being a more mature use of VAR, whereby the referee reviews incidents on the same big screen the fans can see.

And it is also high time spectators were able to simultaneously drink alcohol and watch the game. Bath were even selling two-pint buckets of lager called the queuebuster, and nobody seemed to act the goat after consuming too many.

It would be daft not to acknowledge that the rugby union crowd is more civilised, but football fans deserve the chance to drink and watch. They can always have the threat of bans for certain sections if there is any misbehaviour, but it is unfair that tens of thousands cannot enjoy a beer during the game in case the odd wally can’t handle it and invades the pitch.

Talking of pitch invasions, this leads me on to the maddest aspect of Sunday’s game against Worcester. I’d imagine Erika Roe is one of the last people to illegally storm on to a rugby pitch 40 years ago, but legitimate incursions on to the field of play are a comically bizarre feature of modern-day egg-chasing.

At every stoppage (and boy were there a lot of stoppages) around a dozen figures, clad in masks and bright orange bibs, would emerge on to the pitch from various parts carrying drinks, medical equipment and other unknown holdalls.

And that was in addition to the substitutes, who had no hesitation in swarming all over the field as part of their warm-up while play was going on.

At one point, while a player was kicking a penalty into touch, I swear there were more than 50 people strewn across the playing surface. It was ridiculous.

Equally ridiculous is the idea that anyone inside the ground has a clue what’s going on half the time. It is hard enough knowing what the random penalty generator (also known as the referee) is thinking when you have the benefit of a high-definition television camera trained on him.

From the stands it’s utterly impossible. A dozen burly hulks slither around on the deck for a few seconds and suddenly the whistle blows and the ref indicates which side he has given a scrum or penalty to, but there is absolutely no clue as to why.

In Bath’s case, trying to follow the game is not helped by the fact they have the weakest set of floodlights I have ever seen. You may as well park an old Ford Cortina in each corner of the ground and stick the headlights on.

But at least it means you do not have to witness the true horror that unfolds every time a scrum is awarded. Full marks to the sport for stopping the clock when players are hurt, but to let it run while scrums are organised is just insane.

It would not be so bad if they represented a genuine test of strength and cohesion, but they are mostly an utter shambles, with collapses and resets virtually guaranteed every time and the team with the put-in almost always emerging with the ball.

So football, for all its faults and its grotesque affection for VAR, is a zillion times better than rugby union, which itself lags behind both league and its own seven-a-side variant.

But watching a game at Bath is still thoroughly recommended. It’s friendly, sensationally situated and even though it was pretty much full we did not queue for more than a few seconds for bars or toilets.

Just don’t expect to have much of a clue what’s going on.

In order for future generations to be able to fall in love with football they need to be able to watch it, and the decision to give the rights to the 2021-22 FA Cup to BBC and ITV will be of massive benefit in that respect.

It was great to know so many people were able to enjoy a fantastic third-round weekend, and the sport and the competition will undoubtedly benefit in the long run as a consequence.

Both channels were criticised for their choices of live games, but while it is hard to argue West Ham v Leeds was a peculiar option, it should also be borne in mind that if either station just chases shocks they risk ending up with a bunch of games that are all over by half-time.

FIRST PUBLISHED 5:00PM, JAN 12 2022
Legitimate incursions on to the field of play are a comically bizarre feature of modern-day egg-chasing