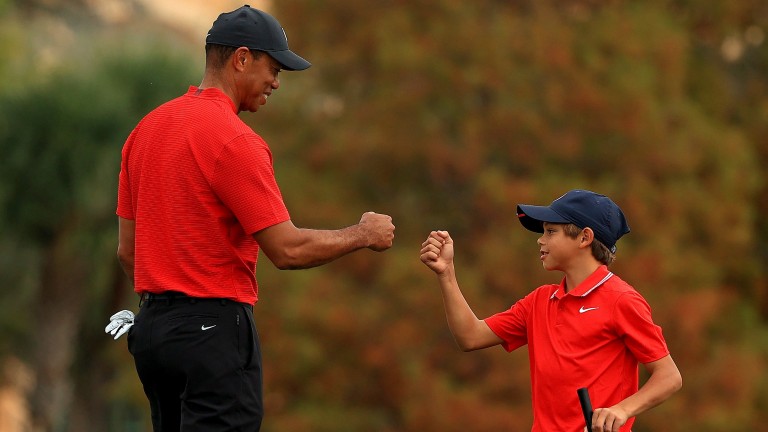 Amid wrestling with Google Classroom the other day and trying to encourage a bored five-year-old to love mathematics while an even more bored one-year-old climbed all over my back like an angry baboon, my admiration for Earl Woods and Gerry McIlroy increased with every passing second.

I have learned an awful lot over the course of almost six years as a parent - the role is nowhere near as straightforward as I assumed it would be - and one lesson has been the realisation of how difficult it is to develop an elite sportsperson.

Since failing to fulfil my hopes of becoming an ES (please let me use this abbreviation for elite sportsperson going forward - ES if used near references of me does not stand for extremely stupid, easily sombre, enthusiastic sweater or eczema sufferer, no matter how accurate the assessment), I have always dreamed of fathering a kid with ES potential.

And now I have. Tommy Tiger Palmer is blessed with magnificent hand-eye coordination, swings a golf club with aggression and speed, and has a work ethic to match his skill, eager to practice 24 hours a day. Be careful what you wish for, guys.

Developing an ES is essentially a full-time job and the weary 42-year-old with responsibility for Tommy Tiger is just not up to the task. It is so exhausting, darting around freezing Blighty fetching balls so Tommy can keep happily smacking his Titleists.

Staggeringly, considering how I felt before I became a dad, I just want to go inside for a nice, warm cup of tea and a few Bourbon Creams rather than collect balls from various garden bushes for hour upon hour.

Golf is all he wants to do. Outside or in the house, he just wants a golf club in his hand and will go into a fit of rage if you dare take equipment away from him.

A few months ago, Tommy insisted on carrying his three-wood when we dropped his sister at her school, and the ever upbeat headmaster, unaware of my occupation, shouted across the playground: "Tiger Woods started at that age!"

I smiled back, mumbling to myself: "Did he, mate? Never heard of him." Tragically, I don't think this one-year-old golfing machine is going to get the fine-tuning it needs from me - I have got too many distractions - and I hate myself for it. I am not Earl Woods.

The one positive is that any resentment I had towards my own father for how little time we spent at golf courses when I was a youngster has disappeared.

One of my favourite childhood memories is being on a pitch and putt with my dad - at a single-figure age - and teeing off on a par-three of about 80 yards and sending the ball soaring through the sky before watching it nestle next to the flagstick. A couple of strangers on the neighbouring hole stopped, applauded and laughed. I will never forget it - they were amused because a little whippersnapper threatened a hole-in-one.

We hardly ever went golfing though. My dad was busy - a high-pressure job as a journalist was knackering - and golf is a time-consuming as well as expensive hobby. I get it now. I completely understand why Dad thought going for a quick swim in the sea and a couple of pints afterwards was a better leisure option.

Raising an ES is not just about being lucky enough to be gifted God-given talent - the potential ES needs parents, or at least one parent, who has sufficient time, energy and focus to properly nurture it. Somebody like Tiger Woods, for example. Tiger's 12-year-old son Charlie is an amazing golfer, as the world discovered when they partnered for a televised father-son competition just before Christmas, during which Coral chalked up just 7-1 about Charlie winning a Major and 10-1 that he becomes world number one by 2040.

I whispered to Tommy while watching the PNC Championship: "Come on, mate - we can't compete with this. Shall we try chess?" But Tommy just stared intently, focused on Woods Senior and Junior.

Tiger used to learn golf at Tommy's age from sitting in a high-chair watching Earl hitting balls into a net. Well, hopefully Tommy learns from the immense amount of golf he sees on television alongside me. While I cheer on just my tips, he supports everyone.

Bryson DeChambeau holed a birdie putt in the first round of the Saudi International, much to my chagrin, and Tommy started clapping like a thrilled walrus who had just spotted an army of sea slugs swimming towards his mouth. The cheeky rascal even chirped: "In hole baby!" as I reeled in agony over DeChambeau's success.

Tommy has certainly got a golfing dad - we had a family game of Kerplunk last Saturday and throughout the session I couldn't stop thinking about a retired plodder I used to back a lot on tight courses - Scott Verplank. But Tommy has certainly got an old, busy, jaded dad, too, who when it comes down to having the time and vigour for days on the driving range, coaching, trips to county competitions, etc, will, sadly, probably fail him.

I need to hit the punting motherlode quickly, so I can become a full-time Earl Woods. If not, Tommy will become Palmer Journalist the III when his destiny should be Stateside replacing Davis Love III on the PGA Tour.