The second half of The Masters field 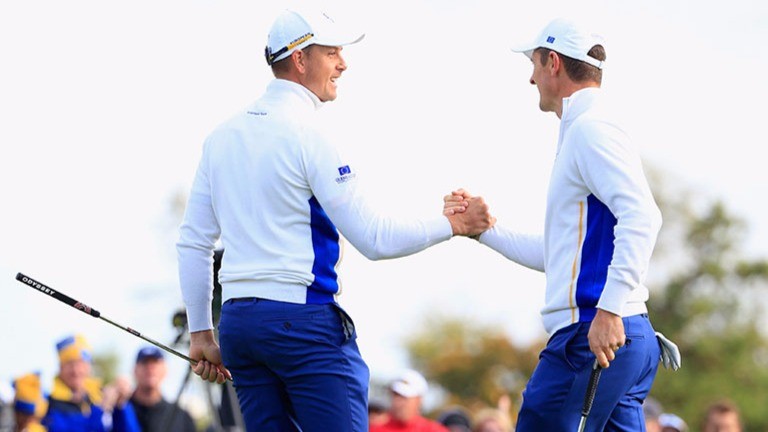 Hideki Matsuyama
The Japanese beast finished 27th and 54th as an amateur at Augusta in 2011 and 2012, but missed the cut on his pro debut when labouring with wrist problems. Returned in 2015 to finish fifth and was seventh last year. His form has dipped over the last seven weeks.

William McGirt
The Carolinan won his maiden US Tour title last year at the Memorial, booking a Masters debut. Unlikely to be a factor.

Rory McIlroy
The former world number one has been on the Augusta leaderboard for the last three years (8-4-10) without seriously threatening to win a Green Jacket. In 2011, the Masters was at his mercy before a final-round 80. He has a helpful shape for Augusta, hitting the power-draw with ease, but carries the pressure of a potential career Grand Slam. A January rib stress fracture has meant only 14 competitive rounds this year.

Phil Mickelson
The three-time Masters champ, whose left-handed fade is the perfect shot for the layout. Tied second in 2015. Can boast 15 top-ten finishes and 11 top-fives. Turns 47 in June, though, and is winless since the 2013 Open.

Francesco Molinari
The accurate Italian withdrew from the WGC-Match Play last time out with a wrist injury. He has a humdrum Masters record of 30-MC-19-MC-50.

Kevin Na
The short-game master battled to 12th spot at Augusta in 2012 and 2015. Has won only once on the US Tour and has never looked good enough to become a Major champion.

Alex Noren
The dashing Swede shot up the world rankings last year by winning four times on the European Tour. This term is not going as swimmingly and the fader seems unlikely to contend on his Masters debut.

Sean O'Hair
The Texan has been labouring with a neck problem over the last few weeks. He is a four-time US Tour champion, but his last victory was in 2011. Tenth spot (2009) is his best Masters effort.

Jose Maria Olazabal
The dual champ goes into battle again at the age of 51. Injuries have taken their toll on the Spaniard and a missed cut is likely.

Louis Oosthuizen
The 2010 Open champion has missed four Masters cuts from eight starts, but he was an Augusta playoff loser in 2012. Inconsistent this term but impossible to dismiss.

Rod Pampling
The Aussie veteran ended a ten-year US Tour drought by winning the Shriners Open in November. Solid Augusta form of 5-16-37, but has played poorly since his shock success.

Pat Perez
Feisty 41-year-old Phoenix man enjoying a resurgence, moving from 333rd in the world rankings to 62nd in the space of 12 events, winning the OHL Classic in November. This is his third Augusta start (45-MC). No value.

Scott Piercy
The aggressive slugger from Las Vegas has finished 54th and 29th in two Masters starts. Has been generally atrocious this year.

Thomas Pieters
The Belgian bomber was top scorer in the Ryder Cup and is a player of massive potential at the age of 25. Needs time to adjust to Augusta on his Masters debut.

Jon Rahm
The 22-year-old Spaniard has taken the US Tour by storm, winning the Farmers Insurance Open at the end of January, then finishing third and second in his first two WGC events. Bursting with talent but making his Augusta debut, and playing in Houston last week was probably an error of judgement.

Patrick Reed
The Ryder Cup colossus has been in poor form since his Hazeltine heroics. Much to prove at Augusta too, where his form figures are MC-22-49. His natural draw and short-game class should make him an Augusta contender, but it is yet to materialise.

Justin Rose
The 2013 US Open champion has never finished worse than 39th in 11 Masters starts. He tied for second in 2015 despite arriving in dire form. A quality ball-striker who will probably be denied a Green Jacket because of his short-game frailties.

Charl Schwartzel
The South African became 2011 Masters champ after a magnificent final-round 66, but has failed to break 70 at Augusta since. Has shown flashes of form this year, but others are preferred.

Adam Scott
The 2013 champion has missed only two cuts in 15 Masters starts. Tied for second in 2011, but has gone under par in just one of his last 11 Augusta rounds. A second-round 77 in Houston last week to miss the cut by a shot further lessened expectations.

Webb Simpson
The 2012 US Open winner has not posted a top-ten finish in his other 21 Majors. Has never bettered 28th place at Augusta. Easy to ignore.

Brandt Snedeker
The putting supremo has twice been deep in contention for the Jacket before imploding (a final-round 77 for third spot in 2008 and a Sunday 75 for sixth in 2013). Nothing in recent outings suggests this is the year he gallops to the winning post.

Jordan Spieth
The Texan arrived at Augusta in red-hot form in 2015, putting brilliantly and cruising to a four-shot triumph. He was in poor form before last year, yet led by five going into the back nine on Sunday before dropping six shots in three holes to finish runner-up. Carded an alarming second-round 77 in Houston last week to miss the cut.

Branden Steele
The Californian missed the cut in his only previous Masters in 2012. He won the Safeway Open in October, his second US Tour title. Almost certainly not Major-winning class.

Henrik Stenson
The Open champion enjoyed the best season of his career last year. This term is not going as well, and a missed cut by five shots in Houston last week was a disturbing Masters warm-up. Has carded a round of 77 or worse in six of his 11 Augusta starts.

Steve Stricker
The 50-year-old part-timer has never bettered sixth spot at Augusta and there is no reason to think Major glory will arrive on Sunday.

Brian Stuard
The 34-year-old journeyman won his maiden US Tour title in the Zurich Classic last spring. Looks like a lamb to the slaughter on his Masters debut.

Andy Sullivan
The Midlander has played poorly this year, off-course issues not helping matters. Missed the cut by seven shots on his Masters debut 12 months ago.

Daniel Summerhays
The Utah man excelled in last year's Majors, finishing eighth in the US Open and third in the USPGA. Masters debut awaits for an out-of-form US Tour maiden.

Hudson Swafford
Florida man made his US Tour breakthrough by winning the CareerBuilder Challenge in January. A Masters debutant who has never made the cut in a Major.

Hideto Tanihara
The Japanese raider punched a late ticket to Augusta by making the semi-finals of the WGC-Match Play. Missed the cut by 12 shots in his only previous Masters in 2007.

Justin Thomas
The 23-year-old bomber has a perfect game for Augusta and can be expected to don the Green Jacket one day. Tied for 39th place on his debut 12 months ago. Has won three of his last 11 events and is full of self-belief.

Jhonattan Vegas
The 32-year-old Venezuelan won his second US Tour title in last summer's Canadian Open. Missed the cut by three shots on his only Masters start. Well short of world class.

Jimmy Walker
The 2016 USPGA champion has Masters form of 8-38-29. Has failed to fire this term and was humbled by Dustin Johnson in the Match Play last time out.

Jeunghun Wang
The Korean does not turn 22 until September, yet he has three European Tour titles under his belt. Lacks Stateside experience and is making his Masters debut.

Bubba Watson
The 2012 and 2014 champion has made the cut in each of his eight Augusta starts. Switched from Titleist to Volvic balls at the start of this year and has been unable to shape his shots as he did previously. Has been putting poorly too.

Mike Weir
The 2003 Masters victor is washed up at the age of 46. Retirement should soon beckon for the injury-plagued Canadian left-hander.

Lee Westwood
The Englishman has finished in the top 11 at Augusta in seven of last nine years, sharing second 12 months ago. Chasing an elusive Major title. Missing the cut by seven shots in Houston last week was a worrying warm-up.

Bernd Wiesberger
The Austrian powerhouse has Augusta form of 22-34. His Major record is poor, with nine missed cuts in 14 starts. A quality ball-striker with a suspect short game.

Danny Willett
The Sheffield star was expecting his first child to be born during the Masters last year, so was a potential non-runner, but Zachariah popped out early to let his dad play. The rest is history as the proud father's final-day charge secured a Major breakthrough. In poor form this year and only three players have successfully defended the Masters.

Chris Wood
Lanky Bristolian missed the cut on his debut in 2010, taking eight at the second, then was 42nd on his return last year. Has been in solid form, but is without a top-ten finish since June.

Gary Woodland
The power-packed Kansas man has humbled Augusta in short bursts, but never bettered 24th spot. Has been playing well for nine months. Arrives suffering from personal anguish after one of his unborn twins died last week.