More words of wisdom from the Soccer Boffin 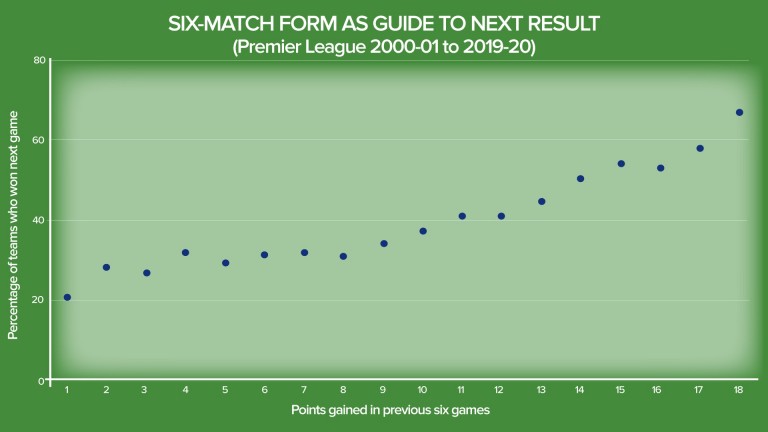 Where have the goals gone? Where did the draws come from? There were only 19 goals in the last ten Premier League games. There were ten draws in the last 20 games. These are the latest trends. Should we follow them and bet on more low scores and stalemates?

Well, hold on a moment. Just a few weeks ago the trends were exactly the opposite: there had been lots of high scores and hardly any draws. There were 44 goals in the second round of fixtures, 36 in the third and 41 in the fourth. Only three out of 38 games in the first four rounds of fixtures were drawn. (Two games scheduled for the opening weekend were postponed so only eight games were played in the first round).

If you had bet on more high scores and wins you would have been caught out by the change to low scores and draws.

The trick in betting, I feel, is to do what bookmakers do. Which is not what they want you to do. It is never easy, admittedly.

When there had been a lot of goals bookmakers invited us to bet on that trend continuing. Experts explained why there had been so many goals and assured us there would be even more. Then there were not.

When something unusual happens everyone talks about it. Bookmakers invite us to bet on it happening again. This means they are betting on it not happening again. And most of the time, what bookmakers do turns out to be right. Between October 2018 and September 2019 British bookmakers won more than £3 billion from bets on sports, horses and dogs.

England manager Gareth Southgate has said: “Football is a low-scoring game with a lot of random events so you can read too much into blips in the data.” Bettors almost always do, bookmakers almost never do.

Most Premier League teams have now played six games. Bookmakers encourage us to follow recent form. They want to bet that it will be reproduced. Often it is not. Often enough for them to come out on top. Comfortably.

Look at the graph. It was compiled with data from the last 20 Premier League seasons, 2000-01 to 2019-20. The numbers along the bottom are points gained from the previous six games. The numbers up the side show what percentage of teams won their next game.

The first thing I notice when I look at the graph is that it is fairly flat on the left – that is to say, for teams who gained a low or middling number of points from their previous six games.

The commonest six-match haul was seven points. For most teams, seven points from six games would be acceptable. It is just over one point per game. If they accumulated points at that rate throughout the season they would almost certainly not be relegated. And for most teams, not being relegated is success.

Any team with one point from their previous six games would be described as in crisis. One point from six games means five defeats, one draw and no wins. Everything said about them would be bad. Their future would be imagined darkly.

This is yet another illustration of why for many Premier League teams there should not be a big difference in what we expect now even if there are big differences in what has happened so far.

Manchester United have seven points and Burnley have one point, though both have played only five games. Burnley v Manchester United was one of the fixtures postponed on the opening weekend. If it had been played, either or both teams would now have a different number of points.

I do think United are better than Burnley. There are many reasons. Most of them boil down to this: United are a bigger club and have been for a long time.

More than 50 years ago, in a book called The Football Man, Arthur Hopcraft wrote: “Burnley, a small town in a scattered region, have always had to rely on home-trained players, because there is not the wealth available to the club of the kind that can be tapped in the great industrial centres.”

These days Burnley buy more players, but they cannot spend as much as United. In recent seasons United’s payroll has been roughly three and a half times the size of Burnley’s. For 2018-19 the figures were £324 million and £87m.

United have been accused of buying players who cost more than they were worth. They have. Even bad-value expensive players will usually be better than good-value cheap players, though. And if United keep splashing cash, sooner or later, if only by accident, they will find that they have got some players who were worth the money.

So I expect United to gain more points than Burnley over the rest of the season, but not because they have gained more points so far. I would feel the same way now if Burnley had seven points and United had one point. My view does not depend on recent form. I think United are untypical of a team with seven points from five games – just as I would think they were untypical of a team with one point from five games.

On that question, I know, bookmakers agree with me. On many others I come up with a different answer then discover I am wrong.

Look at the graph again. For teams who gained more than seven points from the previous six games the win-rate in the next game wriggled upward.

Everton are top of the Premier League with 13 points. This means they have won four, drawn one and lost only one. That is good form. For almost anyone. Of all the teams with that six-match form, how many won their next game? Half.