Tiger Woods's presence could make this Masters the greatest ever 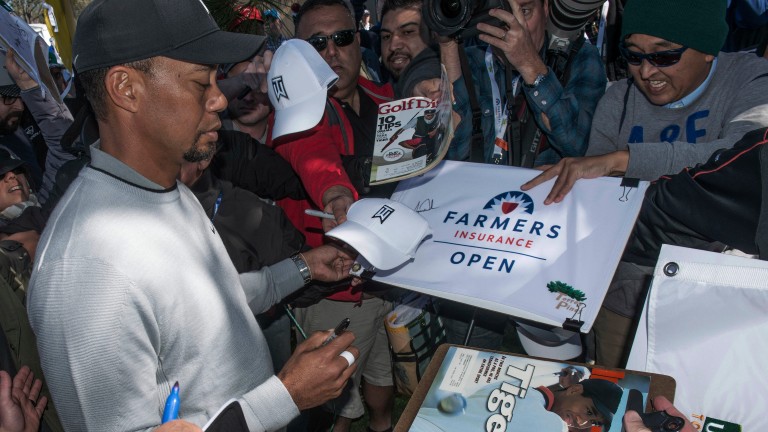 Tiger Woods will be the biggest draw for the crowds at the Masters
Getty Images
1 of 1
By Ian Wilkerson UPDATED 8:32PM, APR 6 2018

They probably thought they would have seen the back of him by now.

Still celebrating the retirement of the other sporting sure thing of the early 21st century when Phil Taylor put his darts in his top pocket for the final time in January, bookmakers could hardly have imagined they would be quaking at the thought of Tiger Woods winning a fifth Green Jacket at Augusta this week.

Yet, despite the plethora of talented 20-somethings who grew up watching the 14-time Major winner during his pomp and will surely battle it out for one of the most eagerly anticipated Majors ever, that's exactly where the layers are.

Bet365's Steve Freeth summed up the mood when he said: "There are so many questions for Tiger to answer, but that hasn't stopped punters making him our worst result of the Masters.

"We are already well into a seven-figure liability for what would be an incredible story."

The firm were going 80-1 when Woods played in the Hero World Challenge at the end of last year, but there is nothing bigger than 14-1 available on the eve of the tournament and he is as short as 11-1.

Three top-12 finishes in his last three outings on the US Tour have left many wondering whether he could do something that seemed almost unthinkable even six months ago.

There seems to be no problem with the back issues that have plagued his efforts to challenge the new generation in the last few years and his short game, which is of such great importance around Augusta National, appears to be in great shape.

He has been averaging 304.2 yards off the tee and while his accuracy is not wonderful, that is probably not too important this week.

The master still has all the tools in his bag.

Those less convinced may point to his absence from three of the last four Masters meaning that he could be mentally rusty on the most demanding of golf courses.

And then there's the fact that no player over the age of 40 - Woods is 42 - has triumphed at Augusta since Ben Crenshaw in 1995, two years before Tiger's first success.

Another factor is that the fear may not be there any more, like it was when he went off at an incredibly short 13-8 before winning the Masters in 2001.

The new generation are geared for the challenge as Jason Day suggested this week.

He said: "I think on my good day I've got a good chance of beating him and I think there are ten, 20 other guys out there that honestly believe they can beat Tiger as well."

Plainly, they're not scared, but if Woods's presence can motivate the game's current leading lights to up their game, then we should be in for a great week.

And, if after all the false starts and personal problems, the world's most famous Eldrick can find some of that old magic, it could be the most memorable episode in the rich and glorious history of golf's greatest tournament.