Golf-betting community on alert for fantastic opportunities at Augusta 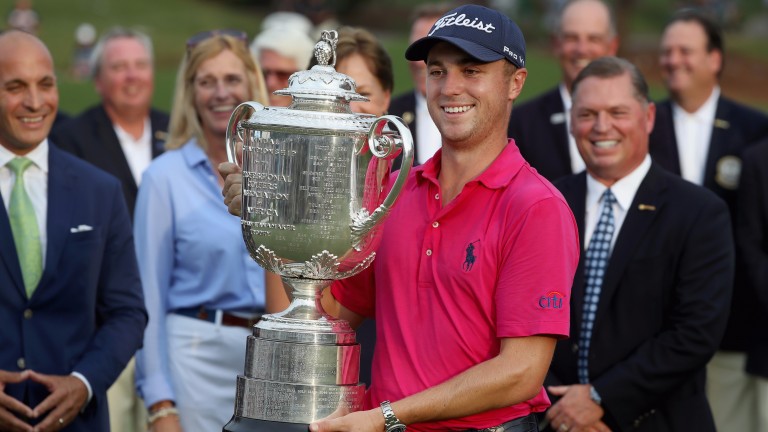 April has arrived and it is time for the betting community to consider some serious golf investments – the best-value Major of the year is upon us and the Masters always provides a fantastic opportunity to make money.

There are just 87 players going to post at Augusta, including ten ageing former champions who have no hope of success and 16 debutants who will almost certainly find this unique assignment too challenging. Fuzzy Zoeller in 1979 is the last man to have triumphed on his first visit.

The list of credible title candidates is 50-strong at most, yet as many as ten each-way places are available as bookmakers fall over themselves to attract new customers for the Majors ahead. Bet responsibly, but bet with passion – because this is about as good as it gets.

Palmer's top tip
Justin Thomas 12-1
The layers have been struggling to identify an Augusta favourite – a situation complicated by a bright effort from Jordan Spieth in Houston on Sunday – but one player arguably deserves to be narrow leader of the ultra-competitive top end of the Masters market.

Many pundits believe it should be Rory McIlroy, who shrugged off a few weeks of dire form with a stunning Arnold Palmer Invitational triumph last month. A reproduction of that aggressive and incredible putting performance would give McIlroy an outstanding chance, but the lightning-fast Augusta greens provide a different challenge.

McIlroy must obviously be respected, but he has to deal with the strain of again chasing the final piece of the career Grand Slam, and the only time he has had a genuine chance of Masters victory going into the back nine on Sunday was during his infamous 2011 meltdown from the front. It must also be noted that in a week when sound strategy is more important than usual, his caddie is making his Masters debut.

Spieth got a little confidence back in the Houston Open, but still finished with a negative strokes-gained putting statistic for the tournament, and the dancefloor demons he has developed over the last few months make him more vulnerable than usual at his favourite track.

Dustin Johnson, poor at the WGC-Match Play last time out, has not been at full throttle and has missed a lot of recent Augusta competition for various reasons, playing the weekend only three times in the last six years. Tiger Woods has missed three of the last four Masters and admitted his yardage books needed heavy revision.

Justin Rose finished 52nd in Houston on Sunday and has no right to be threatening market leadership at a venue where the flair players typically succeed over the solid performers.

The right favourite is the player who has been consistently producing the best golf over the last eight months. Justin Thomas has finished first, second and fourth in his last three events, and he approaches the Masters absolutely bursting with self-belief.

Thomas has won six times on the US Tour from the start of last year, including a Major breakthrough at the USPGA Championship, and the 24-year-old looks set for the world rankings summit.

His game is perfect for Augusta – power on tap and iron shots which go into orbit – and he gets tactical assistance from Jeff Knox, a friend's father. Knox holds the Augusta course record of 61 off the members' tees and has passed his knowledge on to Thomas, while ace caddie Jimmy Johnson can draw upon more than two decades of Masters experience to further aid the cause.

Thomas played well for a three-under-par weekend last year and was sixth in the greens-in-regulation statistics, having a poor week with the putter. He is much more confident in his stroke 12 months later, with his trophy collection rapidly expanding, so expect progressive Masters form figures of 39-22 to make another leap in the right direction.

Thomas has fond memories of Georgia, where he became FedEx Cup champion with second place in the Tour Championship in September, and he is always happy to inform Twitter followers that Augusta is his favourite Major venue.

Win-only punters should take the 12-1 with Ladbrokes, but the best each-way option is 10-1 with Sky Bet, getting ten places.

Next best
Patrick Reed 50-1
The nickname of Captain America was earned by Patrick Reed for his Ryder Cup heroics and this big-stage performer could be ready to follow his outstanding work for the USA with Major glory for himself. Second place in the USPGA in August was a strong hint.

Reed has the perfect game for the shape of Augusta – a heavy draw is his stock shot – and he has the magic touch to handle the notorious greens. The 27-year-old is yet to do himself justice in the Masters, failing to better 22nd place in four visits, but he has served his apprenticeship and arrives more confident than ever.

Equipment issues were holding back Reed after he left Callaway, but he got them sorted at the start of last month and is thrilled to be using the Titleist ProV1. Second place at the Valspar Championship was followed by seventh at Bay Hill and a run to the knockout stages of the Match Play, an event where he beat Spieth before being defeated by a buzzing Alex Noren.

Reed starred for Augusta University as a young amateur and the greatest moment of his professional career could come in the same city.

Woods's comeback from injury is getting all the column inches, but Cantlay also has a tale to tell. He was world number one amateur for 54 weeks and on course to become a superstar until losing the best part of three years to back issues. Since his return in February, he has played 20 events, has not finished worse than 51st, won his maiden US Tour title and rocketed up to 35th in the world rankings.

Cantlay made his first and only Masters appearance as an amateur in 2012. He had a crazy level-par final round where he carded a nine at the 13th and a six at the 14th, before responding by covering his final four holes in four under par to pip Hideki Matsuyama for the low amateur prize.

Cantlay thrashed Matsuyama in the WGC-Match Play last time out, when he was narrowly eliminated at the group stage, and this class act seems a Major champion in waiting at the age of 26. He has the temperament and ball-striking ability to upset the odds.

Henley was born in Georgia, attended the University of Georgia, and has won a Web.com Tour event in the state. Progressive Masters form of MC-31-21-11, allied to a final-round 65 (the best score in the field) in Houston on Sunday, make this deadly putter a runner.

Henley, 29 next Thursday, is a three-time US Tour champ and his first child is due on April 15. The outsider could freewheel to Major glory with more important matters taking his mind off the golfing pressure.

Get our FREE weekly racing betting email with invaluable punting pointers for the weekend's action...