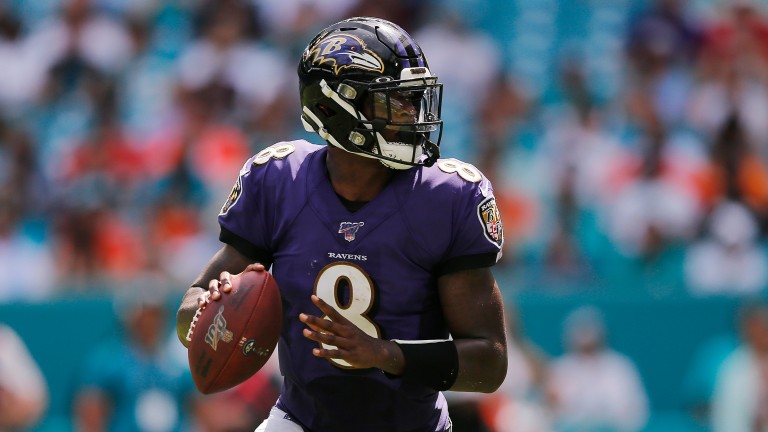 Lamar Jackson put in an excellent performance for the Baltimore Ravens
Michael Reaves
1 of 1
By Ian Wilkerson 1:06PM, SEP 11 2019

Here's our verdict on a lively Week One in the NFL

The Ravens dominated in a 59-10 thrashing of the hapless Miami Dolphins.

They may have been facing arguably the weakest team in the league, but six first-half touchdowns against Miami means life is good in Baltimore.

Lamar Jackson put on a show following Joe Flacco's departure to Denver, throwing five touchdown passes while running back Mark Ingram went over twice on his debut after moving north from New Orleans.

They are 25-1 for the Super Bowl and suddenly there is optimism in Maryland.

Kansas City were hit hard in the early stages of their clash with Jacksonville. Or rather Tyreek Hill was.

The Chiefs' wide receiver suffered a serious shoulder injury on just his second catch of the day against the Jaguars, but former Buffalo wideout Watkins stepped up to the plate.

Playing with big-armed passing phenomenon Patrick Mahomes must be a dream for any receiver and Watkins relished the extra attention, matching his touchdown tally for the whole of 2018 with three scores.

A total of 198 receiving yards meant, five years after Buffalo drafted him as fourth overall pick, Watkins has showcased his potential to be a key performer for Andy Reid's team.

3  Away teams in early kickoffs

Green Bay led the way by heading to Soldier Field on opening night to claim a 10-3 success and there were plenty of other visitors who enjoyed a trip away.

The Los Angeles Rams, Tennessee, Kansas City, Baltimore and Buffalo all triumphed, while Minnesota ensured they kept their house in order by beating Atlanta.

Philadelphia fought back from a 17-point deficit to beat NFC East rivals Washington 32-27, but Redskins backers were still celebrating as they covered the ten-point handicap.

But that just gave an opportunity to his back-up Ekeler, who made 58 rushing yards and 96 receiving yards the Chargers' 30-24 win over Indianapolis.

He scored three touchdowns, including the winning score in overtime. No need to rush back, Melvin.

No team has been more hyped than Cleveland this season but the Browns were brought back down to earth by a 43-13 home humbling by the Tennessee Titans.

Everything fell apart after the Browns scored the opening touchdown and a mammoth total of 18 penalties for 182 yards was a major issue. Left tackle Greg Robinson was ejected early on for kicking Titans safety Kenny Vaccaro and when Kendall Lamm was injured, they had just five offensive linemen available for the rest of the game. Even quarterback Baker Mayfield was affected, throwing three fourth-quarter interceptions as the Browns tried to chase the game.

The Browns have not reached the playoffs since 2002, but it seems there is still plenty of work to do.

Dolphins fans will be taking a keen look at next year's draft after they were thumped at home to Baltimore. It looks, even at this stage, they could be picking first in May.

There are plenty of new players in South Florida and it may take them time to gel. But that's being kind. The Ravens racked up a whopping 643 yards against them and this probably isn't going to be the last time they feature in this column.

It's the Patriots this week, and handicappers could be struggling to find a line high enough to put off New England backers.

It may be a touch harsh to suggest there was joy in Jacksonville when Blake Bortles left the Jaguars, but there was little doubt the capture of Nick Foles was seen as a massive upgrade.

After all, it is only 19 months since the stand-in quarterback was the star turn as the Philadelphia won their first Super Bowl.

However, on Monday, he underwent surgery on a broken collarbone sustained while he was completing a touchdown pass to receiver DJ Chark in their defeat to Kansas City.

He's out indefinitely, meaning rookie Gardner Minshew takes over. His first performance was impressive - he threw for 275 yards with two touchdowns and one interception - but the loss of Foles is a body blow.

Buffalo committed four turnovers in their six possessions and the Jets scooted to a 16-0 lead against one of their AFC East bitter rivals, yet they still didn't win.

It was the first time the Bills had recovered from such a margin to win since 1997.

If the Jets are going to better last year's tally of four wins, they cannot get into these sloppy habits.