Saints should prove too solid for Clarets 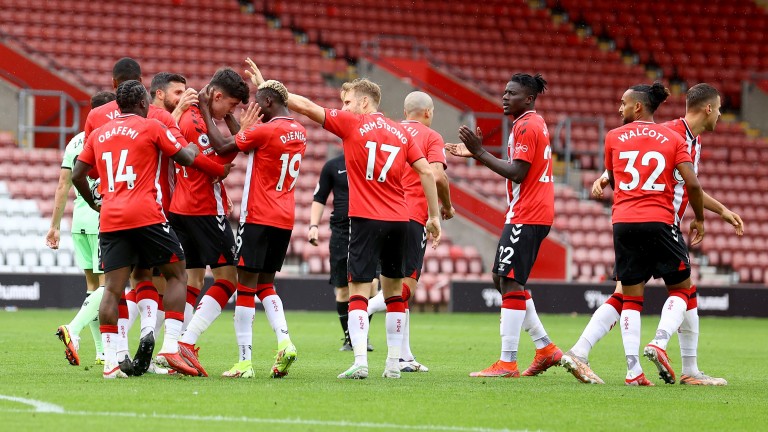 The Premier League table might suggest otherwise, but Southampton are playing far better than a side in 15th place and they can emphasise that by taking care of winless Burnley at St Mary's.

It hasn't been the easiest of starts to the season for Ralph Hasenhuttl's side but with trips to Everton, Manchester City and Chelsea ticked off they should be feeling good about themselves. Saints were excellent at City, where they were robbed of a penalty in a 0-0 draw, and competent at Stamford Bridge, where they were heading for another point until James Ward-Prowse's late red card.

Rather than feeling sorry for themselves they simply went and utterly outplayed Leeds last Saturday, when the 1-0 scoreline to Southampton flattered the visitors rather than the hosts.

Sean Dyche's men haven't won any of their last 11 top-flight matches and a club who have looked to be on borrowed time for the last year or so, suddenly appear hugely vulnerable.

Accrington were the final opponents Nigel Adkins took on as Charlton manager on Tuesday night and embattled Portsmouth chief Danny Cowley may be pushed closer to the edge by Stanley at the Crown Ground on Saturday.

Whatever happens, don't expect it to be dull – games featuring these two rarely are this season.

Accy won 3-2 at Charlton and Coleman was the first to admit it could have been 5-5. They score goals – they've scored two or more seven times this term – but also concede, having shipped at least two in eight fixtures.

They'll go after Portsmouth, who are an accident waiting to happen at the back having been hit for four by Rotherham and Ipswich in their last two matches. Eight of Pompey's last ten matches have yielded three goals or more and it would be a surprise if this one doesn't join that list.

Just three points separate Wolfsburg and Freiburg in the Bundesliga but these two are on different journeys right now and the visitors have to fancy their chances.

Freiburg are flying, the only team in the German top division to still be unbeaten, a record built on the best defensive record in a competition where goals tend to fly in.

They've beaten Dortmund and Christian Streich has got them playing some nice football.

They've also had the benefit of a week to prepare for this whereas Wolfsburg were in action on Wednesday night against Salzburg in the Champions League, giving them under three days to get ready for this.

Mark van Bommel's men seem to be struggling with the European-domestic double headers given they've not won in six since the Champions League group phase began.

And to make matters worse for Van Bommel, he must do without top scorer Wout Weghorst who is quarantining after catching Covid.

Banker
Tranmere
Prenton Park has become a fortress where Tranmere have won five on the spin and they can make it six against Northampton.

Blowout
Ipswich
It's fits and starts for Ipswich who are as likely to throw away a two-goal lead as beat a side 4-0, making them hard to trust at odds-on against Fleetwood.

Both teams to score